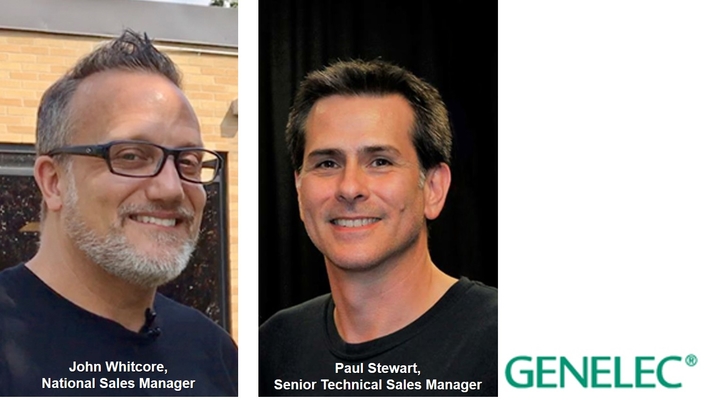 Whitcore is a highly accomplished, reputable, and results-driven sales leader with 20+ years of industry experience.

Prior to joining the Genelec Inc. team, he managed U.S./Canadian east coast pro audio sales for Avid Technology, where he maintained a successful track record of exceeding sales quotas, retaining quality clients and enhancing team productivity, leading to a significant increase in customer satisfaction, repeat business and company profitability. He specializes in generating new business and developing relationships with his unique ability to immediately establish customer and team rapport, trust and loyalty. He is driven by his passion for music, great sound and technology.

Stewart, a graduate of the Berklee College of Music, draws on nearly 20 years of experience (12 of which have been at Genelec) in professional audio sales to high-end production facilities and individual artists around the globe. Prior to joining Genelec, as a project consultant he provided design expertise from equipment specification to layout and system integration. Stewart has designed and installed numerous wiring systems in recording studios as well as home theater and multi-media rooms. He will continue to employ his extensive contacts with major studios, engineers, producers, artists and record companies nationwide to further strengthen Genelec’s network of business partners.

“Recently, Paul and John have been cornerstones of our sales force nationwide,” stated Kaufmann. “We thank them for their ongoing dedication to the Genelec brand, and we look forward to their continued success in their new positions in 2018 and beyond.”

Genelec, the pioneer in Active Monitoring technology, is celebrating 40 years of designing and manufacturing active loudspeakers for true and accurate sound reproduction. Genelec is credited with promoting the concept of active transducer technology. Since its inception in 1978, Genelec has concentrated its efforts and resources into creating active monitors with unparalleled sonic integrity. The result is an active speaker system that has earned global acclaim for its accurate imaging, extremely high acoustic output from small enclosures, true high-fidelity with low distortion, and deep, rich bass.