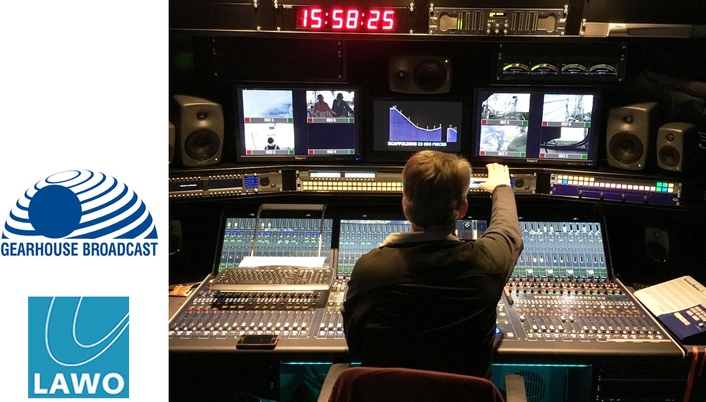 Operating fully in 4K and with up to 16 cameras, Columbus is Gearhouse Broadcast USA’s newest OB Mobile Unit – and one of the most technologically sophisticated  on the road. Requiring the flexibility to serve both large sports and entertainment productions, Gearhouse turned to equipment from German Broadcast manufacturer Lawo for many of the critical components of the impressive build.

While Gearhouse Broadcast’s UK-based systems integration team handled the build, the truck is available for 4K and HD productions in the US. With up to 16 4K/HD cameras, six additional inputs for RF cameras, a full 4K monitor wall – the first in the US – it relies on the sophisticated control logic of Lawo’s VSM System plus high-end audio tools and IP-based video processing equipment also from Lawo. With these resources, it can manage the most demanding productions in the live business, sports and entertainment alike, with a particular focus on the US market.

Key to enabling Columbus to accommodate both large sports and entertainment productions is its powerful and flexible audio section – and this is where a Lawo mc256 digital audio console comes into play. Large and ambitious live productions require high DSP performance and channel counts, as well as direct access to many audio channels via fader – which Lawo delivered. Columbus is equipped with a 64-fader mc²56 audio console in a 48-bay frame with an integrated routing matrix of 8192 x 8192 crosspoints. The console offers 540 full processing channels, 64 AES I/O on the main core with 32 MADI and 4 RAVENNA/AES67 interfaces. For peace of mind, the console has a fully redundant architecture.

Through the deployment of the mc²56, Lawo addressed Gearhouse’s requirements for many faders in a small footprint, as well as providing custom configuration to address a wide range of workflow requirements. The meter bridge shows all fader Ievels clearly on the console’s HD touchscreen displays, with multi-row metering allowing easy viewing of all fader levels as well as signals from other layers or banks. For further customization, the overbridge also accommodates additional modules, such as a user panel or RTW goniometer. 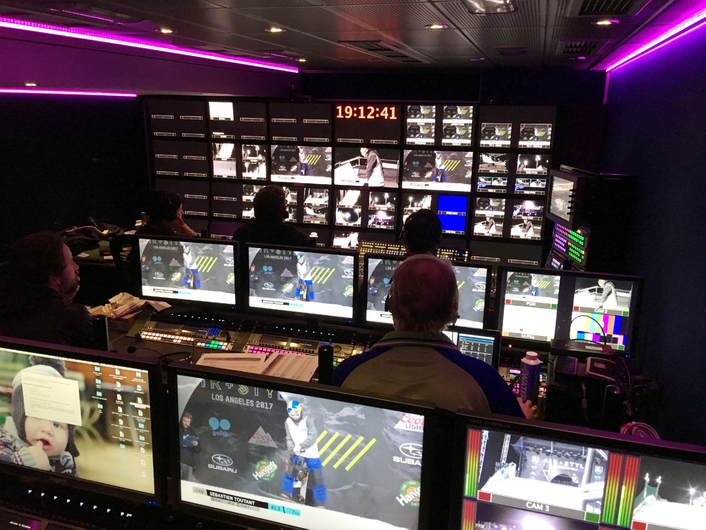 Production Area in the Columbus Truck

At the heart of the OB truck is a VSM control and monitoring system on redundant servers that has access to and controls all relevant hardware in the OB. By means of several hardware control panels plus software touchscreen-based panels, operators are assured the highest degree of flexibility and ease of use. With VSM, users have access to the routing parameters of the Imagine Platinum routers and multiviewers, the Grass Valley Kayenne vision mixer, and the RTS intercom, as well as the Lawo mc256 audio console and DALLIS frame.

Using the VSM panels, operators can prepare and save complete workflows in advance of a production, and can recall complete global snapshots of the whole truck with a button-push shortly before going live. In addition, the VSM system acts as a full tally and labeling system with no need for a dedicated single tally solution – a major benefit in terms of shorter setup times, preparation and user training.

A further part of the installation involves three Lawo V_pro8 8-channel video processors, which allow interfacing of different video formats, as well as audio management, frame synchronization and embedding and de-embedding of audio to the 4K signals. Already a flexible and capable unit, its recent update has made the V_pro8 yet more powerful – including an update to its A/V sync tool, which in addition to the native V__line sync pattern and the EBU pattern, can now also read the Vistek VALID8 format. 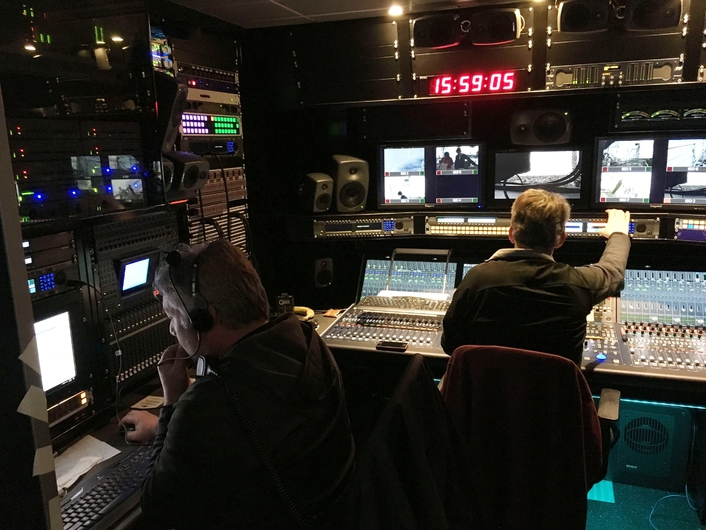