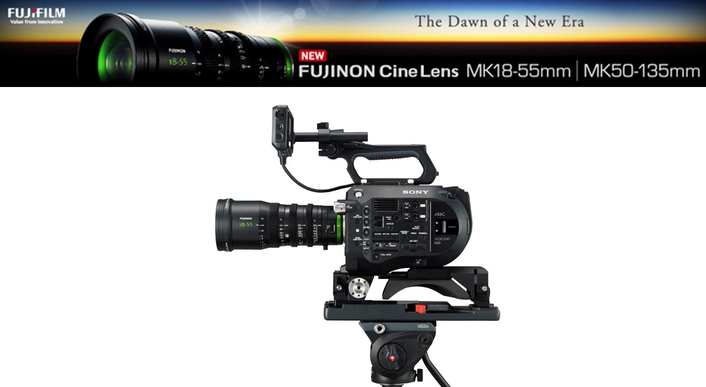 The rapid growth in popularity of movies made by emerging cinematographers in recent years, including corporate and commercial movies on the internet and other venues, has increased the opportunities for shooting movies using cinema and regular digital cameras, and it boosts demand for high-performance cinema lenses that deliver high resolution and advanced scene-depicting capability.  For filming such materials, interchangeable lenses for digital cameras are often used instead of cinema camera lenses as they are more affordable and mobile.  However, these lenses are designed primarily for shooting still images, and therefore prone to problems such as focus shift and optical axis shift while zooming, and so on.

In response, Fujifilm has developed the MK series of cinema lenses that resolve these issues while still offering advanced optical performance and an ultra-compact and lightweight design - all at an affordable price.  The MK18-55mm that was launched in March this year has been popular among emerging cinematographers who praise it for its edge-to-edge sharpness and ease of handling thanks to its compact and lightweight design.

The new MK50-135mm is a telephoto zoom lens that covers the focal length from 50mm to 135mm.  It has the maximum T-stop value of 2.9*1 across the entire zoom range, enabling to shoot with a shallow depth-of-field with beautiful bokeh.  The lens is compatible with E-mount*2 cameras with the Super 35mm*3 / APS-C sensor.  It incorporates the benefits of short flange focal distance*4 into optical design to the maximum extent to achieve advanced optical performance while maintaining a compact and lightweight design.  The lens design is optimized for shooting movies, minimizing focal and optical axis shift while zooming and lens breathing (change of angle of view during focusing) – negative traits that are typically observed in still lenses for digital cameras.  The lens also features three rings to enable manual and independent adjustment of focus, zoom and iris (aperture), all with the gear pitch*5 of 0.8M (module).  The focus ring can rotate fully up to 200 degrees to facilitate precise one-handed focusing.  These features make the lenses comfortable to operate. 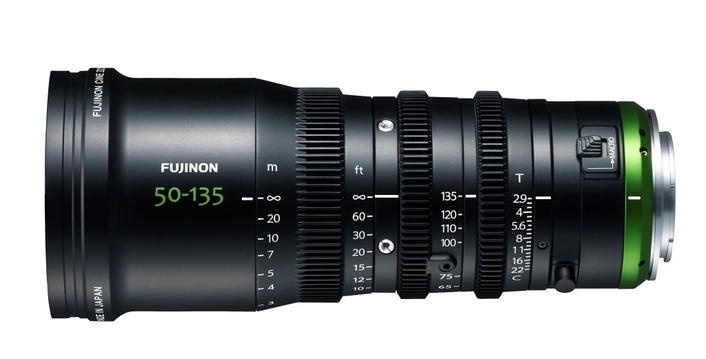 The MK50-135mm can be combined with the MK18-55mm to form a compact and light weight kit that covers the most frequently-used focal lengths between 18mm and 135mm, accommodating a variety of subject matters including landscape, architecture and portraiture.  They share the common front element diameter, filter thread and three-ring gear positions, allowing users to share the use of the same accessories such as matte box and filters.  This eliminates the need to re-adjust accessory positions when changing between lenses, streamlining operations in frontline video production.

The X Mount versions of MK lenses (with the focal lengths of 18-55mm and 50-135mm) for Fujifilm’s X Series of digital cameras (APS-C sensor) are currently under development, and due to be released by the end of this year.

FUJINON lenses offered by Fujifilm have been used at movie / CM / TV production sites around the world for their advanced scene-depicting capability. Tapping into its optical design, high-precision processing and assembly technologies that have been nurtured over the years in the cutting-edge field of video production, Fujifilm will continue to expand its lens line-up to meet the diverse needs at the video production industry.

FUJIFILM Corporation is one of the major operating companies of FUJIFILM Holdings. Since its founding in 1934, the company has built up a wealth of advanced technologies in the field of photo imaging, and in line with its efforts to become a comprehensive healthcare company, Fujifilm is now applying these technologies to the prevention, diagnosis and treatment of diseases in the Medical and Life Science fields. Fujifilm is also expanding growth in the highly functional materials business, including flat panel display materials, and in the graphic systems and optical devices businesses.

About Fujifilm in Europe