Active globally ever since its creation in 2007, the Broadcast Academy by HBS has experienced something of a momentum this year, and the autumn months look unlikely to be a change of pace for its experts

This year has seen the Academy broadening its partnership with the Asia-Pacific Broadcasting Union (ABU). The Union had previously worked with HBS to set up two successful training programmes aimed at live coverage of football. The organisation had been looking to offer a wider range of training modules matching its members’ needs and the Broadcast Academy was the ideal partner to assist them in doing so.

During 2016, the Broadcast Academy also cemented its position as a technological pioneer. In April, it teamed up with broadcast equipment firm EVS to develop the ground-breaking Live TV Simulator. The new simulator is used to train sports production teams in live direction skills. It includes live video servers – enabling up to 16 ISO camera feeds for ingest/playout, instant replay and slow-motion tools and a live video switcher that can be used by multiple trainees simultaneously.

The Live TV Simulator has been built in the EVS premises in Belgium, but on 5 September, it was shipped to its new home, the Broadcast Academy offices in Boulogne/Paris. Pre-cabled, easily transported and able to be set up at any customer’s location, the HBS/EVS simulator will be used both during trainings in Paris, and on-site, when Broadcast Academy’s experts travel to their clients’ base.

The Simulator is now up-and-running and tailor-made trainings are already in full swing. Broadcasters from China and the Middle-East were first to experience the new Simulator during the month of September. More modules will be delivered in October and November. 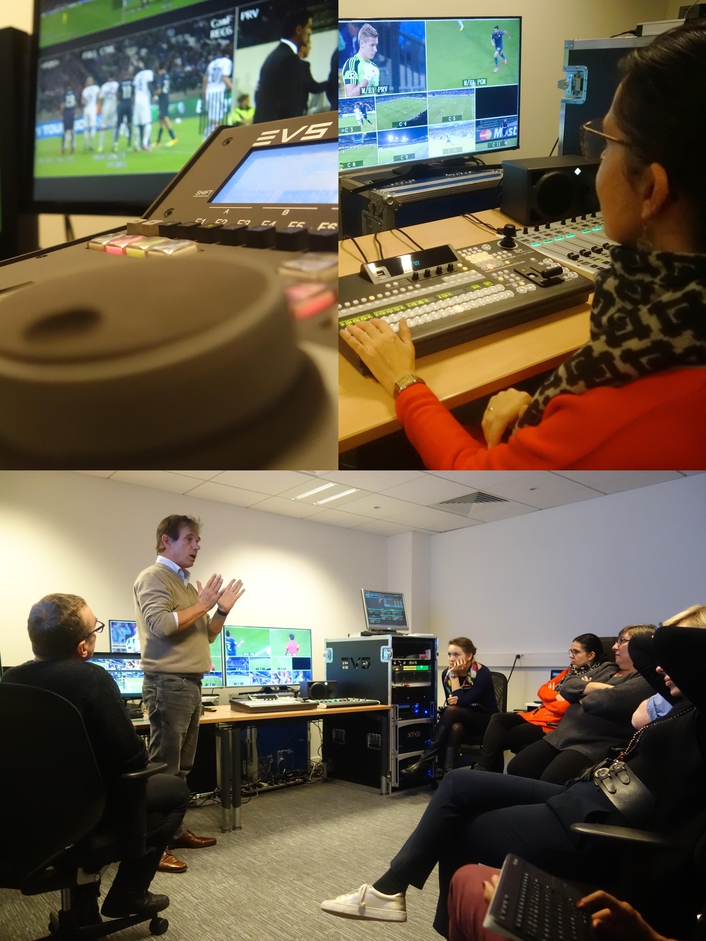 Before the end of the year, the Broadcast Academy will also have showcased its knowledge and know-how at different landmark events for the broadcasting industry. In September, Lise Cosimi, Director of HBS’ Broadcast Academy attended the International Broadcasting Convention (IBC) in Amsterdam where she met partners and promoted the missions of the Academy. From 21 to 24 October, she will participate in a workshop session held by UNESCO; she and representatives from African countries will discuss the actions required of the broadcast industry to promote gender equality.

Lise Cosimi will then travel to Bali, Indonesia to meet with Broadcast Academy’s partner ABU and to attend the General Assembly and Associated Meetings to present new trainings modules to the members of the Union and to exchange insights about the shift to online video and the impact of new media for traditional broadcasters.

Finally, Sportel, held every year in Monaco at the end of October, will be the opportunity to recap the highlights of the past year and to present to leaders of the industry, as well as specialised journalists, the new and innovative features offered by the HBS’ Broadcast Academy.