HBS carries out "smart production" test with Hawk-Eye and EHF 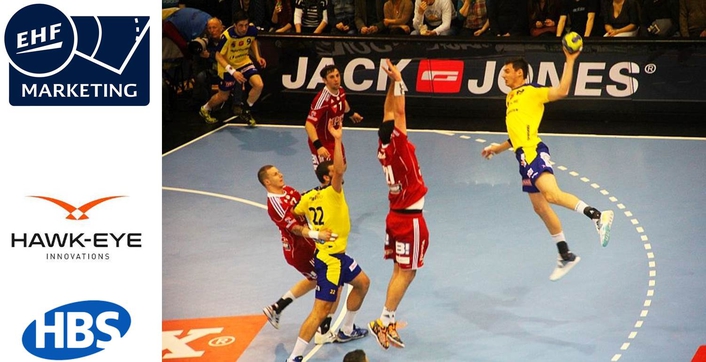 During the 2016 Men’s EHF Cup Finals which took place in Nantes, France on 14-15 May, leading sports technology company Hawk-Eye tested a new “smart-production” system under the supervision of HBS’ production experts Julien Bertin and Olivier Meaux Saint-Marc. This unique “smart” method enables each cameraman to operate several cameras by pre-setting them. 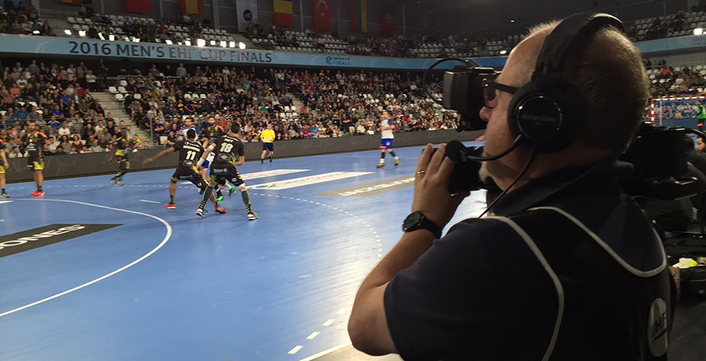 The HBS/Hawk-Eye “smart production” coverage consisted of eight cameras and offered a traditional but varied panel of angles: centre, left behind goal, right behind goal, court level handheld, opposite and in-goal. This production plan covered all areas of the court to offer fans a complete viewing experience. The positioning of the cameras assisted the audience to understand referee decisions, the players’ facial expressions, as well as the atmosphere within the stadium.

Out of the total eight cameras, two were manned and two were fixed in-goal cameras. The four remaining cameras were operated remotely by two operators. Each operator controlled one camera while a second device was slaved to the movements of the first one. Five people were sitting in the small OB Van outside of the arena: the match director, a replay operator, a graphics operator plus the two camera operators.

By pre-setting the remotely operated cameras with three different focal lengths (wide, mid-shot and close-up), HBS and Hawk-Eye operators could ensure that the cameras did not overlap or cover the same portion of the court – hence the term “smart production” system. Thanks to this setting, they were able to deliver complementary cuts that followed the heart of the action. 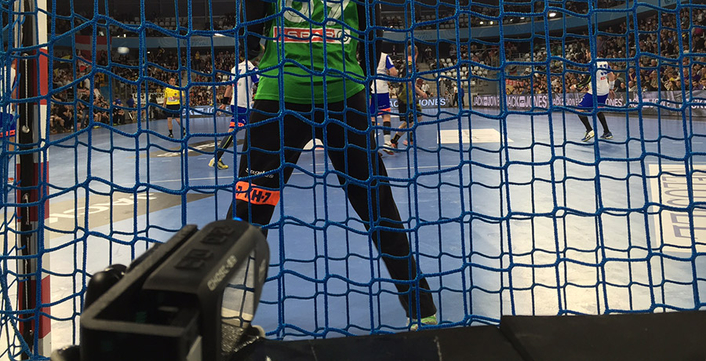 Truly ground-breaking, the partially-remote production plan offers a very exciting perspective for cost-effective production solutions. While some sport-specific development is required, full implementation is expected in the coming months. The system has seen three years of operation in tennis, basketball and rugby and the quality of the footage compares to a classic, fully-manned production plan, but does require training on how to best capture the respective sports.

The potential of “smart production”, based on remotely operated cameras and a software platform, is limitless and various sized set-ups can be offered. Implementing such set-ups represents a cost-optimised solution for event organisers or sports federations that want to strengthen their outreach without the increase in expenditure usually associated with traditional broadcasting solutions. The introduction of such “smart production” systems will help enable exposure for lesser-known sports and allow organisations to bring the sport to their fans and attract new sponsors and potential TV networks.

Working with EHF Marketing GmbH (EHFM) has been a rewarding experience for both HBS and Hawk-Eye, especially because the tests were carried out during an anticipated, top level event. The EHFM has always been a pioneer in terms of innovations and its interest in this new “smart production” system is proof of its open-mindedness and commitment to improve live production of events and optimise the production costs associated with an event of this scale. 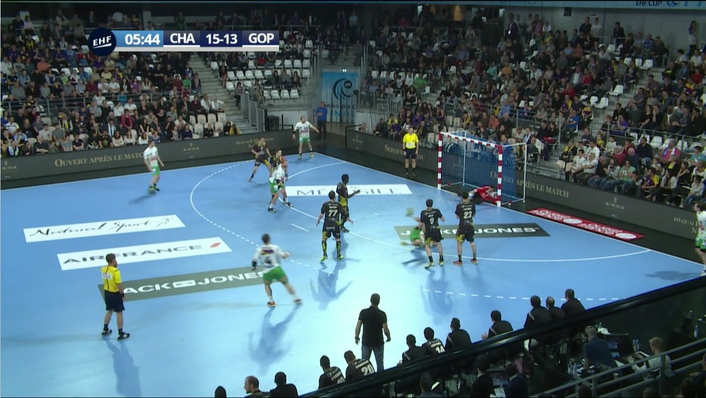 EHF / EHF Marketing GmbH
The European Handball Federation (EHF) is the umbrella organisation for handball throughout Europe with its headquarters in Vienna, Austria. The federation is responsible for top club and national team competitions.
EHF Marketing GmbH is the marketing arm of the EHF. The company works closely with marketing and media partners, as well as with Europe’s leading clubs to realise the full potential of the sport on the international sports market. EHF Marketing GmbH is responsible for the marketing and media rights of club competitions including the VELUX EHF Champions League, Women’s EHF Champions League and the Men’s EHF Cup.

Hawk-Eye
Hawk-Eye is a leading innovator in sports technology. First used as a broadcast tool to analyse decisions in Cricket and Tennis, Hawk-Eye has now become an integral part of over 20 sports and every year covers many thousands of games or events across 400+ stadiums in more than 50 countries. Hawk-Eye is a fully owned subsidiary of Sony and has offices around the world.

HBS
Established in 1999, Host Broadcast Services (HBS) is a 100% subsidiary of Infront Sports & Media. As such, it is part of the Chinese conglomerate Dalian Wanda Group and has an active role in its sports division, Wanda Sports.
Based in Switzerland, but with its planning headquarters in Paris/Boulogne, HBS has built a CV boasting four highly successful FIFA World CupTM as FIFA’s Host Broadcaster, multi-sport broadcast operations and projects across four continents in 2015 alone. The progression of the company has been marked by technical and digital innovation, with each passing event noted for making broadcast history in one way or another.