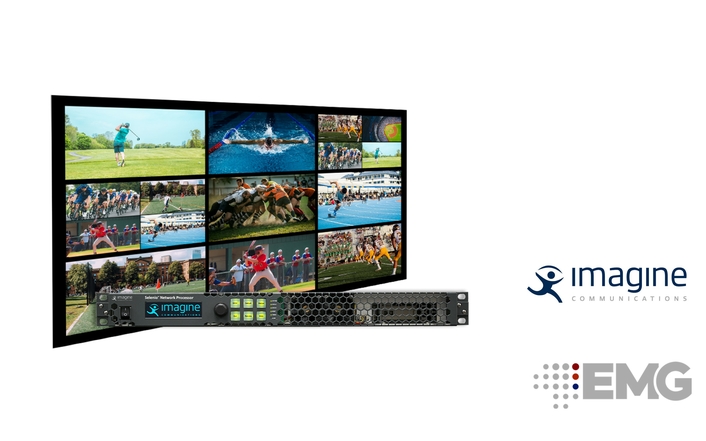 EMG is a leading global provider of broadcast services and media solutions for live sports, entertainment and events. The group combines unique expertise and experience to master the entire value chain, from image creation to distribution. A significant part of our business lies in covering major sporting events.

Sports broadcasting has always driven technology development: viewers demand more cameras and more angles, more replays, more graphics and more resolution like 4K and HDR UHD. To stay ahead of the curve, we continuously strive for solutions that add value to the production yet deliver savings in costs and people. One way in which we do this is through the use of IP connectivity to centralise control and increase remote access.

To this end, we have developed our IP fly-pack system, which we call diPloy. This is a completely modular production system, built into modular racks of varying sizes in dedicated 40-foot containers, which allows us to plug together the functionality we want for each particular job. By creating modules at the flight case level, we can physically place modules where they are required: some close to the action, some at any distance.

One of the first major uses of diPloy was at a major multi-sports event held in Japan in the summer of 2021. We were responsible to the host broadcaster to deliver much of the technical architecture. 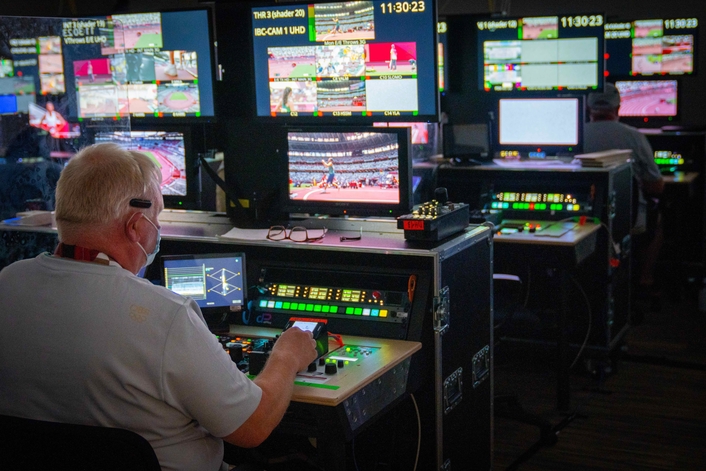 The heart of the event was the athletics stadium. This venue hosted the opening and closing ceremonies, as well as a full programme of track and field events. To cover all requirements, and to provide full redundancy for the opening ceremony, we built a total of eight similar control galleries. These were physically sited in the broadcast compound, some 500 metres from the stadium itself.

The first requirement was to bring the outputs of cameras and microphones from within the stadium to the control rooms. This used a diPloy rack within the stadium, into which cameras and microphones were connected. Dark fibres then carried the uncompressed IP signals to the broadcast compound, where they were made available for production, via IP.

Cameras were mainly 4K HDR UHD units, although some POV cameras worked at different resolutions. Connectivity was mainly IP, but the diPloy racks could also accept SDI inputs. At the control room end, while much of the switching was in the IP domain, we used existing replay servers ― again with SDI outputs, which needed to be converted to SMPTE ST 2110 IP.

The Great Workhorse of diPloy
Critical for diPloy is the Selenio Network Processor (SNP) from Imagine Communications. The SNP is a powerful and compact appliance that uses software to provide a whole range of functionality. Each 1RU SNP has four independent processors, each with eight 3G processing paths with software “personalities” readily changed to do what you need at any moment.

That includes SDI to IP conversion; up-, down- and cross-conversion and colour space transforms; video processing and audio shuffling; point multiviewers and much more. It also provides the interface to high-speed IP connectivity between units: up to 400 gigabit ethernet over fibre in the current version.

As the industry moves towards higher resolutions, European broadcasters are currently looking towards both 4K and HDR, while American channels want 1080p HD with high dynamic range colour. SNP incorporates these conversions so we can offer different outputs to different feeds simply and transparently.

We can change what each processor path in each SNP can do with the click of a mouse. It is an excellent combination of power and flexibility, and we regard it as the great workhorse of diPloy.

This summer in Tokyo, it was SNPs that converted incoming signals and multiplexed them onto fibre for delivery to multiple galleries, where more SNPs split the feeds out for production. It does this completely transparently and with virtually no latency. As far as the crew is concerned, the performance is just the same as having SDI cameras plugged into the tailboard of a truck.

To build eight galleries in the stadium that would only be used for a small proportion of the multi-sport event would be highly inefficient. So we used further diPloy racks, again equipped with SNPs, to cover events at other venues, to be produced from the stadium. 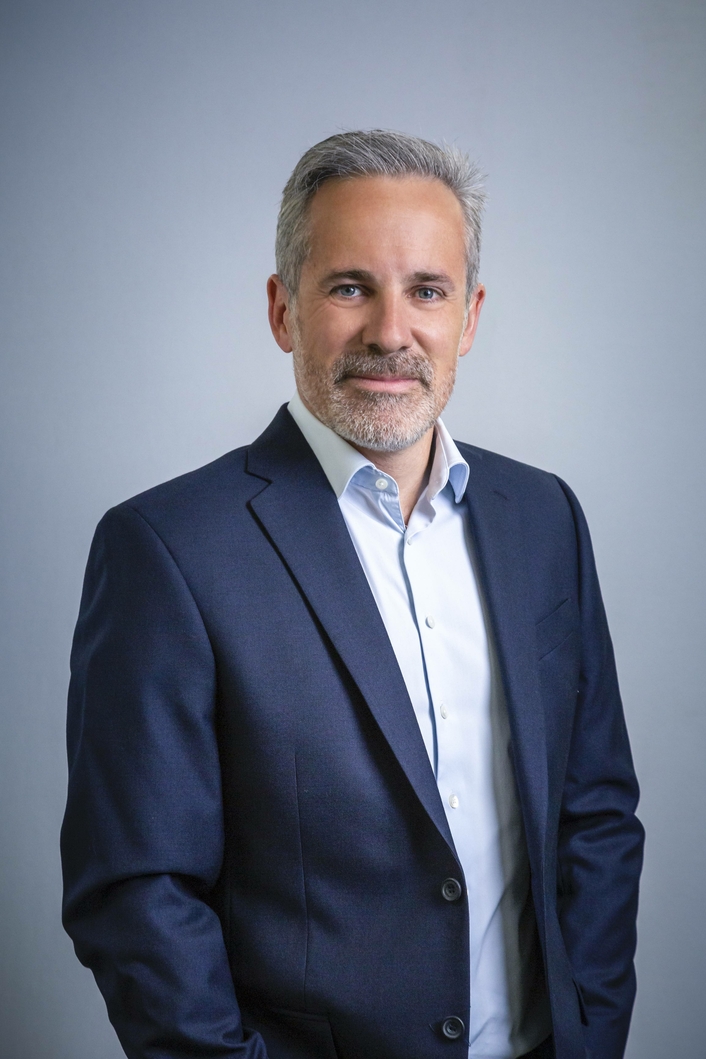 The road cycling, for example, was based more than 100km away, but was successfully cut and mixed in one of the stadium galleries. SNPs in the diPloy racks at the venue multiplexed all the signals onto a high-bandwidth IP link.

The coverage of the cycling also involved cameras on motorbikes, helicopters and fixed wing aircraft. The receivers for these were positioned to get the best live reception, and where necessary, further SNPs were used to connect the downlinks to the control room. The latency as the signals were converted, multiplexed and presented to the production switcher was so low that the director did not notice.

The future for diPloy
What this event gave us was a very demanding, very public proof of the diPloy concept, which successfully separates the source of signals from the production capabilities. Away from the four-yearly cycle of major events, this has huge potential for routine sports coverage.

We have already built a diPloy-equipped control suite in our Dutch facility, and we are working on similar galleries in other major European cities. The object is to provide centralised production, which will deliver huge savings in budget and environmental impact.

Those games could be anywhere. The same director and production team could cover, say, two tier 1 football matches in a single shift: the afternoon game in Manchester; the evening game in Prague. Or a local director could be sitting in front of a production switcher panel in a Czech facility, with the replay server team in Amsterdam and the audio supervisor in London.

This allows us to address the pain points of remote sports production. For example, 3:00 p.m. on a winter Saturday could see multiple football and rugby matches, putting a great strain on the limited number of outside broadcast trucks. Being able to spread the load over multiple centralised production facilities means that not only are the football and rugby covered, resources are still available for hockey and handball.

diPloy gives us a much higher utilisation of the equipment than if it spent more than 50% of its life powered down while a truck pounds up and down the autobahns of Europe. That means sophisticated production facilities are available at a lower cost, allowing broadcasters to offer high-quality coverage for second tier sports and niche events.

We can build more comfortable production areas than can be fitted into a truck, with space for the team to relax between games. Spending more time doing the creative job and less time travelling also contributes to staff satisfaction.

We have an excellent relationship with Imagine Communications on the SNP. It is good to work with a supplier who listens to what we are doing and what we need, and responds positively. We are very much looking forward to the implementation of JPEG XS in SNP, which will allow us to get even more signals down a fibre connection with minimal latency.

SNP is a central part of our diPloy architecture ― essentially the Swiss army knife of production, if you will, with different interchangeable personalities in a compact 1RU chassis; diPloy, we believe, is the future of live sports broadcasting.