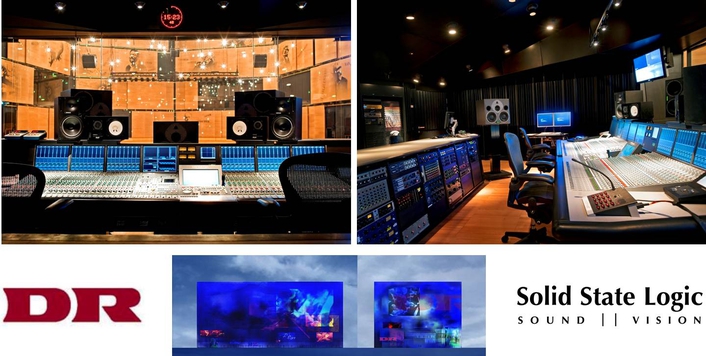 The Danish Broadcasting Corporation (DR), Denmark’s national broadcasting corporation, has just consolidated all its television, radio and media programming into one mega-facility. The newly-built DR Byen complex in Cophenhagen is made up of four buildings spread over 133,000 square meters.

The large format digital audio consoles chosen for DR Byen to provide the power, flexibility and sound quality for multiple uses were Solid State Logic C200 HD Digital Production and the C100 Series Digital Broadcast consoles. DR has a long and successful history with SSL analogue consoles – it has over the years installed more than ten SSL 4000 series consoles for television and radio production, in both fixed studios and OB vans. For this new complex, DR Byen has installed three C100 and eight C200 consoles.

“We were very fortunate to have the tenders from SSL accepted for 11 primary studios,” explains Lund. “Our entire engineering staff is very familiar with the ergonomic layout of an SSL 4000 console, so the transition to the new digital consoles was straightforward. We are using them for live music broadcast and capture onto Pro Tools® and Pyramix DAW systems, television and radio news programming, live talk and interview programmes and radio drama programming.

The successful implementation of the multiple C200 and C100 consoles at the DR Byen complex has met the design expectations for an all-digital workflow in a new mega-facility that brings together a wide range of programming and production styles, covering all aspects of modern broadcasting from traditional television and radio to Internet and mobile devices. The C200 is an ideal console for the music, live-to-air and post production mixing operations needed by the facility, while the different C100 consoles deftly handle news and talk show presentations. As DR Byen is also a cultural and creative centre that plays host to world-class performers, SSL’s pristine audio quality is of primary importance to bring the excitement of live performance presentations to a large home audience.