SSL completing digital audio workflow for the new DR Byen Media Complex
The Danish Broadcasting Corporation (DR), Denmark’s national broadcasting corporation, has just consolidated all its television, radio and media programming into one mega-facility. The newly-built DR Byen complex in Cophenhagen is made up of four buildings spread over 133,000 square meters.

Each of the four DR Byen buildings – referred to by DR Byen as Segments – was designed by a different architect to add visual variety. The indoor street connecting each Segment is replete with cafés, atriums and a gathering space for up to 600 people for events. Segments 1 and 2 contain television and radio production studios, while Segment 3 houses P4 Copenhagen (Københavns Radio) and administration. The spectacular Koncerthuset Copenhagen Concert Hall (Segment 4), which opened in 2009, has four performance spaces, with the main 1,800-seat hall, Studio 1, the new home for the Danish National Symphony Orchestra. The artistically sculpted and inspired acoustic designs of each of the four performance spaces allow for a wide range of live programming to be produced on site. Performances, ranging in size and style from small-scale jazz concerts, chamber music, choral, rock and pop concerts to symphony and national choir concerts, super-star appearances and large-scale rhythmic and big-band concerts, are easily linked via fibre to the appropriate television or radio control room for live broadcast or post production, again helping to streamline all aspects of programming production.

Challenge:
DR Byen originally operated out of two separate main production buildings, one for television and one for radio, and they were over ten kilometres apart. This led to a duplication of services. For example, there were two dedicated news departments – one each for television and radio. Another challenge was the predominance of analogue in these original two buildings. With the international mandate for digital and HD broadcast looming at the time, DR needed to transition facilities into digital workflow. The Danish National Symphony Orchestra was also in need of a new home, so the idea of gathering all aspects of production under one roof was born. A new facility in a single location would mean the broadcaster could aggregate news activities into one department that covered television, radio and new media, and efficiency would improve dramatically. 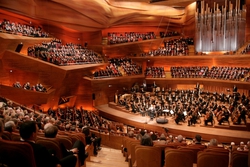 “As a public service provider, DR is obligated to produce a wide range of programming to appeal to every segment of the population,” says Niels Erik Lund, head of production for DR Byen Koncerthuset. “Buildings like Koncerthuset, which can accommodate performances from high-end classical, requiring refined acoustics and highly accurate capture techniques, to hard rock, needing more dampened acoustics and decibel-tolerant microphones and electronics, present a challenge to the audio side of the production facilities. We have also run a fibre link to all 14 control rooms across all four Segments, which means each control room is capable of addressing any performance or studio space, so this was another challenge for audio.”

When adding the rigors of daily live television and radio production, the question became which console manufacturer would be able to supply the audio consoles necessary to handle the multiple tasks presented by DR while still fulfilling the mandate for fully interconnected digital throughput.

Solution:
The large format digital audio consoles chosen for DR Byen to provide the power, flexibility and sound quality for multiple uses were Solid State Logic C200 HD Digital Production and the C100 Series Digital Broadcast consoles. DR has a long and successful history with SSL analogue consoles – it has over the years installed more than ten SSL 4000 series consoles for television and radio production, in both fixed studios and OB vans. For this new complex, DR Byen has installed three C100 and eight C200 consoles.

“We were very fortunate to have the tenders from SSL accepted for 11 primary studios,” explains Lund. “Our entire engineering staff is very familiar with the ergonomic layout of an SSL 4000 console, so the transition to the new digital consoles was straightforward. We are using them for live music broadcast and capture onto Pro Tools® and Pyramix DAW systems, television and radio news programming, live talk and interview programmes and radio drama programming. 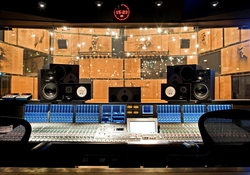 “Transitioning into an all-digital production flow can be a challenging operation. The idea behind DR Byen was to allow us to step into and expand digital production as each Segment was completed. This meant we could keep our production schedules on track while phasing out the old analogue studios. For the audio portion, SSL consoles have made our workflow trouble-free, while delivering excellent results. All the consoles give us the power to mix in 5.1 surround and stereo and we especially like the TotalRecall™ and automation systems that help to streamline setups for different shows and performances allowing our engineers to focus more on fine-tuning presentations.”

Certainly the gem of the complex is Segment 4, the Koncerthuset concert hall facility. Each of the four halls constructed within this building has an associated control room featuring a 48+8-fader C200 console (DSP channels vary from 96 to 128) as the broadcast link for audio. The C200 delivers the necessary headroom and sound quality for the various types of performances, making the audio portions of each broadcast come alive for the home audience across all mediums. 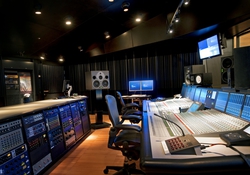 Each of the four Koncerthuset performance spaces is completely different in acoustic approach and size, to accommodate the widest possible uses. Studio 1, the main hall, is designed with theatre-in-the-round, terraced, fixed seating and the acoustics are critically tuned for orchestral performances. Areas of the hall have movable curtains to deaden the acoustics for pop and rock performances. Studio 2 adopts a flexible seating approach for an audience of up to 540 people. Its movable birch acoustic panels are decorated with gigantic etched pictures of famous soloists, conductors, composers and performers. This hall is used for everything from rehearsals for the orchestra and choral performances to rock and pop concerts and special events. Studio 3 is used for performances by the DR Big Band with Studio 4 focused on adjustable acoustics to accommodate the needs of choral and chamber music. Studios 3 and 4 can accommodate up to 170 guests each. While all four performance spaces have a primary use, the variable acoustics and visual styles mean they can also be used for creative, non-mainstream music productions and collaborations with DJs.

“The C200 gives us an ideal platform to capture the excitement of the different types of performances,” states Lund. “We have also interconnected all four control rooms in Segment 4 so that any C200 can address any performance room. For example, Studio 1 is primarily designed for classical performances and the outboard gear in Control 1 reflects that. However, there are times when a major rock band will play in Studio 1, so we will use the Studio 2 control room because it features the outboard gear more suited for a rock performance. We have gone to great lengths to build a live performance facility comfortable for any style of musical production or performance, from world-class artists to youth choirs. The pristine audio quality of the C200 makes this possible.” 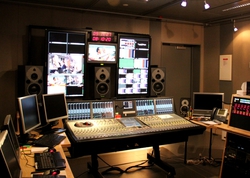 For Segments 1, 2 and 3 the focus is on television and radio production, so they use both SSL C200 and C100 consoles. Studios 5, 6 and 9 A/B have C200s with 64, 48 and 32-faders respectively covering live-to-air and live-to-capture programming. Studios 13 and 14, which are used for news, both have C100 consoles. The Evening Studio features the 32+8 fader C100 HDS console with MORSE Stagebox and is used for special nightly programmes, mostly talk shows and current affairs programming. An additional 48+8 fader, 128 DSP channel C200, in Segment 2 Room LK2121, is dedicated to mixing overflow projects for both radio and television, freeing up the main production rooms for continued programming services.

Bringing the audio together for all four DR Byen Segments is a fibre network with manual fibre patchbays and optical routing system. To maximize signal flexibility beyond the fixed C100 and C200 installations in the various control rooms, DR Byen is using two SSL CSB Stage Boxes built into flight cases with wheels for easy transport to any studio in the entire complex. Collectively the Stage Boxes deliver 96 microphone inputs and 32 outputs, and use MADI over fibre to connect back to any SSL console in the complex. In this way any appropriately equipped studio can address any performance situation, allowing for scheduling efficiency and delivering the capability for any production to enjoy SSL’s superior audio quality.

Evaluation:
The successful implementation of the multiple C200 and C100 consoles at the DR Byen complex has met the design expectations for an all-digital workflow in a new mega-facility that brings together a wide range of programming and production styles, covering all aspects of modern broadcasting from traditional television and radio to Internet and mobile devices. The C200 is an ideal console for the music, live-to-air and post production mixing operations needed by the facility, while the different C100 consoles deftly handle news and talk show presentations. As DR Byen is also a cultural and creative centre that plays host to world-class performers, SSL’s pristine audio quality is of primary importance to bring the excitement of live performance presentations to a large home audience.