2018 marks the 50th anniversary of the founding of Clear-Com, the developer of innovative communication solutions. This anniversary provides an opportunity for us to look back on our incredible heritage of communications breakthroughs.

Clear-Com traces its humble beginning to two people meeting fortuitously in San Francisco in the late 1960s, where the music scene flourished and ear-deafening music became the norm. Bob Cohen and Charlie Butten became prominent contributors to a burgeoning counter-cultural movement which reached its peak in The Summer of Love.  Each contributed in fascinating ways – Charlie was busy fixing and improving the guitar amps that Lindsey Buckingham would destroy in his pre-Fleetwood Mac days, while Bob was mixing sound at The Avalon Ballroom as half owner of Family Dog Productions, alongside the legendary Chet Helms.

The early days at the Avalon were full of great music from the likes of The Grateful Dead, Jefferson Airplane, The Doors and Janis Joplin, with greatly enhanced production values including lights and costumes, and incredibly high noise levels.  This new kind of concert volume levels could (and did in time) cause eardrum damage, not to mention making it near impossible to hear cues and instructions to follow spots and stage personnel. 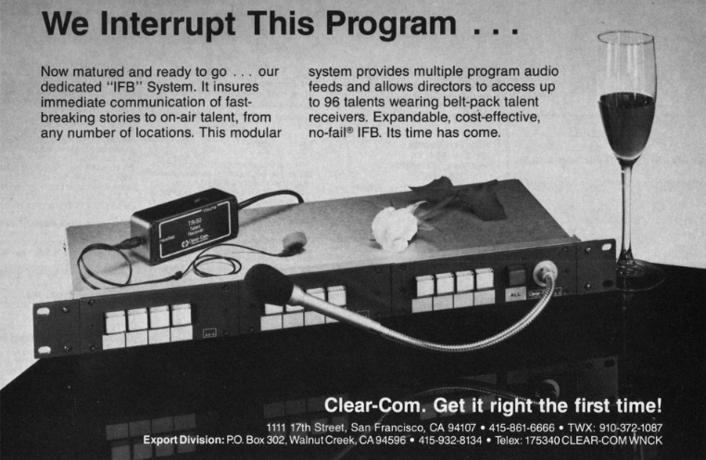 Charlie came to know Bob in this mix of music and high sound pressure level (SPL) through his connection with the San Francisco bands. It was at this moment in history when Bob turned to Charlie with a plea from the bands and his own needs at the Avalon: “We need a better way to communicate.” Until then, Bob and his production staff had been using telephone type headsets for communications, but these couldn’t stand up to the challenging conditions and were useless in high noise settings.

Based on exceptional knowledge of analogue audio technology gained from his work with local bands, Charlie worked with Bob to create the first distributed amplifier intercom system, aka ‘partyline intercom system’ using now familiar ‘beltpacks’ powered by a ‘main station’.

The RS-100 analogue single-channel beltpack was the first product of its kind for live production use: a portable intercom station worn at the hip, carrying audio and power over a shielded microphone cable. It featured non-blocking full-duplex audio signal flow; sidetone so you could hear your own voice alongside other talkers in your headset/speaker; line impedance at 200 Ohm; and a headset jack for users to connect into the beltpack. The system offered a unique contour frequency response and wide dynamic range to ensure ultra-low distortion, known today as the “Clear-Com Sound,” which delivers superb intelligibility in high-noise environments.

It was truly a revolutionary breakthrough in clear communications, which Charlie aptly named “Clear-Com”. Clear-Com was incorporated on April 18, 1968 and moved into its first office in San Francisco, and the RS-100 has become emblematic as the key invention at Clear-Com’s foundation.

Ever since then, Clear-Com has stayed true to its roots with analogue-based intercom systems for the live performance market. However, word spread quickly internationally and into diverse industries – so today Clear-Com also operates in markets including Broadcast, Military, Aerospace and Government, Sports Operations, Houses of Worship, Theme Park and Offshore-Marine.  These market forces drove the company into innovating larger and more flexible systems such as the fully-programmable MS-808 with greater channel count, more separate intercom channels, IFB capabilities, interfacing with third-party equipment such as cameras, telephone lines, and two-way radios.

Eventually, more complex workflows like those in Broadcast required even more flexible platforms and tighter integration with the digital systems that were now in use.  In the early 1980s, Clear-Com introduced its first digital intercom system, Matrix Plus, to address the needs of more demanding television operations, and the first three generations of digital matrix technology were a market favourite.  In 1997 Clear-Com’s success in the market caught the attention of the UK-based holding company, The Vitec Group, which not only acquired Clear-Com but also several other companies serving the Broadcast industry, including Clear-Com’s UK-based competitor, Drake Electronics. The two R&D teams came together to develop what became the Eclipse Digital Matrix, which was released by a now-combined company with the Clear-Com brand in the forefront

Subsequently Clear-Com introduced the Eclipse HX Digital Matrix Platform with a much faster processing speed and expanded capability set. Eclipse HX is unmatched in the industry in terms of integrating with other IP, wireless, digital and analogue Clear-Com-branded intercom families as well as tightly integrating third-party systems using its Host Control Interface (HCI) layer to control those systems. 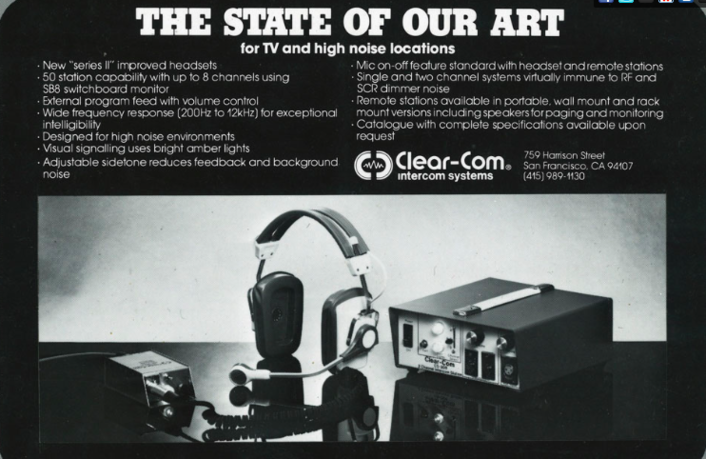 In 2010, Clear-Com launched HelixNet, the very first digital network partyline system. It had a robust set of partyline capabilities and digital audio quality that operated over any standard shielded twisted pair cable, but its core technology was an IP platform which also allowed audio channels, program audio and distributed Power-over-Ethernet to run on any standard IT network infrastructure via an Ethernet/LAN cable.  HelixNet has subsequently risen to the forefront of high-end live performance applications like major Broadway productions and their touring versions. 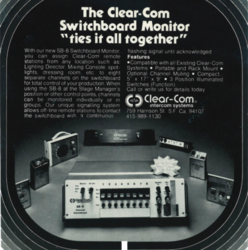 While wired intercom systems were still the central systems used for production intercom, many workflows required a few users to be untethered and mobile throughout production areas. Wireless intercom technology became a necessary adjunct component to the wired intercom.

As early as the 1970s, Clear-Com had seen the obvious opportunities around wireless. Harry Miyahira had founded HM Electronics (HME) in 1974 with a focus on building wireless microphones and quickly identified a parallel opportunity in wireless intercom.  Clear-Com collaborated with HME as well as its competitor, Vega Communications, to offer wireless solutions as part of its intercom offering, and later acquired part of Vega.

For many years, Clear-Com’s wireless intercom portfolio was composed of a number of OEM-provided solutions but the company’s own breakthrough in wireless innovation came in 2002 with the first FreeSpeak/CellCom DECT systems.  FreeSpeak/CellCom was the very first system of its kind capable of supporting a high number of simultaneous wireless full duplex users in a license-free multi-area configuration. The system was available as either an integrated wireless solution with the Eclipse Matrix or standalone system operating on the base station. It was a truly ground-breaking innovation.

In 2014 Clear-Com redesigned the first generation FreeSpeak/CellCom system and introduced the 2.4GHz and 1.9GHz DECT based FreeSpeak II product. This was a significant improvement in terms of RF operation, sound quality and user capability and has come to be recognised by audio professionals around the world as the standard in mid- to- large scale wireless deployments. 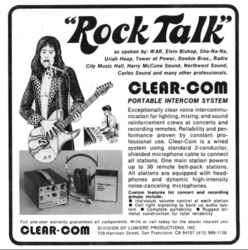 Starting with VoICE in 2005, Clear-Com began to bring production intercom into IP-based operations, allowing users to connect communication paths over commonly available networks or even the public internet.  In 2008, Clear-Com acquired Montreal-based TalkDynamics and leveraged its powerful I.V. Core technology across a range of products, including an updated VoICE2 which simplified intercom panel and audio communications over IP.  From the standalone software-based Concert application, to critical components of the Eclipse HX product range, through to the award-winning LQ connectivity family and Agent-IC mobile application, IP has become an integral part of how Clear-Com’s intercom vision is borne out.  These developments are no longer a specialist activity - they are part of myriad client activities all over the world every day.

The Clear-Com of 2018 is in many ways unrecognisable to the company that started in the crucible of the Summer of Love in San Francisco. Our technology platforms, our global scope, our diverse range of markets and applications are all way beyond the imaginations of Clear-Com’s founders when they began the company in 1968. This anniversary provides an opportunity for a collective expression of appreciation for each other and what we have accomplished together over the years, delivering significant improvements to the way people collaborate in professional settings where real-time communication matters. Notable amongst these developments are those that balance simplicity in user experience with sophistication in network architecture. 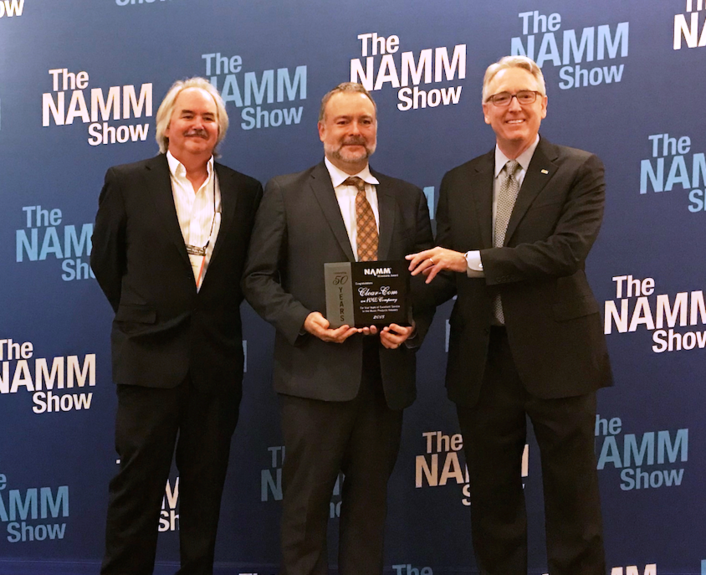 As for the next 50 years, we believe we will still be coordinating communication between people and enabling them to accomplish amazing things – it’s just the ways in which we connect them that are likely to continue to change…

We will be celebrating our anniversary in different ways in various parts of the world throughout 2018 - at tradeshows, in local events with partners and customers, on social media channels, and on our dedicated 50-Year Anniversary website at www.clearcom50.com