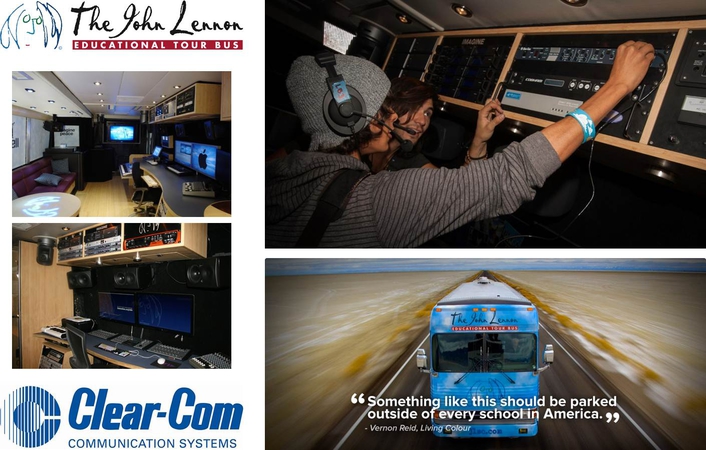 Wireless Intercom Enhances Crew and Student Production Experience
Clear-Com®, a global leader in critical voice communication systems, is sponsoring the John Lennon Educational Tour Bus by supplying the crew with Clear-Com intercoms for its productions and workshops. Clear-Com’s HME DX210 Digital Wireless Intercom enables clear communication and quick collaboration between the staff on diverse productions while on the road. The system is also easy to operate, allowing even students to master the system and gain familiarity with real‐life productions.

The John Lennon Educational Tour Bus is a non-profit, state-of-the-art mobile audio and HD video production facility that travels across the U.S. and Canada, offering songwriting and multimedia production workshops to young people. At each destination, the production setup of the bus changes to accommodate the varying needs, levels of skill and interests of the school and community.

Whether it’s handling communications for an intimate acoustic performance, an onboard video production or a large-scale event where the crew members are separated by considerable distances, the HME DX210 allows the staff to work cohesively and speak to one another as if they were next to each other. It delivers exceptional audio clarity regardless of ambient noise levels and also provides the staff with wireless mobility so that they can freely move throughout the different production spaces to carry out their responsibilities. The audio clarity, full-duplex capability, and wireless flexibility of the HME DX210 have streamlined production workflow for the John Lennon Educational Tour Bus.

“Lennon Bus productions and livestreams are fast-paced.  We can get only one shot or take, so it is critical that we can speak to each other quietly, yet still be heard and understood on the other end,” says Ryan L’Esperance, Producer and Engineer for the John Lennon Educational Tour Bus. “The audio quality of the DX210 is phenomenal. We’re able to hear each other clearly on the system in any environment, whether in the most intimate of settings or in a loud place.” 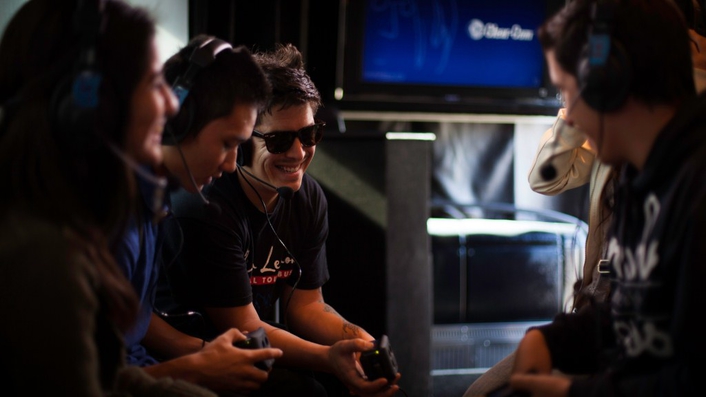 The DX210 base station is installed in the front studio of the bus. The director, video switcher, and possibly the camera operator (if the broadcast is taking place onboard) are all located in this same space, while the audio technician is situated in the middle studio of the bus. For external live broadcasts, the DX210 base station is placed at the front-of-house position. Regardless of setup, the majority of the crew members utilize the BP210 beltpacks in conjunction with the video switcher on the Clear-Com WH210 all-in-one wireless headset. The DX210’s external audio input permits crew members to take the program output of their broadcast and feed it into the intercom so that they can hear the program as well as their cues.

In addition to recording musical performances, the bus’ onboard engineers teach students how to write, perform, record and produce original songs. Students also learn to produce and shoot music videos and documentaries as well as complete a broadcast-quality music video. In addition, they are trained to operate and manage the production equipment, including using the DX210 intercom to communicate with one another, the professional assistant, and producers instructing them.

“Education is a key factor in what we do, and being able to use the intercom to communicate with multiple students at the same time is what makes this whole thing such a success,” L’Esperance continues. “What is really great is including students in the whole process, from setting up the Clear-Com system to maintaining it, such as making sure batteries are charged. Since the DX210 is quite easy to operate, we can simply show the students how it works it and they’re able to quickly dive right in and learn to use it. Clear-Com really has improved communication for our staff and has been an excellent tool for our students to use.”

“Clear-Com is committed to giving back to our community and educating the next generation on live production,” says Judy Cheng, Marketing Director, Clear-Com. “We’re proud to sponsor the John Lennon Educational Tour Bus and to partner with its staff to inspire, train and positively impact students throughout the United States.”

The John Lennon Educational Tour Bus began as an offshoot of the John Lennon Songwriting Contest, which is dedicated to providing opportunities for both professional and amateur songwriters around the world. The bus provides hands-on audio and HD video production experience for students of all ages. Currently in its 16th year of touring, the vehicle’s studios boast the latest audio and video technology, gear and products. The bus conducts free tours and workshops at schools, retailers and festivals, and also tours with headlining artists. It also visits major industry conferences.