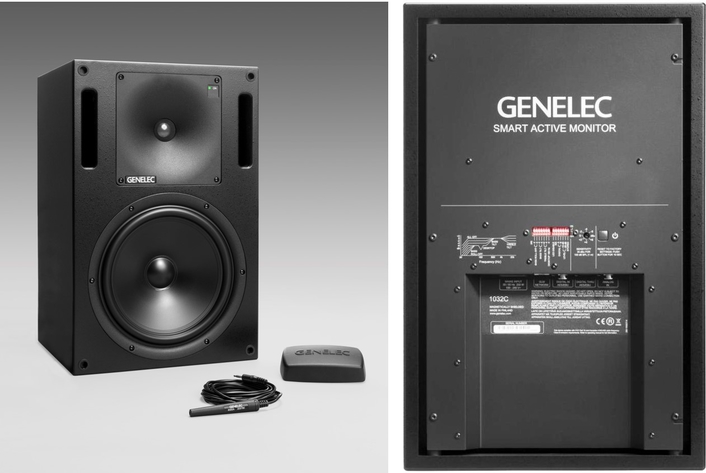 Genelec, the leader in active monitoring technology for four decades, is proud to introduce the 1032C – one of the world’s most popular two-way nearfield monitors (the 1032), now upgraded with the cutting-edge features and flexibility of Smart Active Monitoring™. Offering the wide dynamic range, pristine imaging and on/off axis response for which the Genelec 1000 Series is known, the 1032C adds the world’s most advanced monitor auto-calibration and networking software, plus significant across-the-board improvements including a digital input, higher SPL and increased low frequency extension.

Launched in 1992, the 1032A nearfield was immediately hailed as a milestone entry in the Genelec 1000 Series lineup, offering more audio horsepower, a larger 10-inch woofer and greater directivity than its smaller sibling, the iconic 1031. Now the 1032C fuses a suite of contemporary technologies with the celebrated qualities of the original – including the same drivers, acoustic design and soffit-mountable classic styling. The result is a significantly upgraded monitor built for the most demanding modern music, post-production and broadcast studios, that nevertheless retains the heritage and appeal of both its “A” and “B” version predecessors – a huge sound from a small footprint.

Leading the new additions is the incorporation of Smart Active Monitoring, the ground-breaking Genelec technology and a foundation for the Genelec Loudspeaker Manager (GLM™) software application for PC and Mac. Just as the first 1032 included rear-panel DIP switches to allow users to calibrate their system for their working environment, now the 1032C adds to those switches with the most precise and easy-to-achieve auto-calibration system available today. With the inclusion of this technology, the 1032C takes its place as part of a family of Smart Active Monitors from across the Genelec range, all of which can be used together to create recallable networks – from stereo to huge immersive setups.

Using the GLM app, 1032C owners can quickly and easily optimize the performance of their setup for even the most difficult acoustic environments, compensating for factors such as placement and time of flight anomalies to facilitate the best possible listening experience within their room. As a latest-generation Smart Active Monitoring device, the 1032C also includes Video Delay Compensation, level calibration and input sensing for automatic power saving and wake up, known as Intelligent Signal Sensing (ISS™).

Further refinements have been made to the previous model’s already impressive performance. Custom-designed Class D amplification means a 2.4kg reduction in weight (now 17kg), and a switch mode power supply (with universal voltage), developed in-house by Genelec, brings greater efficiency and savings in power consumption. Compared to the 1032B, the new 1032C has an improved maximum SPL of 114 dB with a frequency response of 40 Hz – 20 kHz. In terms of power, compared to the previous model’s 120W and 180W, the 1032C tweeter and woofer power amplifiers are now respectively rated at 150W and 250W.

“The original 1032 was a much-loved classic both for the high SPL it offered and the finesse that it delivered. Now, by incorporating the latest technologies, the 1032C brings those same advantages into the modern studio environment,” commented Genelec Managing Director Siamäk Naghian. “For those looking for the classic 1000 series Genelec sound and styling, but who want to benefit from the most sophisticated monitoring technologies in the world, the 1032C is the perfect choice.”