Calrec Artemis on a roll with High Rock Mobile Television 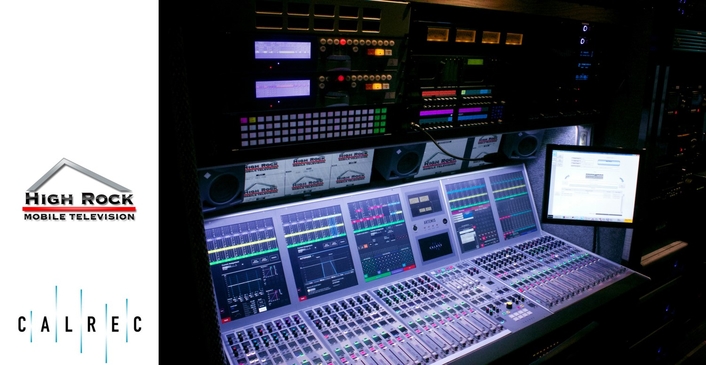 A Calrec Audio Artemis Light is the audio mixing engine aboard High Rock Mobile Television's first-ever production truck, High Rock 1. The 40-foot, dual-expando vehicle is designed to offer big-truck production capabilities in a smaller footprint, with Artemis providing superior sound quality, reliability, and seamless networking via Hydra2. Bennett Engineering sourced the Artemis and provided installation and integration for all systems in High Rock 1, which was manufactured by Gerling and Associates.

"Although we'd never worked with Calrec before, their reputation in the industry precedes them. We spoke to a range of audio engineers, and we got a broad consensus that the Artemis was the best choice for High Rock 1," said Jim Carr, president, High Rock Mobile Television. "Also, we wanted to adopt equipment that everyone — freelancers included — would be familiar with. Calrec desks are really widespread in the mobile broadcasting world, so the Artemis fit the bill.

"So far, the Artemis has more than lived up to our expectations. We have received outstanding support from the Calrec team, and practically any A1 is able to come right on the truck and start using the desk immediately without a learning curve. The ability to save a baseline default setting really reduces the time needed to set up a show, and the different engineers appreciate the ability to save their own profiles. Plus, the console's smaller size makes it ideal in a truck environment where space is at a premium."

High Rock 1 can cover productions up to 12 cameras, designed for all levels of production and with specs similar to a traditional 53-foot production truck. Since the truck's launch in September, the 40 fader Artemis has been used on several high-profile sporting events including horseracing, track and field, and entertainment events.

Carr added, "We tend to cover events that aren't pre-cabled for fibre, or that require transmitting signals over long distances. That's where the Hydra2 system is really valuable — in giving us instant connectivity over fibre with other mobile units on an especially large show, or for getting audio feeds from field locations such as the winner's circle after a horse race or from the infield area of a track event."

"High Rock Mobile Television already has an outstanding reputation for live sports production and counts several major TV networks among its clients. And now, with the launch of High Rock 1, they've taken a consensus and are evolving and growing their business model," said Dave Letson, vice president of sales, Calrec Audio. "High Rock 1 is exactly the type of environment for which we designed the Artemis, and we're excited about our new partnership with the company."