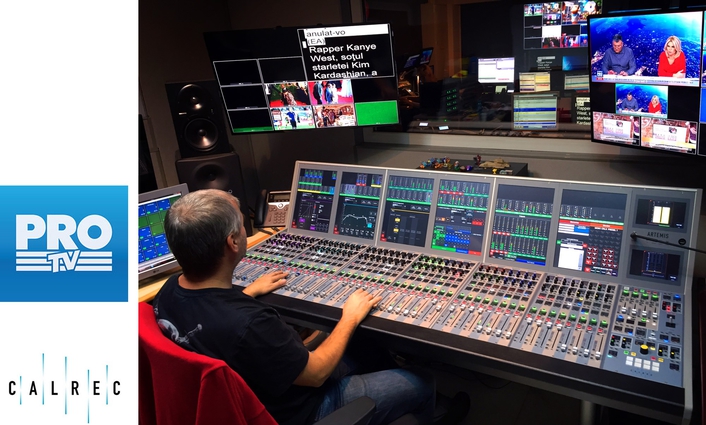 Calrec also counts RDS/RCS, Digisport, and Romanian National Television among its growing installed base in Romania

Pro TV is one of Romania's most popular private TV channels, reaching around 99 percent of the country's viewing population with a broad array of news and entertainment programming. The broadcaster's Pro TV News not only received an International Emmy Award in 2008, but also is considered to be one of the most popular newscasts in Romania.

"For years now, Calrec has been one of our trusted partners. We know we can count on the reliability, ease of use, and high-quality sound output of Calrec audio desks," said Octavian Diac, studios coordinator, Pro TV. "The new Artemis Beam audio consoles are allowing us to achieve new levels of routing and processing capacity for the locally produced shows that represent almost half of our programming lineup."

Based in Bucharest, the Pro TV operation relies on numerous previous-generation Calrec Audio consoles. The 340-channel Artemis Beam replaces a 10-year-old Calrec Sigma console that had been in use in the main studio and will now be reassigned for auxiliary studio use.

"We are pleased to be extending our ongoing partnership with Pro TV, one of Romania's most-watched and highly respected broadcasters," said Michael Reddick, international sales manager, Calrec Audio. "The fact that Pro TV is willing to redeploy its 10-year-old Sigma rather than retire it speaks volumes about the reliability and high quality of our consoles."