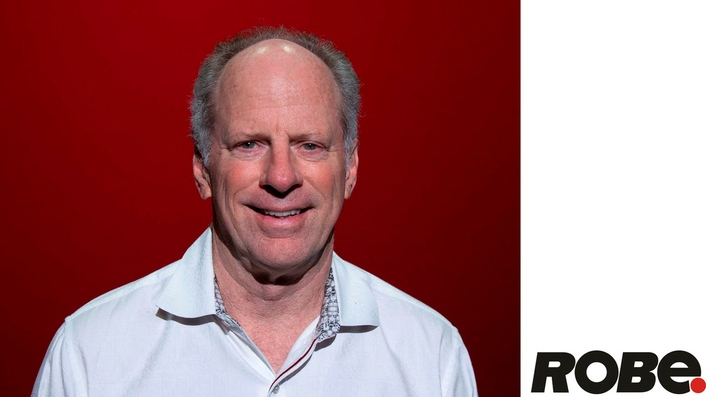 Bob Schacherl, co-CEO of Robe North America, has announced that he will be stepping down from his post on June 30th, 2019.

“After nearly six fabulous years working with one of the most innovative and inspiring moving light manufacturers, which has included amassing a sales ‘dream team’ covering all regions, helping to take the brand to the very top of the entertainment lighting industry … it is time to spend more time with my family and in developing several ongoing projects” he stated.

Bob joined Robe at the end of 2013, just prior to the launch of the BMFL range of powerful high brightness fixtures that have become one of the Czech Republic based brand’s signature products.

His career in what was then an ‘embryonic’ world of moving lights began in the 1980s with Blackstone Audio-Visual also based in Bob’s hometown of Austin, Texas.

This became Blackstone Productions / Lightwave Research and then High End Systems, where Bob worked with some extremely bright individuals and trailblazing industry pioneers. His career continued with a management stint at another maverick contributor in the history of moving light technology, Vari*Lite.

When Bob’s career trajectory was emerging, Robe was just a twinkle in the eyes of its founders!

This had all changed by 2013, when Bob came onboard the management team of the rapidly expanding young company that was enthusiastically driving forward with quality products and a proactive approach. Bob brought caliber, experience, clout and an impressive contacts base to the equation, all of which was instrumental in establishing Robe in the key marketplace of North America.

“Robe North America already had a great team of people, and I was truly humbled by the number of Regional Sales / Business Development managers and others with whom I’d previously worked … who chose to join me and enjoy the spirit and vibe of the Robe journey” commented Bob.

Robe’s CEO Josef Valchar says: “It has been fantastic working with Bob – he has brought a lot of energy and we have all learned and benefitted from his vast knowledge, his great personality and commitment which has been very enriching. We wish him all the best in the future”.

Robe’s Sales Director, Harry von den Stemmen, added: “Bob has really delivered during his time at Robe: He has built and coached an excellent sales team, and with his expertise in intelligent lighting, has helped place Robe firmly on the map in North America. I have known Bob for over 30 years, and we enjoyed many good things together, both business-wise and privately. Not only did he know the global markets and players in our industry, I always valued his opinion and powerful knowledge of connections and mentalities”.

His family hails from Alabama and Georgia. Shortly after the Civil War, his great, great Grandfather, Josiah Beaman, homesteaded 2500 acres of land just outside Austin under the Stephen F. Austin Republic of Texas land grant program. His mother inherited 100+ acres, which in his father’s generation were primarily used for deer hunting.

Bob and his immediate family - wife, son and daughter-in-law plus twin grandchildren - are planning to convert the majority of this ranch into an animal sanctuary and an event space for weddings, retreats, parties, seminars and other celebrations. This will include a series of cabins that will be available as guest rentals and Airbnb properties.