Bluebell Opticom at the NAB2017 Show 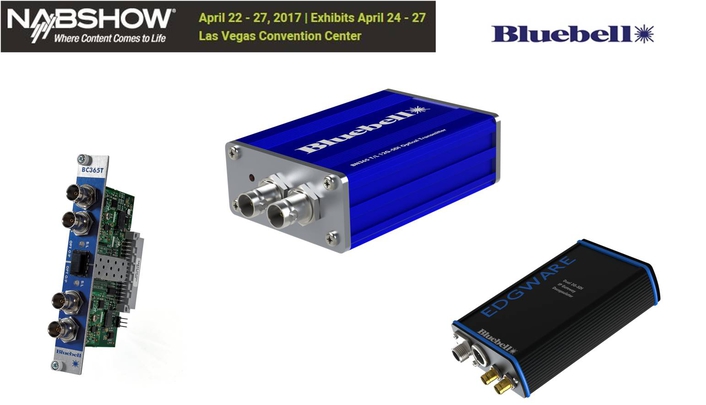 NEW — Edgware
At the 2017 NAB Show, Bluebell Opticom will highlight Edgware, its new range of IP- gateway products that serve as a bridge between current 3G-SDI-based broadcast infrastructures and those built on IP technology. Edgware products make it possible to use BNC and XLR technology to transport broadcast signals over IP networks. The user interface remains the same, but the transport technology is new. The result is that broadcast facilities can save money by repurposing existing equipment for IP delivery.

BCX-760 Series 10G Ethernet Point-to-Point Fibre Link
2017 NAB Show visitors will see Bluebell Opticom's BCX-760 Series 10G Ethernet point-to-point fibre link, which is now in full production. The BCX-760 is a camera-back interface that allows easy connection and signal transport between a camera and an outside broadcast truck or a base station. A compact and powerful interface that slots neatly between the camera body and the battery, the BCX-760 is designed to convert a basic camcorder into a rackable professional camera channel. In a first for the industry, BCX-760 interfaces map all signals presented at the back of any broadcast camera onto a 10G Ethernet point-to-point link, ensuring safe, robust, interference-immune, and high-quality transport over much longer distances than have been possible before. 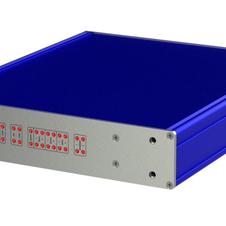 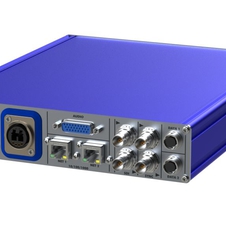 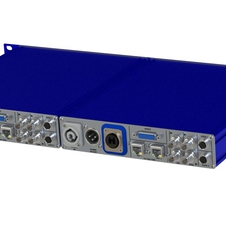 One-Cable 12G-SDI Connectivity for 4K Broadcast Applications
12G-SDI or 4K UHD TV is commonplace today, so many productions are now shot in 4K even if they don't get broadcast in that format. Bluebell Opticom has created a suite of fibre- optic transport products that provides a single coax or fibre connection to a 12-Gbps SDI video interface for 4K/UHD applications.

Making its first appearance at the 2017 NAB Show will be the BC390, a mux/demux card designed to associate UHD with multiple SDI signals. The BC390 receives four 3G-SDI inputs and serialises them to one 12G-SDI output on both BNC and fibre ports simultaneously, or vice versa. This is the first of a range of modules that will up/down/cross-convert HD-SDI, 3G-SDI, 6G-SDI, and 12G-SDI. The BC390 and its stand-alone counterpart, the BN390, were created for the 12G market, but they can be implemented in multiple ways for multiple applications. For example, if an HD or 3G-SDI CWDM network is running out of wavelengths, the BN390 can put four 3G-SDI signals onto one wavelength, thereby quadrupling the payload for very little extra cost.
Also on display will be the BC365, a set of modular cards from Bluebell's straight 12G-SDI-to-fibre converter range. Designed for Bluebell's BC Series 19-inch rack-based system, the BC365 cards provide a dual-channel 12G-SDI link over single-mode fibre. The BC365T converts electrical 12G signals to fibre, while the BC365R converts fibre signals to 12G electrical.

Company Overview: Bluebell Opticom designs and manufactures high-quality fibre optic links for the broadcast, telecommunications, and professional AV industries. Its products are used for the critical delivery of video, audio, and data services at live world-class sporting events and venues requiring the transport of high-bandwidth signals over long distances. Applications range from robust stand-alone links to complex fixed installations over fibre backbones.
With products in use worldwide, Bluebell Opticom counts many of the top blue-chip companies and networks among its clients. The company serves customers directly and through a select global network of partners and distributors.