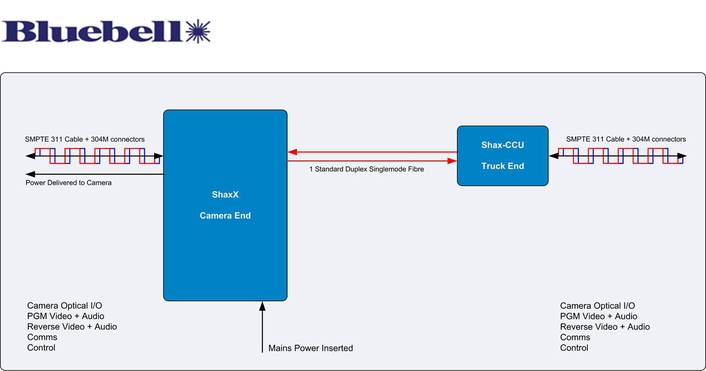 With Power Insertion for Broadcast Cameras
Bluebell Opticom Ltd., provider of innovative fibre-optic solutions for fixed and remote applications, today announced the ShaxX, a rugged system designed to provide full bi-directional signalling and power for broadcast cameras fitted with standard SMPTE 304M hybrid connectors. The ShaxX allows outside broadcast and remote production crews to forgo SMPTE hybrid cables and take advantage of preinstalled fibre networks on location in order to cut rigging time and position cameras freely wherever they are needed, regardless of distance or the location of mains power sources.

"In production scenarios that require the camera operator to work far away from the CCU, SMPTE hybrid cables are often impractical. So there is great demand for getting power to the camera without using SMPTE hybrid cables. The ShaxX meets that demand," said Paul McCann, Bluebell Opticom, managing director. "By taking power out of the hands of the CCU and inserting it on the camera end, the ShaxX eliminates the need to transfer power all the way from the CCU to the camera, leaving only the transmission of signals back and forth on lightweight single-mode optical fibre that's reliable and easy to rig. The ShaxX complements our standard Shax devices and, when paired with our modular fibre interface cards, can offer resilient signal transport and management of complete camera chains."

The ShaxX works with Bluebell's Shax hybrid alternative interface to provide power to the camera without having to transport it from a remote CCU, thereby removing the expense and effort of rigging SMPTE hybrid cables. Instead, users simply connect the ShaxX unit to the camera with a SMPTE hybrid jumper cable. The ShaxX unit, which is connected to mains power on the camera end, powers the camera. At the same time, the ShaxX is also connected to two strands of single-mode fibre in order to carry signals from the camera to the CCU and vice versa. The Shax unit on the CCU end receives those fibres, and is then connected to the CCU via a SMPTE hybrid jumper cable. When used in combination with Bluebell's BC series modular fibre interface cards, the ShaxX can multiplex multiple camera links over a single fibre.

The ShaxX overcomes the challenges of using SMPTE hybrid cables, which are expensive, heavy, and can be sensitive to lightning or other grounding variables. By replacing the SMPTE hybrid cable with plain fibre between the CCU and the camera, especially in instances such as on a ski slope or a golf course where the distance between the camera and OB vans is great, the ShaxX gives the production team the freedom to position cameras for the best shot/angle rather than being restricted by the location of mains power. At the same time, it reduces rigging time and allows crews to tap into existing fibre networks in stadiums, arenas, concert halls, and other venues.

The ShaxX is enclosed in a robust and ruggedised aluminium case, making it ideal for outside broadcast and fly-away applications. LEDs on the front panel give operators instant feedback on the status of the link between camera and CCU.

About Bluebell Opticom Limited
Bluebell Opticom designs and manufactures high-quality fibre optic links for the broadcast, telecommunications, and satellite industries. Its products are used for the critical delivery of video, audio, and data services at live world-class sporting events and other situations requiring the transport of high-bandwidth signals over long distances. Applications range from robust outside broadcast links to complex fixed installations over fibre backbones.With products in use the world over, Bluebell Opticom counts many of the top OB providers and networks among its clients. The company serves customers directly and through a select global network of partners and distributors.