Baggpipe pipes up in praise of Genelec 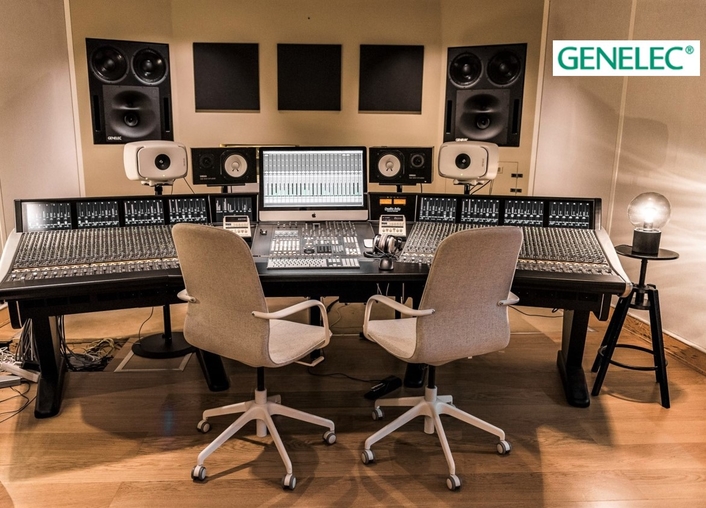 In both Studios 1 and 2, these main monitors are augmented by pairs of 8341A point source nearfield monitors from The Ones family

Located in the Johanneshov district of Stockholm, the site now occupied by Baggpipe can lay claim to a hugely significant and varied musical history. Previously the home of the world-famous Abbey Road/EMI Studios, the site has also hosted sessions by artists including ABBA, Britney Spears, Lady Gaga and producer Mutt Lange, to name just a few. Now that tradition of working with artists both established and emerging is continuing under the auspices of Baggpipe and a team consisting of amongst others legendary music producer Anders Bagge, music executive Craig Logan (LME) and CEO Alvora Larsdotter.

A winning fusion of modern and vintage technology, the current Baggpipe Studios complex comprises two main commercial studios and seven smaller, songwriter/producer studios. From the installation of new hardwood floors to the choice of SSL Duality consoles, Baggpipe has been through several significant upgrades in recent years, but until the recent addition of Genelec active monitoring, the inconsistency of the facility’s monitoring remained a cause of concern.

Willem Bleeker is Studio Manager and Engineer/Mixer at Baggpipe, and had found that although he was fond of some of the previous monitors “they had always been an issue with clients, who often said that they weren’t happy with the sonic image. The sound was either ‘too sharp’ or had ‘too much bass’… it never seemed to be quite right.”

Studio 2 was already home to a pair of Genelec 1037B monitors, and although Bleeker only occasionally found himself working in the room, he quickly noticed that “people really liked them; they sounded the way that people wanted speakers to sound.” It was when Patrick Lundin, Genelec Sales Manager for Pro Audio Sweden, organised an on-site showcase for The Ones three-way coaxial monitors that Bleeker found himself convinced.

“It was love at first hearing,” he recalls. “After borrowing them for a while I didn’t want to give them back. It wasn’t long before Patrick and I started talking about something more permanent. He showed me the mighty pair of 1234A SAM studio monitors that he thought would be perfect for the main control room of Studio 1, and the 1238DF SAM monitors he felt would best suit Studio 2.”

In both Studios 1 and 2, these main monitors are augmented by pairs of 8341A point source nearfield monitors from The Ones family, all finished in pristine white with accompanying 7370A subwoofers. Meanwhile, the facility’s seven production rooms each now feature a pair of 8340A two-way SAM monitors, with two of the rooms also boasting 7360A subwoofers. Finally, a multi-purpose meeting and conference space has been fitted with a pair of 8331As from The Ones range, once again finished in white.

According to Bleeker, the use of GLM auto-calibration and smart monitor management software offered not just quick and easy calibration of the monitors within the facility’s many rooms, but the potential to rapidly adjust each room’s monitoring set-up to suit the task at hand. The monitors have already lent themselves to sessions ranging from 26- piece orchestras to boybands and emerging solo artists.

“It doesn’t matter what you are working on, they always do the job,” Bleeker enthuses. “There are some other monitors out there that almost feel as if they are specialised for one thing only. But with Genelec, the monitors deliver exactly what you put into them and everybody understands them. You can also work with them for a very long time without your ears getting tired – a really important consideration for those long sessions!”

He concludes: “Last but not least, you might not be able to hear design but it is definitely a big factor in studios, and make no mistake, the Genelec monitors look badass!”

SAM (Smart Active Monitoring) technology has been developed and refined by Genelec for more than a decade to allow studio monitors to be networked, configured and calibrated for the user’s specific acoustic environment. Each SAM monitor or subwoofer is equipped with advanced internal DSP circuitry, which tightly integrates with the GLM (Genelec Loudspeaker Manager) software application, running on Mac or PC. GLM’s reference microphone kit allows the user’s acoustic environment to be analysed, after which GLM’s AutoCal feature optimises each SAM monitor for level, distance delay, subwoofer crossover phase and room response equalisation, with the option of further fine tuning by the user. By minimising the room’s influence on the sound, SAM monitors deliver an unrivalled reference, with excellent translation between rooms

Since 1978, Genelec has dedicated itself to helping customers fulfil their dreams by offering them the most truthful sound reproduction possible. Since then the company has developed the highest quality studio monitors and active loudspeaker systems, becoming recognised as the global leader in the innovation and development of technologies for highly demanding professional audio monitoring. Genelec’s ongoing philosophy is not just to be the best but to always seek to become even better. Accordingly, the Genelec R&D team’s technical ambition has led to countless innovations and revolutionary designs, setting benchmarks and helping to define the path of our industry. Developing and maintaining a wide product offering has also given Genelec an exceptional opportunity to support various professional audio monitoring applications and ultimately gather tremendous experience. Every Genelec customer benefits from this experience by having precision audio monitoring tools to rely on even in challenging conditions.

Genelec products are designed for demanding professional, premium AV installation and home use. They reveal the original nuances of the sound, without leaving anything out nor adding anything to the signal in any stage of the production. Genelec products are made to last, with pride and care by our own highly committed and experienced production team, based in Finland. Even our very first products are still in active use and we continue our strong commitment to provide service and spare parts for all products for years even after their discontinuation.