Audiolux is one of the first Italian rental companies to stock up with a large number of Axcor Profile 600s. Claypaky has recently launched this LED spot profiler on the market and it has been an immediate great success among industry professionals and workers.

The Lodi-based company has purchased 100 standard version Axcor Profile 600 units, in order to add a successful reliable light to their stock for use in the numerous shows and theatrical, musical and television events it is involved in.

Ettore dell'Orti, owner of Audiolux, told us that a lot of thought went into choosing the Axcor Profile 600. He analysed and discussed it with his employees right down to the last detail. "We set up our showroom with all the most competitive models on the medium-high power LED spotlight market. After that, we invited the biggest names in Italian lighting design in the theatre, television and concert businesses to drop in over the course of two weeks, including Marco Filibeck, Aldo Solbiati, Ivan Pierri, Franco Fratus, Valerio Tiberi, Massimo Pascucci, Daniele Savi, Franco Busi, Marco De Nardi, Marco Piva, Steve Gray and many others."

"We did some very in-depth testing with each of these professionals and compared all the models offered by the various manufacturers. In the end, figures in hand, we chose the ones that turned out to provide the best compromise between performance, light quality, reliability and value for money. The Axcor Profile 600s scored very high values in all parameters. They did not really show any weaknesses at all.

The light source the Axcor Profile 600 fits is based on a 500W white LED engine. The wide zoom range from 5.3° to 47.2° (1:9 ratio) means the light can be used in a versatile way in every situation, including those for which a narrow angle is best. Its luminous efficiency is one of the highest recorded among lights in the same power category, and if necessary it can be boosted by about 25% thanks to boost mode. This also makes the Axcor Profile 600 an excellent unit for touring. 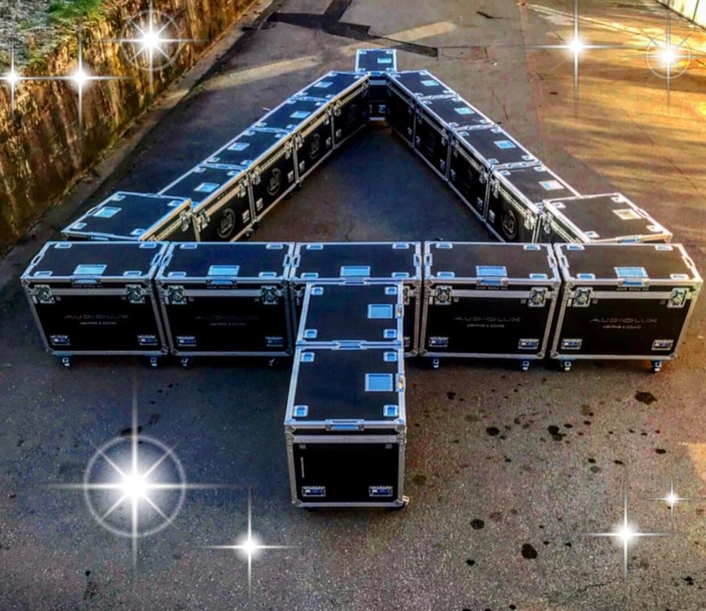 The completeness of its colour section, the possibility of using it as a wash light, its great wealth of visual effects, its award-winning, patented Claypaky framing system, implemented with technological devices that enhance its precision and versatility, all make the Axcor Profile 600 an essential benchmark for every modern entertainment use.

Audiolux recently supplied twenty-four of the new Axcor Profile 600s to the Maggio Musicale Fiorentino. They were used in the musical West Side Story, produced by Federico Bellone. Valerio Tiberi, the lighting director, told us: "I am very satisfied with the overall performance of the Axcor Profile 600s. The contrast between light and dark prevailed at the end of the First Act thanks to the position of the units, and the angles, but above all thanks to the power of the white light from the Profile 600s, which proved to be a successful fundamental feature."

Other Axcor Profile 600s are currently on tour with Audiolux in Roberto Bolle's extraordinary show. Yet more will soon be supplied to the Teatro alla Scala in Milan to illuminate the 2018/2019 theatre season. Audiolux's flexible organization can satisfy any request, from large prestigious theatrical events and musical tours to small local events.

Ettore dell'Orti, owner of the company, said: "Our idea when we founded Audiolux was to base our company on the wealth of knowledge we had gained in the entertainment sector. We follow television and theatre productions, trade fairs, concerts, conventions and parties, and pay great attention to every stage of design, technical implementation and assistance with specialized technicians and advanced equipment. We work hard, and only make big purchases if we are 100% convinced that we are getting the best product on the market."

Claypaky’s multifunctional Mythos 2 delivers for Nothing But Thieves
Claypaky’s Scenius Fixture Range Hits the Road with Katy Perry for “Witness: The Tour”
Claypaky’s SharBar has Russian debut with My Michelle