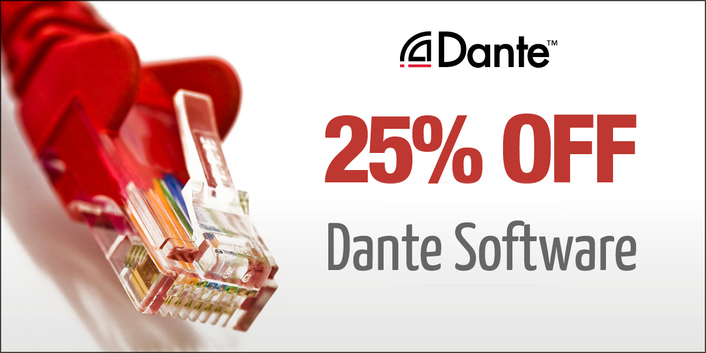 Audinate, creator of Dante, the industry-leading audio networking solution, announces a limited-time, 25% off promotion for Dante software.  The “InfoComm Special” runs through June 15th and applies to permanent licenses of Dante Via and Dante Virtual Soundcard.

Dante Via is affordable audio software that networks your computer's audio applications and devices. It allows you to network USB, Firewire and Thunderbolt devices and audio applications, monitor channels on a Dante network, and connect computers together in an instant Dante audio network. Dante Via normally sells for $49.95, but during the promotion customers can save over $12.

Dante Virtual Soundcard is audio networking software that turns your computer into a Dante-powered workstation. It is a robust, high-channel-count application with the single purpose of getting a large number of channels in and out of a computer, seamlessly integrating your PC or Mac with Dante audio devices on your network.  Dante Virtual Soundcard normally sells for $29.99, and will be discounted by more than $7 during the promotion.

To learn more about these revolutionary software applications and to take advantage of the promotion, visit www.audinate.com/25off.

ABOUT AUDINATE: Dante is Digital Media Networking Perfected.
Audinate was founded with a vision to revolutionize professional and commercial audio for the 21st century. Audinate’s award winning Dante audio-over-IP networking solution is the worldwide leader and used extensively in the professional live sound, commercial installation, broadcast, public address, and recording industries.  Dante replaces traditional analogue audio cables by transmitting perfectly synchronized audio signals across large distances, to multiple locations at once, using nothing more than an Ethernet cable. Audinate is headquartered in Australia and has regional offices in the United States, United Kingdom and Hong Kong. Dante technology powers products available from hundreds of leading audio partners around the world.