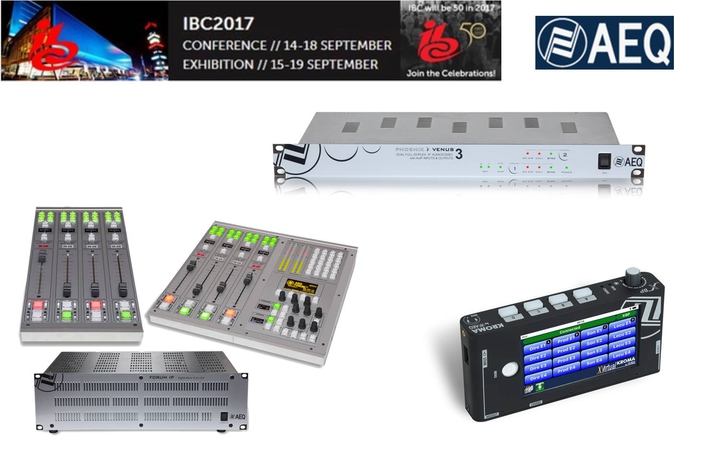 Several new audio and IP-based communication products from AEQ are presented, as well as new broadcast monitors with the “KROMA by AEQ” brand name.

OLYMPIA 3 COMMENTARY SYSTEM
AEQ is probably the company that accumulates more references than any other company for its involvement as an equipment supplier for the broadcasting of large international sporting events. The accumulated experience spans more than 30 years.

As a result of all this experience, we present our 3rd generation Commentary Unit at the 2017 IBC Show.

The CU, Commentary Unit, is technically the device used to generate and send the Unilateral Audio Signals (commentary) from the event venue to a radio or television broadcaster.

The design and functionality of the OLYMPIA 3 is really impressive:
The unit can operate in three different ways: as a standalone unit (audio mixer), simply connected to a control PC; as a part of an AoIP intercom system operating on a multi-channel audio network (the unit is DanteTM native but is also AES67 compatible) at the same time being an intercom panel for coordination or; forming part of a large scale commentary system.

Each unit features 3 x Gb Ethernet ports. One of them allows for PoE supply while the other two allow for daisy chain connection and have auxiliary output for video and data transport. It can also operate as a standalone audio mixer that may be configured as mono or stereo, with routing, tone adjustments and dynamics control.
It allows for the connection of up to three microphones (one of these can be set to work as the order microphone when operating as an intercom panel whenever required) and two line inputs. The design is a splash-proof construction and allows for outdoor operation under direct sunlight. It can also be configured with reduced brightness for operation in darker and indoor areas. 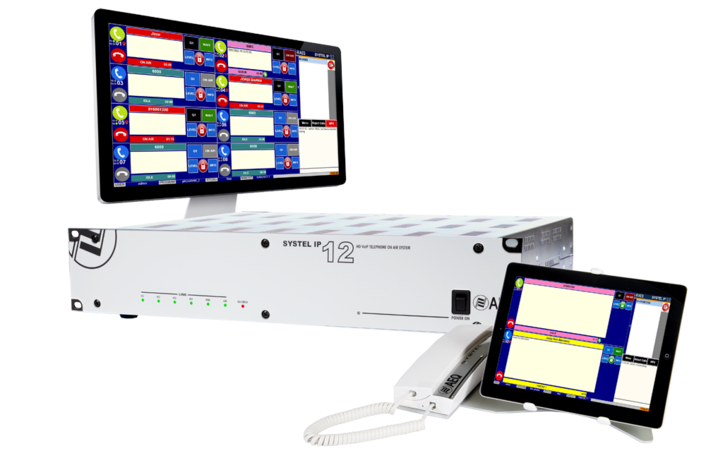 AoIP connectivity. AEQ provides the widest range of native DANTETM AoIP networked audio devices for broadcast use: Mixing consoles for ON-AIR and production, Matrix and Routing Systems, Broadcast Automation Playout Workstations, AudioCodecs for program contribution and a wide range of audio input/output interface devices. OLYMPIA 3 can be connected to all of them via AoIP. Further, if using the native DANTETM mode, OLYMPIA 3 can communicate with over 700 devices from third-party manufacturers. AES67 mode further guarantees the interconnectivity with any system or device that is compatible with the AES standard. 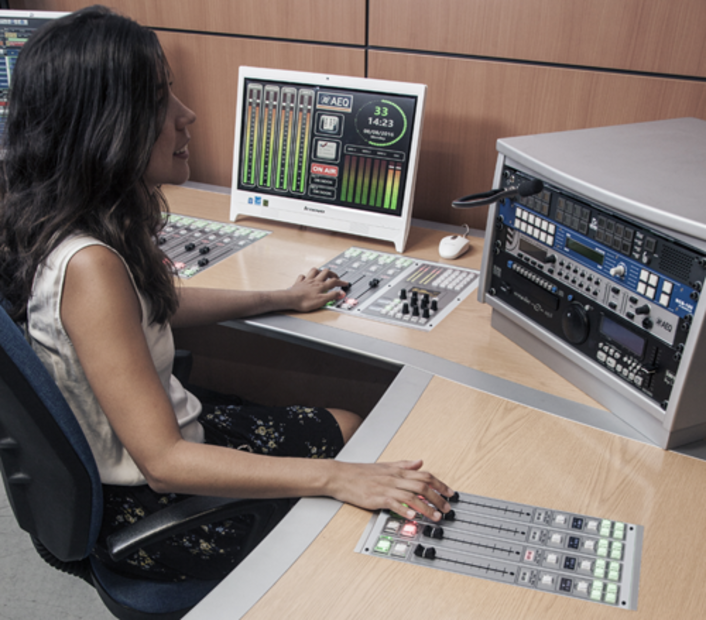 FORUM IP SPLIT DIGITAL AUDIO MIXING CONSOLE
Customers’ request for greater flexibility has driven us to develop the new SPLIT version of AEQ FORUM IP mixing console. Now, this product is available with a version where the control surface is separate from the Engine or Core. Further, the control surface has been split into modules that can be installed individually. Interconnection between the modules and to the engine is made with standard CAT5 wiring using RJ45 connectors. They are also very easy and convenient to integrate or embed in the studio furniture. 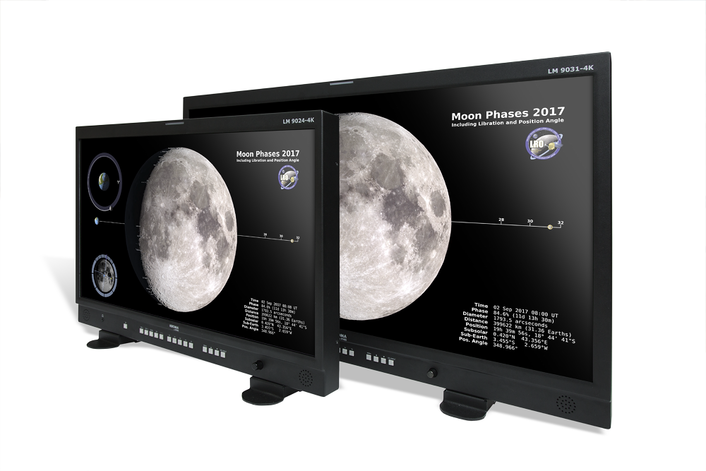 From a configuration and operation point of view, FORUM IP SPLIT is no different from the original, self contained version. However, this new one version supports larger configurations with up to 24 fader channels. The setup and configuration application is still the easiest to use available on the market. The popular SW options, such as VIRTUAL FORUM and FORUM SCREEN, are of course compatible with this new version. 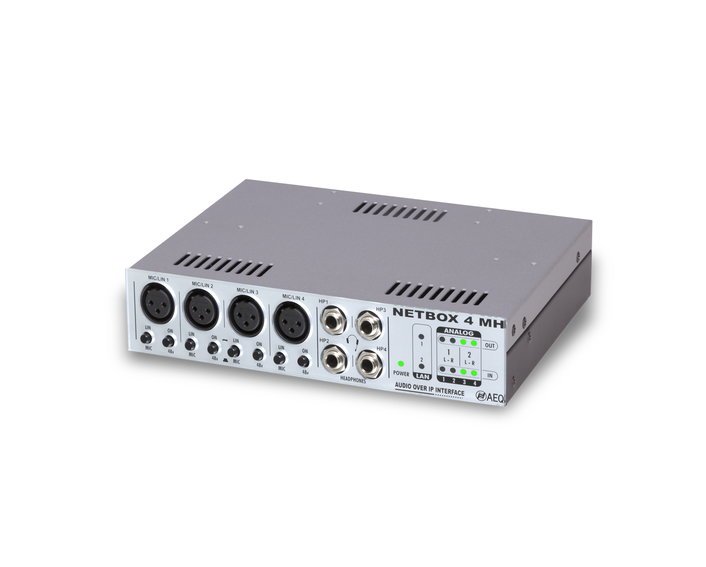 SERIES 8000 & 9000 BROADCAST MONITORS
Last year we presented the Series 8000 Broadcast Monitors with the KROMA by AEQ brand. These monitors are available in sizes of 9”, 18” and 24”, with 1920 x 1080 Full HD resolution, making them ideal for reference and signal monitoring in TV / Video production centers. They feature 10bit processing, greatly improving the representation of gray scales, interlacing, color depth and monitor linearity. The increase in the number of colors that can be displayed when passing from 8 to 10 bits for each red, green and blue channels is very significant. 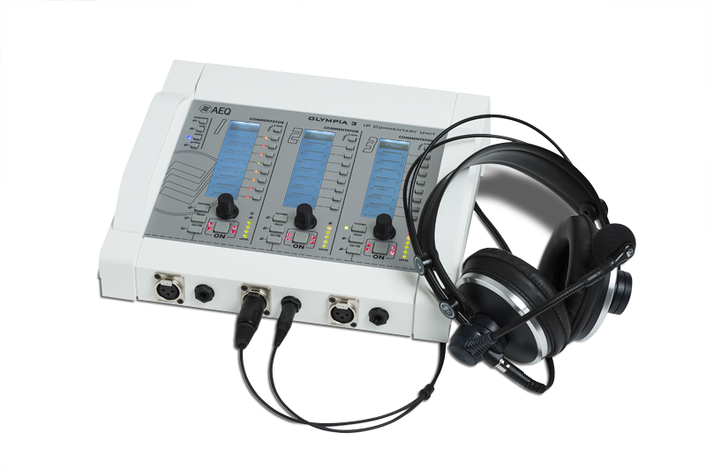 This is the first audiocodec in the world that incorporates AoIP multichannel networking connectivity using DANTE™ protocol and making it available at any location within your installations. Includes “Carrier Grade” features such as double IP port, double power supply with 48VDC option, dual serial ports, centralized remote device control and SNMP. 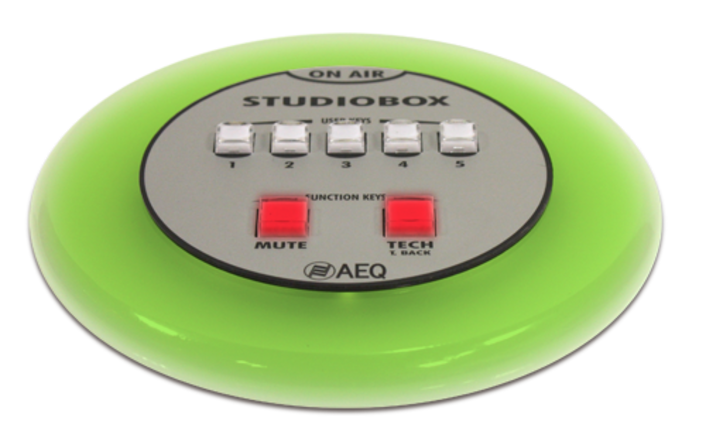 This unit covers the need for Microphone inputs and headphone outputs for example, radio and TV studios, stage or multimedia installations. The multichannel IP connectivity (Audinate DANTE™ protocol) makes the Inputs of the unit available at any point of the network.

As a complementary feature, the unit is sporting the same inputs and outputs as analogue balanced line Inputs and Outputs. Whenever used is in a Studio environment the 4 GPIO’s via IP for signaling comes really handy, especially when paired to the Studiobox control box.

XPLORER wireless intercom system represents a step forward in the KROMA by AEQ range of intercom devices. As many Xbp beltpacks as required can be installed. They are small and feature a tactile screen. Also, Xplorer virtual beltpacks can be used. These are apps running on Windows or iOS based devices. The system allows the user to create work areas, superimpose them and manage seamless transitions between them with excellent audio quality. XPLORER intercom system may operate autonomously and is also available for CONEXIA, CrossNet and TH5000 intercom matrixes.

A new, optimized version of the third-generation AEQ multiconference system is presented. It is also based on a digital matrix and uses IP-only lines, with flexible and dynamic improved control, that mixes  call queues and multiplex console formats for greater user convenience. It admits control by third-party applications and is completely integrated in the applications created by the popular developer Neogroupe.

OTHER PRODUCTS DISPLAYED:
You will be able to see, among others, these fine products at AEQ stand:
⦁ Portable and rack-mounted Phoenix Audiocodecs: Alio, Stratos, Mercury.
⦁ Digital audio matrixes with AoIP DanteTM / AES 67 interfaces: BC 2000 D and Netbox 8 & Netbox 32 AoIP interfaces.
⦁ Digital audio mixing consoles AEQ ARENA, AEQ FORUM-IP and AEQ CAPITOL-IP with AoIP multichannel connectivity and tactile screen for control and monitoring.
⦁ AudioPLUS playout automation systems for broadcast. Now featuring direct inputs and outputs to / from the PC to Dante based AoIP networks.
Also, these and other KROMA by AEQ products will be displayed:
⦁ Digital intercom system, from 16 x 16 crosspoints to large systems with more than 1000 x 1000 crosspoints with IP wiring, DanteTM Protocol as ConeXia and CrossNet, including a wide range of audio-processing user panels.
⦁ A really complete range of broadcast monitors (TFT) in sizes from 4 to 46”. Several series, suitable for different applications and environments, are available.
⦁ Multi-viewer video processors Kview 8, etc.

About AEQ-KROMA:
AEQ-KROMA have been developing, manufacturing and commercializing equipment, automation and production systems for radio, television and multimedia, for 37 years. With its commitment to offer the broadcast market high quality products and services, the company offers professional audio and video products with innovative and strong engineering designs, at very competitive prices.

AEQ and its brand name KROMA, have served an array of customers world-wide with its advanced audio technology, broadcast monitors, intercom systems, communications expertise, audio storage applications and automation of multimedia production and broadcasting. Moreover, AEQ has been present at the major international sporting events such as the Vancouver 2010 and Sochi 2014 Winter and the London 2012 and Rio 2016 Summer Olympics and was instrumental in providing the audio signal to a world-wide audience during the broadcast of those events.

As a prominent broadcast equipment manufacturer, AEQ dedicates 25% of its human resources to R&D. This strong commitment to cutting edge technology has resulted in the introduction of new products every year for the last 20 years. AEQ is headquartered in Madrid, Spain, with offices in Mexico and the USA since 1993.