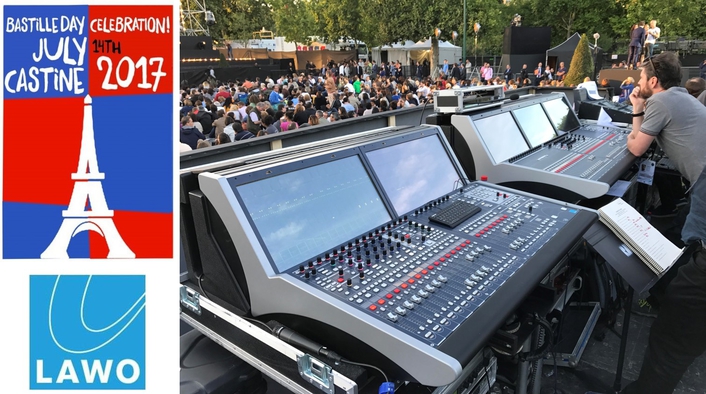 In the third successive year, Lawo once again in 2017 provided IP-networked audio consoles for the 14th July celebrations in Paris. More than 500,000 spectators celebrated at the foot of the Eiffel Tower in Paris “Bastille Day”, the National Holiday in France, marking the beginning of the modern French nation. The “Concert de Paris” is one of the largest classical music events in the world, followed by the traditional fireworks. The music featuring the National Symphony Orchestra and the Choir of Radio France with internationally renowned soloists was relayed to TV viewers and radio listeners in France and beyond.

Two Lawo mc²36 were used for FOH mixing, one handling the orchestra, and the other the choirs and opera singers, and another mc²36 was taking care of the monitor mix. An mc² 66 in the OB truck was used for the live broadcast of the event on France 2 and France Inter, the main public TV and radio stations in France.

A Nova37 router connected mixing consoles and I/O systems through a RAVENNA/AES67 network, providing up to 1 536 x 1 536 crosspoints. Its plug-and-play operation means that an audio network is operational in moments – and running silently, thanks to noiseless cooling fans. Network user rights are managed directly from the console’s touchscreen using Lawo’s one-touch rights management system. Standard network presets are immediately available, but the router configuration can be tailored to a specific installation’s requirements.

“A 24-fader mc²36 was set up for mixing the choirs and opera singers and there was a 40-fader desk for the orchestra. Another 40-fader mc²36 was used for monitoring. All Lawo consoles and DALLIS I/O, and the audio recorders were connected to our plug-and-play Nova37 router,” explains Hervé de Caro, Lawo’s Live Sound Specialist. “The mc²36 features a very intuitive configuration page for setting up and managing the rights within the network, controlling the preamps and feeding the different outputs and recorders.”

The RAVENNA-based ‘all-in-one’ mc²36 mixing console also proved its flexibility at the Bastille Day celebration, meeting all of the demands of broadcast and live duties, alongside its reliability, high audio quality, and high channel capacity.

Having begun with the traditional military parade on the nearby Champs-Elysees, the day closed with the firework display and accompanying music – watched and heard across the nation, thanks to Lawo and the Radio France team. “The show was flawless and it’s been a new occasion to demonstrate the relevance of our solutions for such large-scale events” says Joffrey Heyraud, Lawo’s Sales Director for France.