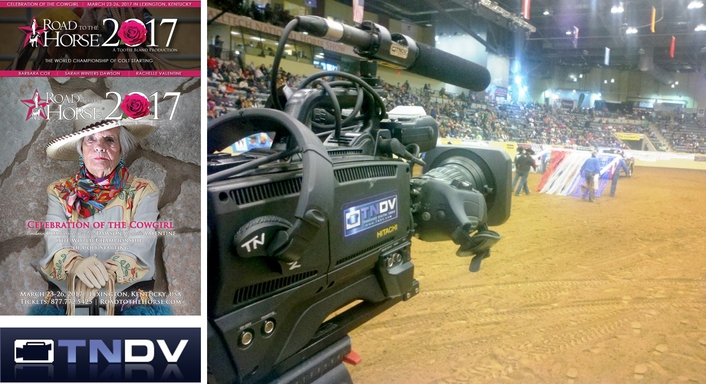 The event, streamed live and produced for DVD, also marked the tenth anniversary of the technical production partnership between TNDV and Road to the Horse

Known as the world’s premiere colt starting competition, the Road to the Horse (RTTH) 2017—which was held this spring at Horse Park’s Alltech Arena in Lexington, KY—featured a “Celebration of the Cowgirl,” as talented female clinicians competed to tame, saddle and ride a wild colt in record time. The annual three-day event drew thousands of horse-loving spectators, as well as a global online audience that watched the live webcast on Road to the Horse TV.

With all the action and excitement of a rodeo or high stakes horse race, Road to the Horse competitions begin with a remuda (or herd) of untamed young colts entering the arena and running in circles. When these three-year-old American Quarter Horses arrive—from the 6666 Ranch (said Four-Sixes Ranch) in Texas—they’ve never been saddled up or touched by human hands. In a very short period of time, the clinicians must compete to tame one of the wild horses, get it saddled and ride it through an obstacle course to win points. This year’s competition was particularly newsworthy because it featured all female clinicians or cowgirls who competed throughout the event.

The technical production this year leveraged a full complement of HD production gear, using Hitachi Z-HD5000 cameras to capture the excitement; and, according to TNDV President and Owner Nic Dugger, the most extensive audio infrastructure for the event to date. The TNDV team mixed multiple audio channels using a Soundcraft Vi3000 console, and all tracks were recorded to ProTools HDX and a Sound Devices Pix270 recorder.

“Audio is extremely important to this event given the subtle sound dynamics associated with the action, and the Soundcraft console provides us with the capacity and feature set we need to manage a multitude of audio tracks coming from seemingly every direction,” said Dugger. “Each of the clinicians wore a Shure UHFR wireless lavalier microphone, and our truck additionally provided 10 Shure microphones for round-pen effects. This ensured that viewers felt exactly what it was like to be in the pen while the animals are working. On the video side, the Roadies see the footage we produce coming from the Hitachi cameras on Road to the Horse TV webcasts, and attendees see it on the two giant screens in the arena. Road to the Horse also uses our video produced on the truck for their annual commemorative DVDs, which they sell directly to fans.”

The event marked the tenth anniversary of the technical production partnership between mobile video specialist TNDV: Television and Road to the Horse, which was co-founded by Owner/Producer Tootie Bland and her late husband Steven 14 years ago. For the past 10 annual events, TNDV crews have captured the excitement of the Road to the Horse championships using multi-camera video production gear and large TNDV mobile video units. This included the event’s first HD production in 2010—the first equine event to make that transition.

In the years before TNDV signed on to provide full-service video production services, Road to the Horse video was shot by a team of college students wielding camcorders, who generated hundreds of hours of videotapes that were very labor-intensive to edit down for DVD distribution. While Road to the Horse continues to offer DVDs of the productions, today’s loyal fans called Roadies can also subscribe to Road to the Horse TV, an online streaming service that showcases current and archival footage of the events. 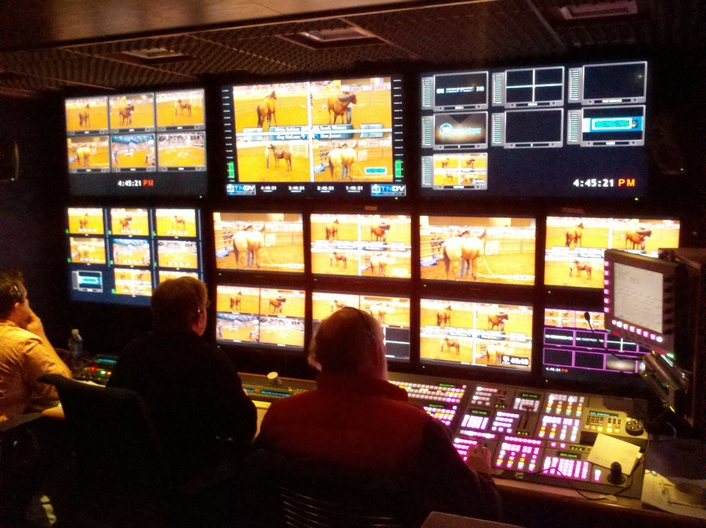 “Over the years, we’ve seen a tremendous amount of growth, including the size of our audience, the seating capacity of our venue, and the scope and impact of our events and video on the world community that follows us,” said Bland. “TNDV has also grown right alongside us, expanding their truck fleet, crews, and video production capabilities. We’ve really gotten to know the TNDV staff personally and consider them to be a very special part of our RTTH family.”

“It means a lot to us to be a part of Road to the Horse story, and we really look forward to working at the events every year,” Dugger added. “We’re especially proud of our mutually rewarding technical partnership with Tootie Bland and everyone at Road to the Horse, and the way this prominent equestrian event has grown and evolved over the years.”

Formed in 2004, TNDV: Television represents the culmination of over 22 years of broadcast and live production for Nic Dugger, owner and president; and his staff of full time engineers. TNDV produces events from small single-camera productions all the way up to multi-million-dollar international TV events, and takes pride in building custom solutions for challenging productions of any size, in any situation.  Recent projects include the live concert productions at the NCAA Final Four, the Re/Max Long Drive Challenge on ESPN, and for the first time in broadcasting history TNDV produced the 2014 Hat Trick of Country Music Award show red carpet specials, including the CMA Awards, the CMT Awards, and the ACM Awards.