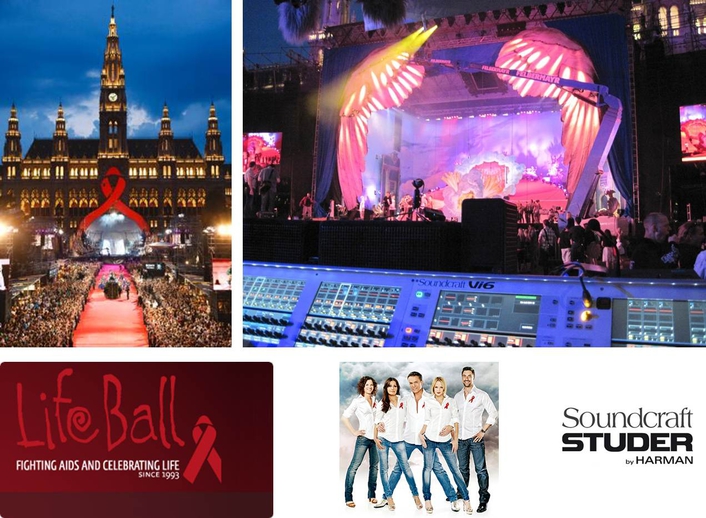 Life Ball: Handling the sound mix was a pair of Soundcraft Vi6’s — with Soundworx’s Klaus Hübner
Taking place each May in Vienna since 1993, Life Ball is Europe's largest AIDS charity event and this year once again featured a star-studded cast of artistes and VIPs, with the theme dedicated to the element of air under the slogan, “Spread the Wings of Tolerance.”

Leading the party and joining the 20,000-30,000 revelers in the Rathausplatz, outside Vienna’s City Hall were Janet Jackson, former US President Bill Clinton and Brooke Shields. Aside from music, fashion was also high on the agenda, and among the guests was world-famous designer, Vivian Westwood.

TV stations from all over the world attended, and for the main outdoor show audio coverage needed to extend across a distance of almost 200 meters (via three speaker delay lines) to the back of the Square. Handling the sound mix was a pair of Soundcraft Vi6’s — with Soundworx’s Klaus Hübner system teching for production company Redline Enterprise, overseeing the 96-input Vi6 at FOH, and Didi Hepp on a second Vi6 down in Monitor City.

For Hübner this year’s event proved particularly challenging as production built a stage with two large 9-tonne wings, which had to be relocated during the event.He said that with so many artists appearing — and performing live for just one number — decisions as to whether the artist performed live or in playback mode often have to be made on the fly. “For instance, the orchestra was relocated to the catwalk and downgraded to playback. We also received information that Natasha Bedingfield and Natalia Kills would play live but the staging company was late with the setup of the wings which meant we ran out of rehearsal time, and the promoter decided to do all of them with playback (which was probably the better choice).”

However, having worked on at least half of the Life Ball events since 1993 Klaus Hübner is used to making decisions on the fly — and now accompanied by his favourite Soundcraft digital desk the entire process becomes easier.“We originally set up the Vi6 for everyone to play live but in the end needed only about 32 channels plus FX. But you never know that in advance and we wanted to make sure we didn’t run out of channels.”The desk was configured for MADI and an analogue split was provided for ORF, the Austrian TV station.

Having set up and optimized the system, Klaus Hübner worked alongside fellow engineer Andy Frey (of Freyaudio). “I work regularly with him on TV shows and always enjoy the experience. He cares about the show, and I care about the system. He really likes the Vi6 and also specifies it for his shows.”The advantages of using a Vi6 for this type of versatile, multi-act show were self-evident. “The Vi6 is easy to use — it is flexible, reliable, sounds good … and has all the facilities we need.”The fact that two engineers can work on it at the same time was another important attribute, he said. “It meant that sometimes when Andy Frey was operating rehearsals I could be preparing for the next rehearsal on the right bay.”

Klaus Hübner singled out the Vistonics II™ interface for special praise. “It is easy to use with the touchscreen, and the Copy & Paste facility is really important — in a stressful situation, with a lot of changes, it is a life-saver. As for the dynamics I love the Lexicon FX, and I use the De-esser as a dynamic EQ, which works perfectly.”Each channel also features an 'F' (function) button which can be programmed   more or less to the engineer’s preference — which is another huge bonus, he says.

“Finally, I just like the way that the Vi6 is self-explanatory … anyone familiar with digital desks can use this, and I personally never needed to refer to a manual.”Radio and wired microphones at the Life Ball were supported by AKG and the sound engineers patched some spare backup radios on the second input. “So in event of emergency, it would have been easy to change the mics without the need to change the thinking of how to operate the show!”