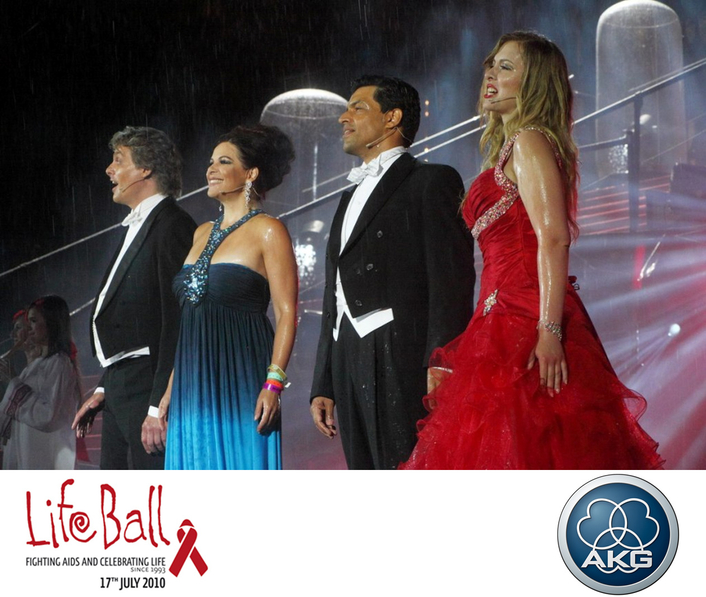 Morton Larsen - Bettina Schweiger - Natalia Ushakova - Mehrzat Montazeri
Helping to raise awareness for treatment and prevention of HIV/AIDS around the world, AKG donated nearly 100 wireless microphone systems and handheld microphones in support of the 2010 Life Ball, held in Vienna, Austria. The event, which is one of the largest charity events in the world, is held annually to help raise money and awareness in the fight against HIV/AIDS, with the proceeds from ticket sales and donations going to various non-profit organizations for people suffering from HIV or AIDS.

AKG has provided the equipment supporting the Life Ball’s various concerts, speeches discussions and banquets for 10 consecutive years. This year’s microphone donation included numerous frequency-agile DMS 700’s, WMS 4500’s,IVM 4 in-ear monitoring systems and premium handheld microphones including D7’s, D5’s, C414’s and D40’s. AKG equipment was used in every presentation and on every stage throughout the entire night, providing clear and uninterrupted audio for some of the most popular celebrities and superstars in the world.

“The motto of this year’s Life Ball was ‘sow the seeds of solidarity,’ and that is exactly what we wanted to do with the donation of these microphones,” said Alfred Reinprecht, Marketing Manager, AKG. “Social responsibility is one of the mainstays of our corporate philosophy. Supporting the Life Ball has become a moral obligation for us and we are truly honoured and humbled to be a part of it all.”

Some of the attendees at this year’s event, which ultimately raised $1.9 million for the cause, included actress Whoopi Goldberg, fashion designer Calvin Klein and former US President Bill Clinton. There were presentations focusing on the fight against and prevention of HIV/AIDS throughout the night.

“This year’s Life Ball broke all of the previous records for attendees and for donations,” continued Reinprecht. “As a direct result of the donations made and money raised, those who are infected will have more opportunity for treatment and lives will be saved. For AKG to be a part of that on any level is tremendously rewarding.”