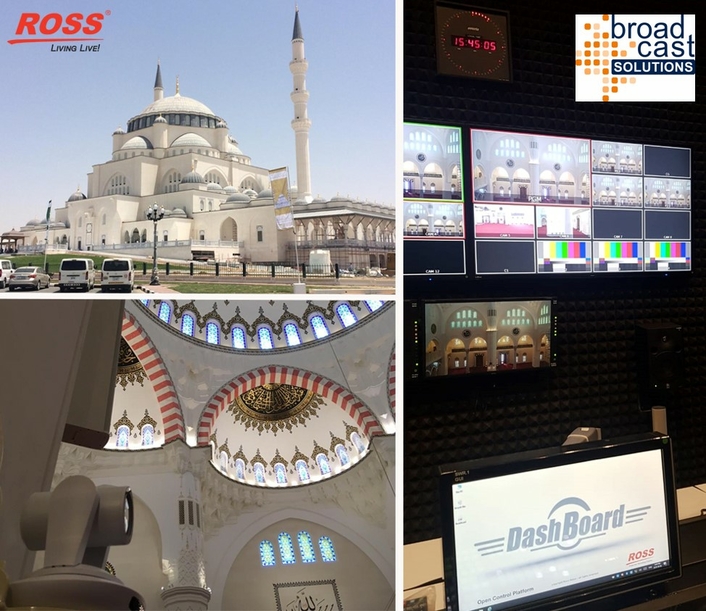 More than five years in the making, Sharjah Grand Mosque opened its doors in 2019, becoming United Arab Emirates’ second-largest mosque. The building occupies 185,806 square metres with a capacity to accommodate over 25,000 worshippers. Five thousand worshippers, with allocated seating for 610 women, can be accommodated inside. Surrounded by gardens and water fountains, the domes, minarets and columns reflect a unique Islamic architectural style and reminisce Istanbul’s Hagia Sophia. The main prayer hall has arched windows with stained glass, walls decorated with verses from the Quran as well as a large chandelier in the centre and red carpeting is part of the design. To not spoil the artistic impression, the approach to AV had to be a thoughtful one, and the system integrator had to meet a demanding time-frame for completion of the full system.

To make the prayers available to all faithful, even if they can’t visit the sermons, Sharjah Government Planning Department appointed the Sharjah Broadcasting Authority (SBA) as a consultant to implement a modern and innovative Broadcast System to cover the events within the mosque. The SBA again approached Broadcast Solutions ME to deliver a broadcast system to support the mosque’s busy calendar of Islamic events that includes several cameras, an impressive control room and consultancy. The customer demanded a broadcast system capable of airing these prayers and events to the masses with minimal human resources. 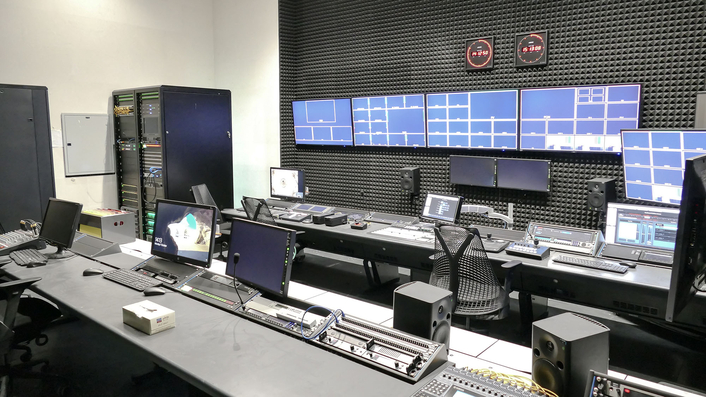 To fulfil the customer’s demands, Broadcast Solutions approached Ross Video which in return offered a white version of its PIVOTCam compact camera (12 of which are used around the mosque) and added the full broadcast equipment to the mosque’s impressive list of hard- and software tools. To not spoil the delicate and artistic impression of the mosque’s interior, Broadcast Solutions built a camera mount to ensure the cameras could be fixed discreetly around the prayer hall and building without standing out. The control room, located in the building’s first floor, is used to manage the cameras and to edit, store and air the content created.

Broadcast Solutions ME implemented a 36-input Ross Carbonite production switcher. Further Ross Video equipment in the signal chain is a pair of large Carbonite multiviewers, while SHC-9642 SDI to HDMI converters from Ross feed into Blackmagic Design SmartView4Ks used for audio monitoring. At the core of the system, a Ross ULTRIX-FR1 32x32 router handles signal management. To add further video signals to the programme Broadcast Solutions ME also deployed four Grass Valley camera control units in the control room desk to be connected to cameras using the connection panels in the hall. If an external broadcaster wanted to bring their cameras, they could easily connect to that wall box, and those cameras can still be controlled from the control room.

To assist communication between teams, Broadcast Solutions installed an RTS Odin16-port intercom system. Further audio equipment taking care of all audio signals in the system is a Yamaha DM1000VCM 48-channel digital mixer fitted with an MY16-MD64 Madi I/O card to provide the audio mix for the broadcast feeds. 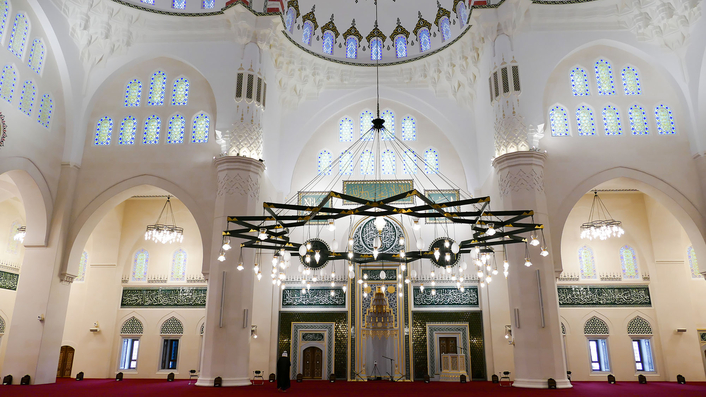 Broadcast Solutions ME’s project manager Salah Ayoub comments on the project: “But one of the major challenges we had was the time-frame. SBA would broadcast the opening ceremony from inside the prayer hall just two weeks after we began working on the project. Everything had to be completed during that time: shipping, installation and configuration.”

With a team of 12 dedicated specialists, Broadcast Solutions ME completed all major parts of the system to be ready for the first broadcast with no hickups. Broadcast Solutions fulfilled all crucial demands of the customer, and the project serves as a proper showcase for the company’s experience and know-how to implement complex systems even aside from the traditional broadcast business.