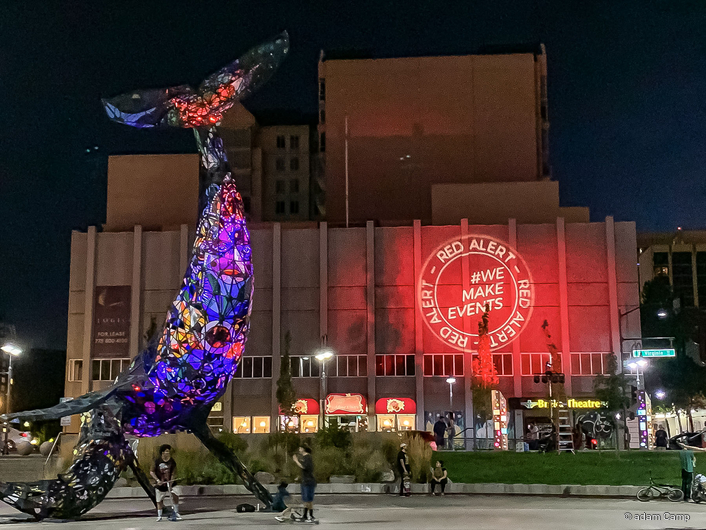 Around 2000 venues, places, landmarks, and monuments all over the USA were lit in red for the #RedAlertRESTART campaign on September 1st to highlight the critical situation facing the live events and entertainment industry and the need for lawmaker’s support of the RESTART Act (S.3814) to offer some sort of relief to the industry.  This latest red day of action was part of a wider industry campaign being led by the #WeMakeEvents movement, a collective of trade organizations including PLASA (the Professional Lighting & Sound Association). The idea of lighting buildings in ‘emergency red’ started in Germany with #NightofLightDE in June, and the concept caught on with red days of action organized in many European countries and the UK (initiated by #LightiItInRed on 6th July, followed up by PLASA’s #WeMakeEvents action on 11th August) as well as South Africa (#LightSARed on 5th August) and others.

As the color red has become synonymous with assisting the vast technical production infrastructure and all those talented individuals working in it who effectively facilitate live performance and the arts, Robe has been involved with all of these various ‘LightItInRed’ campaigns in some capacity.

For this one in the USA, signature Robe installations lit in red included the Bill Graham Civic Auditorium in San Francisco; the Video West HQ, the Hubbard Radio building and the Shrine Auditorium in Phoenix and several landmarks around Reno including the famous Reno Arch, the Believe sculpture and the fascia of the Bruka Theatre.

In Kansas City, the fantastic Moshe Safdie designed Kauffman Center for the Performing Arts was also transformed into red for the evening via its permanent Anolis exterior LED lighting installation.

“It was truly inspiring to see everyone in the business coming together to light it up red,” said Craig Burross, Robe Lighting North America’s sales director. “Such an amazing spectacle spanning the country, and we are proud to be a part of the message.”

Inside the Bill Graham Civic Auditorium, built in 1915 as part of the Panama-Pacific International Exposition, the balcony of the 8,500 capacity multipurpose venue, a favorite for concerts and music events was bathed in deep red by 20 x Robe ColorStrobe Lites supplied by Felix Lighting who are a ‘priority vendor’.

Another Planet Entertainment – the largest independent promoter in the US which operates this, other venues and the Outside Lands Music and Arts Festival staged annually at Golden Gate Park – joined the California Events Coalition and other organizations in supporting the nationwide #RedAlertRESTART campaign. 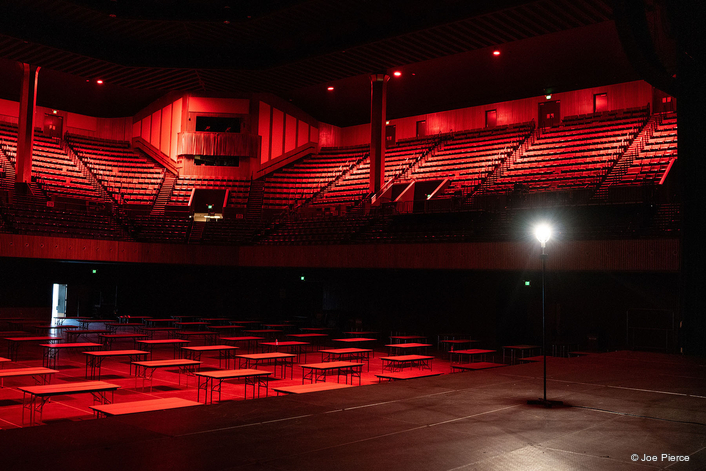 Roger Picone, Production Manager at Another Planet Entertainment, commented, “We work very hard at our jobs to remain invisible. The only time you see us is if there is a problem.  We are now coming out from behind the curtain to bring awareness to elected officials of our plight. We were the first businesses to close and will be the last to reopen. The economic ripple effect of our industry is staggering. Restaurants, Travel, Hotels, Retail Shops, Transportation, etc. are all affected by our decimation.

“Arts and Culture is what brings society together. We are vital to the recovery of this Pandemic, both economically and socially.

“Lighting buildings in red is a visually powerful tool for press, media and all the other communications needed to raise awareness.”

Other key Bay Area venues and events of theirs turning red for the night included The Greek Theatre at UC Berkeley, Oakland’s Fox Theatre and The Independent in SF.

Live events are a cornerstone of the California economy, before Covid-19 contributing around $90 billion to the California state economy and employing 1.4 million people in smaller businesses, but it is now expected to lose up to 80% of overall revenue.

The iconic Reno Arch – large letters spelling out R-E-N-O in red LED with the strapline “the biggest little city in the world” below – was built in 1926 to promote the Nevada Transcontinental Highway Exposition, then kept and used as a permanent downtown gateway. This third and current version of the Arch was installed in 1987 and the original incandescent bulbs replaced with LED alternatives in 2009. 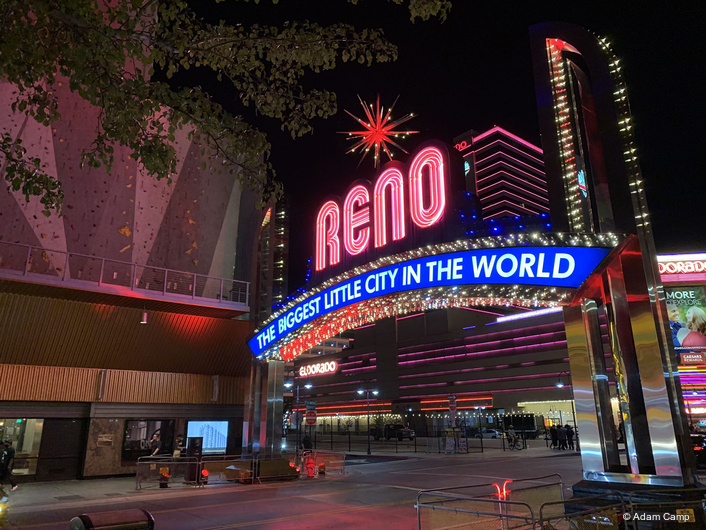 For #RedAlertRESTART the full arch was lit in red with eight Robe Spiiders and eight LEDBeam 150s.

The 12ft high letters of the Believe sculpture by Jeff Schomberg and Laura Klimpton – initially a Burning Man festival creation – is now another Reno inner-city centerpiece standing prominently in the ReTrac Plaza on Virginia Street.

Made from steel and featuring thousands of bird cut-outs, this was tastefully lit red with 7 x LEDBeam 150's – one fixture for each letter – and looked fantastic. The Peppermill team did the photoshoot with a dancer in front of the letters, and the LEDBeam 150s were so bright in red that they didn’t need any additional front light for the video camera!

The front of the popular – and usually super busy – Bruka Theatre on Reno’s main strip was washed with four LEDBeam 150s rigged on a stand located across the street, and a gobo was also projected onto the building.

These Robe fixtures were selected for compactness, portability and their brightness, explained Gary. As all the installations were downtown and in areas with high ambient lighting levels from streetlights, signage, car headlights, etc., they needed to be able to compete with all of that.

They were all controlled via wireless DMX.

Gary was keen to support the #RedAlertRESTART event. Having been in the entertainment business for nearly 40 years, it is his lifeblood.

“I’ve worked on major shows all over the country in that time, and all my many friends who’ve also made their careers in live entertainment are now sitting at home not knowing where or when their next show will be. Some of these are right at the top of the industry. Hugely talented people who have worked shows that everyone has seen, but because they are behind the scenes, no one knows they exist! 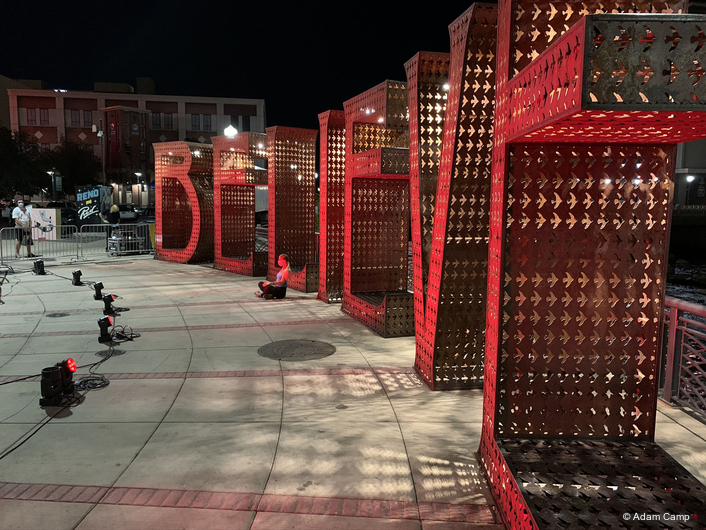 “It's up to all of us to not let people forget we need help!” he states, adding that he still has over 20 staff alone still furloughed with no return to work date in sight!

It is estimated that 96%, or as many as 12 million people in the live events industry are currently unemployed, furloughed, or have lost up to 90% of their income, and some of the world’s largest concert promoters are reporting a 98% loss of revenue since the start of the pandemic. Once a robust $35 billion industry, the live events business was the first to close and will be the last to re-open, sustaining increased financial losses in the tens of billions of dollars!

Rental and technical production company Video West illuminated their own HQ on 52nd Street using 14 x Robe ColorStrobes and 6 x BMFL WashBeams, as well as the Hubbard Radio building and the Shrine Auditorium & Event Center, both lit with ColorStrobes augmenting the existing building lighting schemes which were switched to red for the event.

Video West has over 600 Robe moving lights of different types in rental stock and Robe is a first choice for many of their projects.

Video West’s director of national lighting and senior account executive Donny LoDico explained how important it was being part of this campaign. 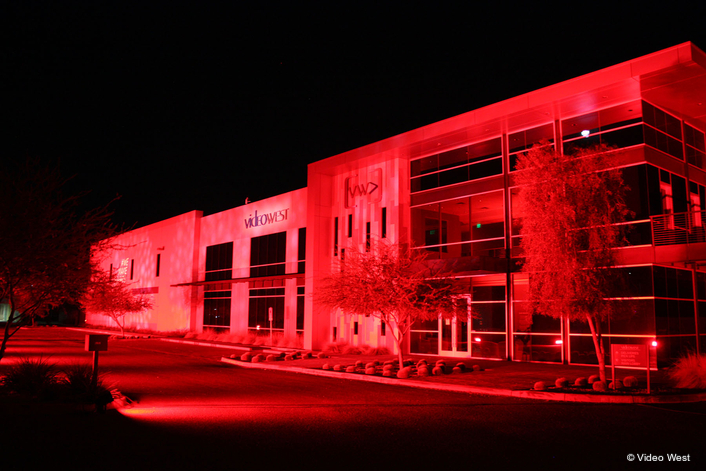 “Millions of us are struggling to keep food on the tables and roofs over our heads. We really need to set our sights on getting through the first quarter of 2021 with little or no income, and the Restart Act – or as we like to call it now, the #RedAlertRESTART – will do just that and more as we gain momentum again.”

Donny emphasized the need to start working on a way forward to safely get people back into venues, on stages and tour busses, etc., and restart the industry with guidelines in place.

“If our industry doesn’t start to push congress with standards, technology and processes to reopen, it will take twice as long!” he predicts. 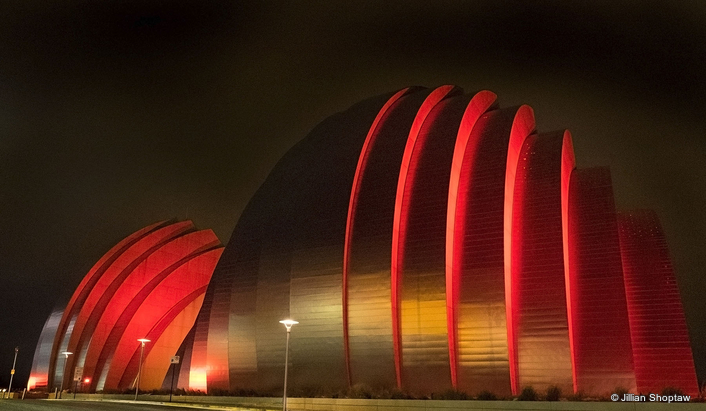 Kauffman Center for the Performing Arts

He also echoed the sentiments of so many saying that it felt so great engaging in the lighting action and “not only doing what we all love for an evening, but doing it with REAL purpose.”

And, close to resembling a giant artwork in design, appearance and visual impact, the Kauffman Center for the Performing Arts shimmered red for the night thanks to its permanent Anolis lighting installation … as did Spreckels Temple of Music in Golden Gate Park, San Francisco, which is also permanently lit with Anolis in-ground luminaires.