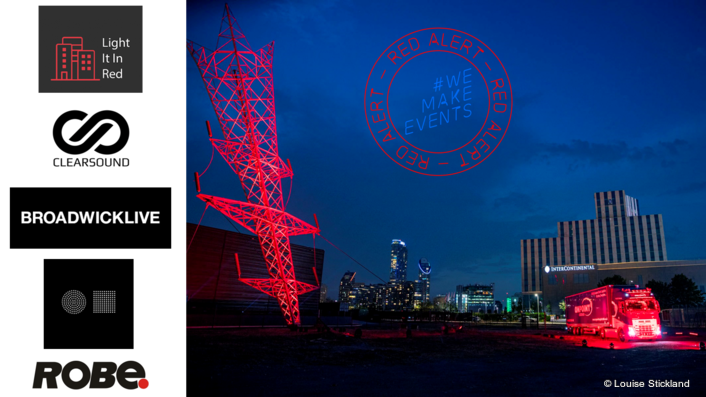 Robe UK partnered with Clearsound Productions, Venue Lab and Broadwick Live to support #LightItInRed and PLASA’s #WeMakeEvents national call to action on 11th August – to draw attention to the live entertainment industry and its need for sector support from the government to survive the coronavirus crisis.Robe moving lights were used to illuminate the exteriors of three flagship live entertainment venues – Magazine London on Greenwich Peninsula, Printworks London in Canada Water and Exhibition London in White City – all managed by Venue Lab, part of Vibration Group.

Escape to Freight Island, attached to Broadwick Live’s Depot Mayfield site in Manchester, was also lit in red for the day of action. The installation there was coordinated by dbnAudile which also includes some Robe LEDBeam 100 fixtures. dbnAudile is also the house supplier for audio, lighting and screens in both Printworks London and Depot Mayfield when the venues are running.

Simon Tracey, CEO of Vibration Group underlined the importance of the industry uniting, and was very proud to have Magazine London (which has previously been lit in blue for the NHS) lit in red alongside some of their other venues to highlight the struggles faced by live events and its massive support infrastructure. 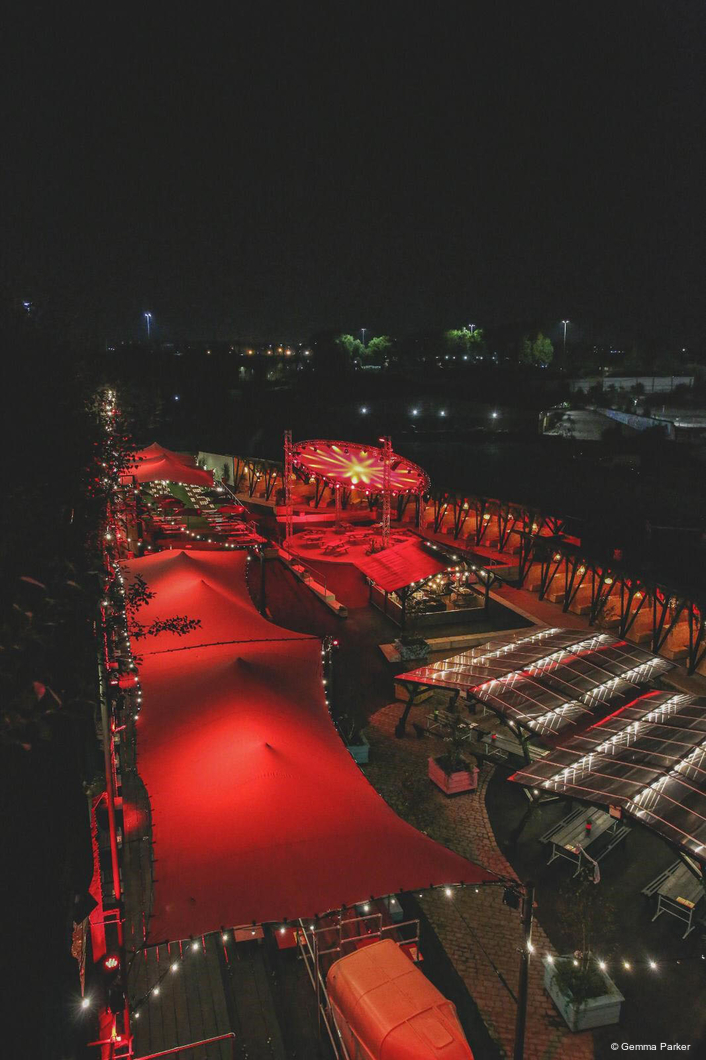 He’s particularly aware of the impact the crisis is having on individuals, both their own employees and the freelancers utilised across their various businesses. “Many talented people are currently out of work, so lighting our venues red is a tribute to them and hopefully restores hope that we are still fighting and WILL recover from this!”

Following the hugely successful grassroots #LightItInRed action on 6th July, Robe was delighted to reunite with the Clearsound Productions team project managed by Steven Haynes to work on this project for which 140 Robe lights were dispatched from Shipston-On-Stour. 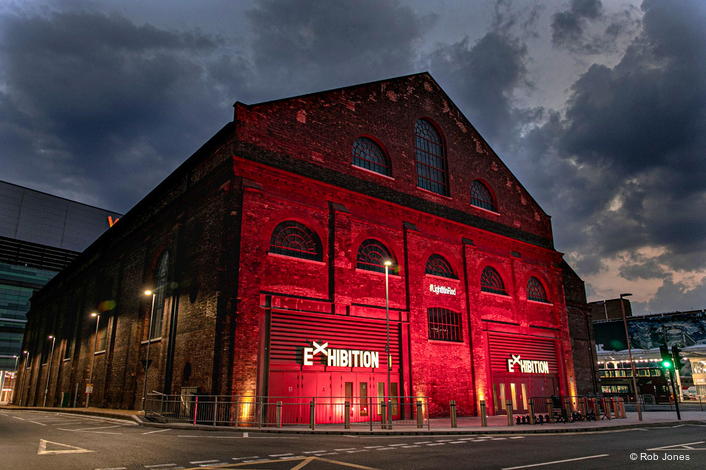 They were joined by six NRG (Next Robe Generation) students and young professionals – Jade Hughes, Ben Sugrue, Sam Blackmore and Finlay Russell all of whom were working as technicians for the day at Magazine, plus Sam Harris and Sam Levy, who worked alongside Dan and Liam at Printworks.

In addition to the venue, a neighbouring art sculpture titled ‘A Bullet from a Shooting Star’ was also lit in red; a famous, 35-metre tall latticed steel structure created by UK artist Alex Chinneck for the 2015 London Design Festival, which is embedded in land to the side of Magazine London. Inspired by the industrial heritage of the area, the work looks like it’s been randomly shot out of the sky and into the ground!

To the side of that, OnPoint’s 45ft artic and trailer also looked resplendent in red for the occasion.

States Steven, “The goal was to make as much impact as possible, and as well as symbolically lighting up in red to signal our support for the wider WeMakeEvents action, also to ensure that all three venues looked fantastic in red.” 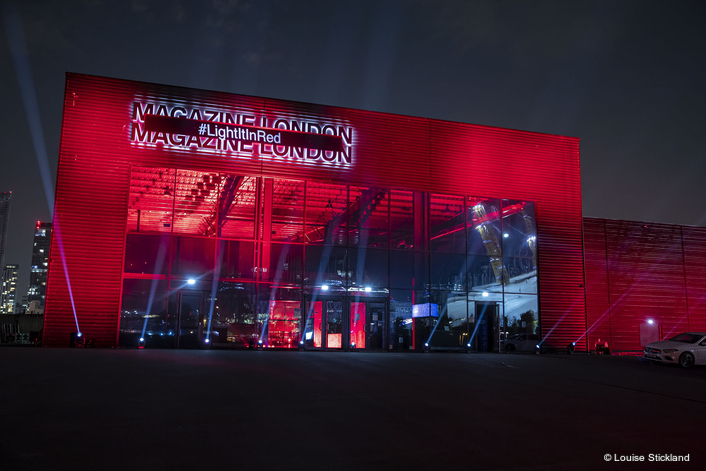 Most of the wall washing was accomplished using Spiiders – the fixtures’ intensity and quality colour mixing was needed to effectively transform the shiny black and highly reflective surfaces all around Magazine London. Achieving this effect was one of the major challenges.

The lights at the front and rear of the venue could all shine through the floor to ceiling window areas for a classy ‘double-depth’ look.

The Spikies, Pointes and MegaPointes were used for beam work and gobos.

The art sculpture, ‘A Bullet from a Shooting Star’, was up lit by four Spiiders and eight Spikies deployed around its base. It looked striking in scarlet, together with the truck, which was lit with eight CycFX8s – ideal for the trailer part – four LEDBeam150s and four LEDWash 300s.

All the lights at Magazine London were controlled by four consoles – an Avo Quartz and a ChamSys MQ100 for the back and front of the venue, an Avo Pearl Expert for the art sculpture and a ChamSys PC Wing for the truck – all strategically placed around the venue. A ChamSys MQ80 was used at Printworks and an MQ60 at Exhibition.

Robe UK’s head of marketing Theresa Gibson worked with Venue Lab’s team to secure access to the venues and commented, “It was great to have the opportunity to work closely with Venue Lab at three of their key London sites to support the #LightItInRed activities across the capital.

“Steven and the team at Clearsound Productions did a fantastic job in illuminating the iconic Printworks building and the beautiful Victorian façade of Exhibition London. Magazine London was the jewel-in-the-crown at the heart of Greenwich Peninsula, bathed in red glory overlooking Canary Wharf! 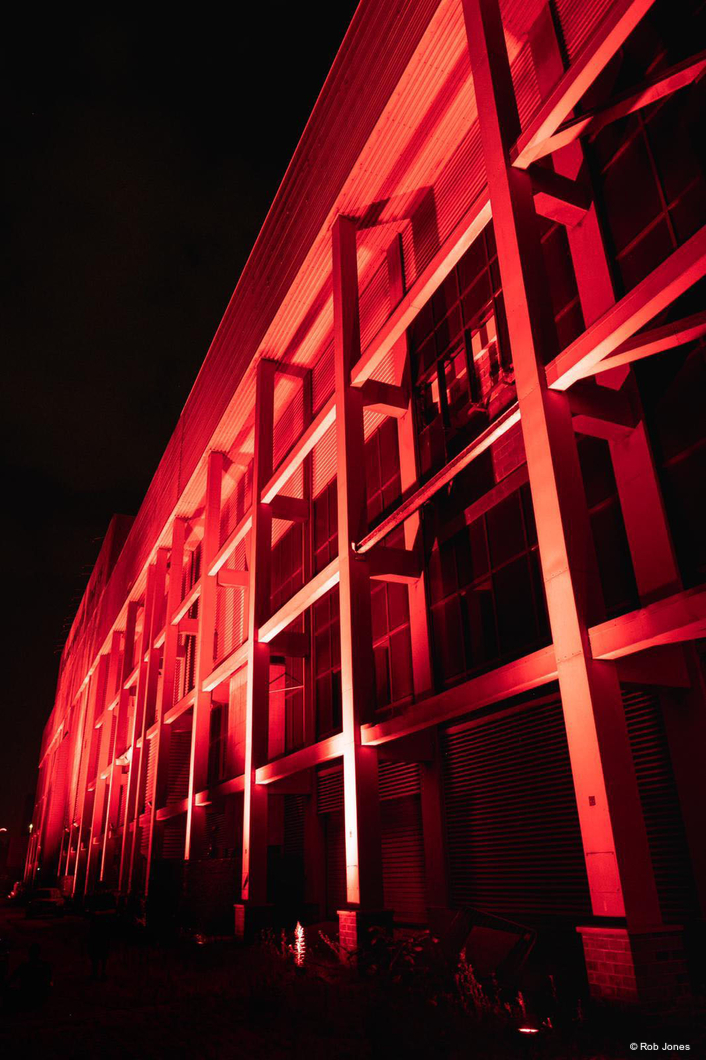 “It was wonderful to engage with a number of our NRG members who supported the event and joined forces with the Clearsound crew. The whole team felt immensely proud to be part of something very special at such a critical time for our industry to support #WeMakeEvents and #LightItInRed as they and other industry bodies joined forces.”

For Steve, joining forces with Robe for this event was “A fantastic and very positive experience.” He also enjoyed being able to offer the NRG crew some valuable practical and hands-on experience, and “the camaraderie was brilliant.”

In addition to the galvanising task of lighting the black-faced venue red, the whole site was operated as Covid-safe with social distancing as a sweltering heatwave engulfed the UK. 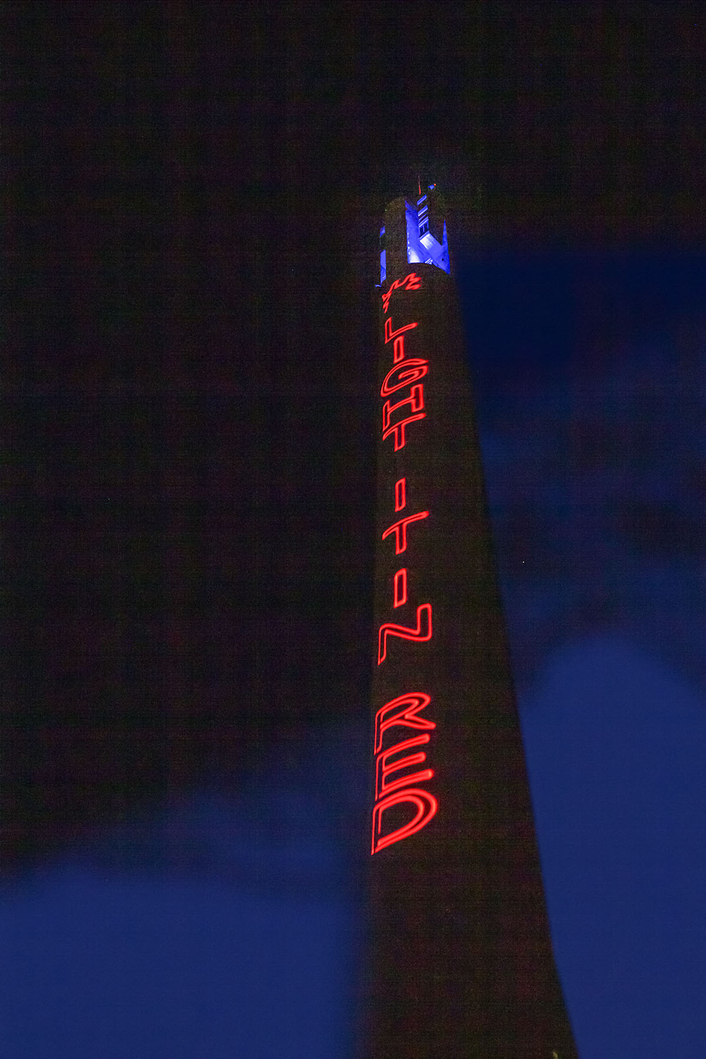 These key multipurpose venues – all of which feature Robe fixtures in their in-house lighting systems – were among 720+ which lit up red for the day of action.

Seventeen cities around the UK including Manchester – with a high profile flight-case push and march – Bristol and Milton Keynes all staged their own supporting events, while around 3,500 people joined in at the epicentre of the London action staged on and along the Thames at Bankside and the Southbank Centre.

The goal was to get a place for the live entertainment industry and its extensive infrastructure at the government negotiating table.