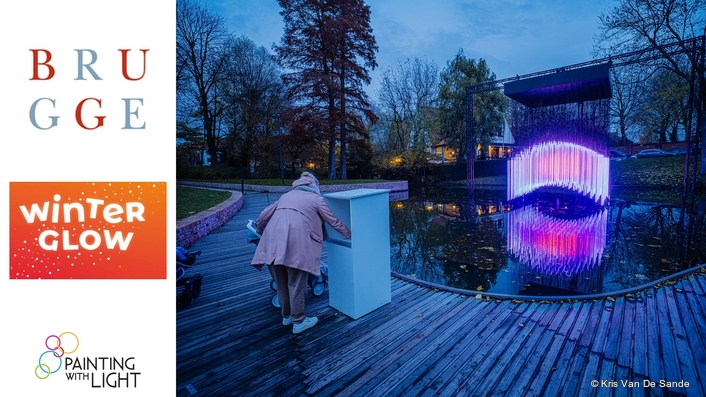 Painting with Light (PWL) has created a 2-kilometre walk-through lighting and visual ‘experience’ in the centre of Bruges – one of Belgium’s most beautiful and historic cities and a UNESCO World Heritage Site – to add atmosphere, luminosity and magic for the festive ‘Wintergloed’ (Winter Glow) season. Commissioned by Bruges Plus, the organisation responsible for the town’s cultural events, PWL’s winning pitch was led by Peter van den Bosch (business unit manager for leisure & entertainment’) and lighting expert Iiris Rousku who designed the various lighting artworks with their team.

It comprises a series of elegant, eye-catching, ephemeral and different lighting and projection-mapped installations, located in six different areas.

Each installation was inspired by an aspect of the warmth and hospitality of the people of Bruges and its many visitors over the different generations.

Different approaches were taken for each work – some can be observed, some can be touched and interacted with and others are fully immersive. 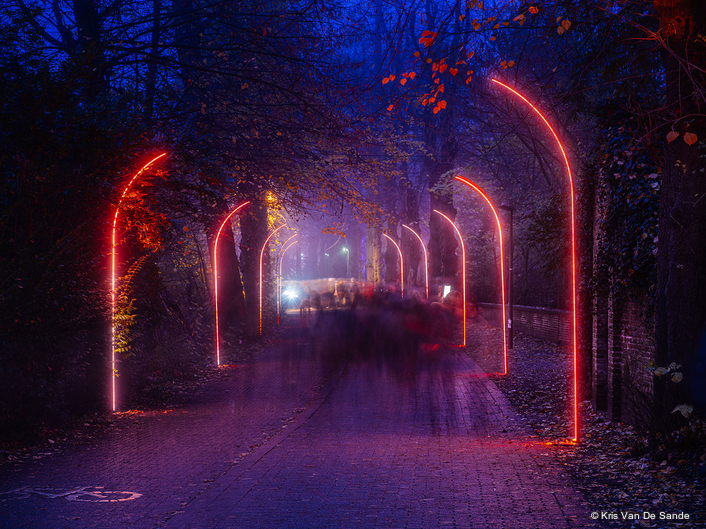 Some add a playful touch, others utilise synesthetic philosophies and ideas related to colour changing and mood empathy, while others riff with nearby textures, materials and natural elements like water reflections.

This, the first edition of Wintergloed includes the lighting of pathways, waterways, streets, buildings and monuments, trees and foliage, bridges and numerous other spaces and objects along the route, plus a special custom construction – The Cathedral – built in the Station Square, which is lit and projection-mapped.

One goal of the overall scheme was enabling visitors to view each piece of art from different angles, encouraging them to keep returning and re-engaging with the possibility of discovering something new each time. 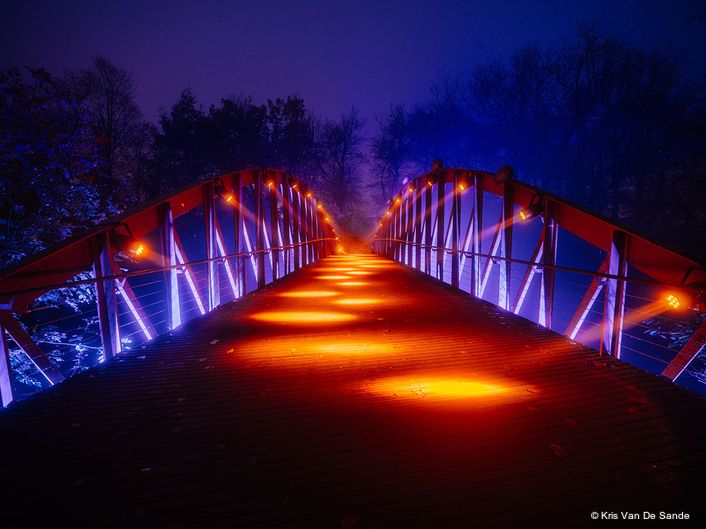 Part of the brief involved encouraging people to walk via Minnewater (Lake of Love) into the city rather than along the street directly from the station.

This new Wintergloed lit environment was crafted primarily for the enjoyment of the citizens of Bruges, rather than just as a magnet attracting additional tourists, so it needed to take a specific and thoughtful approach to impress those already familiar with all the locations … to see and relate to their spaces in alternative states.

Projection mapping is involved in two of the installations, the Station Square and the 19 metre high Poertoren Tower, constructed in 1401 by master mason Jan van Oudenaerde to store the city’s gunpowder, which is also a remnant of the late-medieval city walls.

An enormous moon is projected onto the tower using a Panasonic RZ projector linked to a Christie Coolux media server. This projection showcases the cycle of the moon over a 12-minute timeframe.

The Station Square installation is extremely prominent. The Cathedral is built from a customisable but off-the-shelf combined wooden / tented structure comprising four elegant arched ends which are 10 metres square and 11 metres high.

PWL chose the structure for its aesthetics and as a practical solution to house the video projection system. The team designed the custom print on the outer skins. 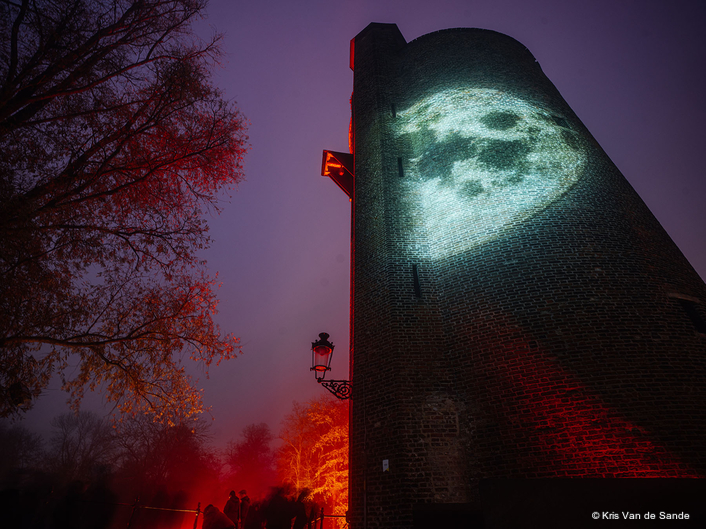 The full ceiling expanse and all the walls above 4 metres are filled with projections from five Panasonic PT-RQ32 machines rigged inside the structure, crossing over to project on the opposite walls, with the fifth one beaming up into the vaulted roof.

Video content is stored on one of PWL’s disguise d3 4x4 media servers and includes drawings and artwork collected from local schoolchildren based on the topic of ‘magical winter animals’. These were coordinated by PWL and Bruges Plus who liaised with local schools. Over 294 kids participated and can see their drawings “fall” from the sky inside the Cathedral ceiling, and selected images are highlighted each day.

In the evening, content transforms into a ‘dynamic galaxy’ created by the motion captured movement of people walking inside and outside the tent caught by a motion Kinekt sensor positioned on top of the tent  This galaxy is displayed each day between 7 p.m. and midnight - when the installations are powered off for the night.

The projection elements were installed by Vidi-Square and this part of the Wintergloed 2019 is sponsored by Panasonic.

The cathedral is lit using Chauvet COLORdash Batten-Quad 12 LED battens positioned all around in a curtain of light effect. Robe iPointes are rigged outside the structure to accentuate its central position and draw visitors – like a beacon – from other points around the city.

A major part of the initial Wintergloed concept was to involve local artists and talent in dynamic and engaging ways.

PWL and Bruges Plus also invited selected local street artists to express their creativity using the Cathedral as a canvas … but instead of painting with aerosol cans … they are doing it with light and via VR!

This event is live on five Saturdays over the duration of the Wintergloed from 7 pm to 9 pm. 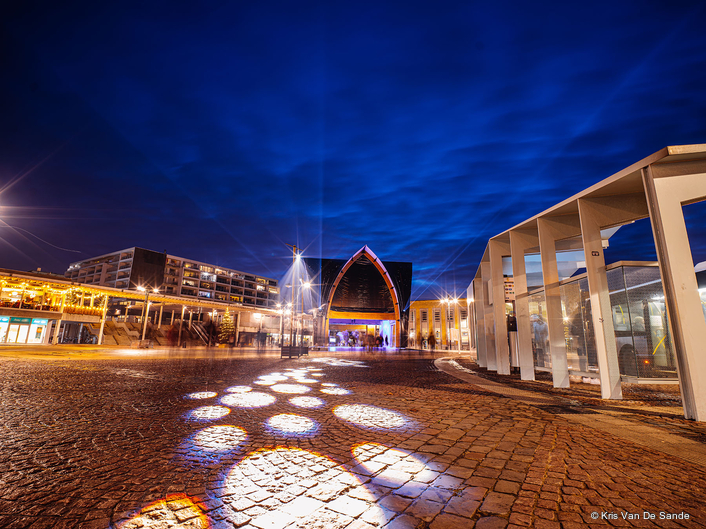 The artists paint in the VR environment (The Cathedral) wearing the goggles and their artwork is projected on the ceiling and walls in real-time so the audience can see the process. (They can also observe exactly what the artist is seeing in VR on screens around the space)

PWL has created special ‘light’ brushes with different colours and textures the artists can use in the VR world, and as the results are being projected (which is a light source) … it is literally painting with light! 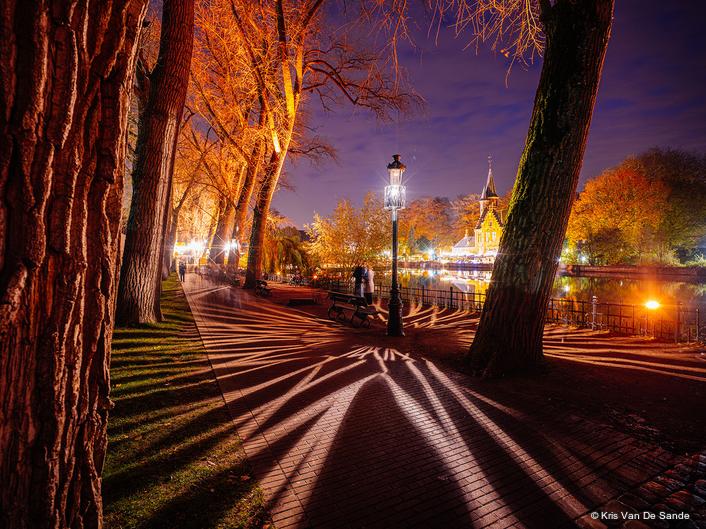 Each artist chooses their own topic to paint with light allowing their individuality and styles to flourish and also to keep everything varied – from architectural drawings with strong perspective to cartoon style quirkiness – and interesting for audiences whilst simultaneously instantly recognisable and attributable to each artist.

The installation was inspired by the city’s many bridges.

Patterns flowing through the tubes are activated by video content fed from a Christie Coolux media server and can be triggered by passers-by putting their hands inside a podium fitted with a sensor. Colours and patterns can be shifted by their hand movements.

The Gate & The Source

“The Gate” was inspired by gates in the city and along the Wintergloed route.

This piece features ten partial gates made from custom-made LED pixel profiles arranged to play with perspective and create a tunnel effect along the narrow lane in which they are located. Visitors can fully envelop themselves in this work, move around and see different things.

City in a Different Light

A major overall creative challenge for the PWL team on this project – which started with the first ideas and brainstorming back in August – was presenting so many different works that were also united by common threads, and finding imaginative solutions to energize a wide variety of spaces.

Another was keeping up with the pace of all the public spaces and not creating extra obstacles, plus adding in the numerous different layers of storytelling necessary to give the visitors a reason to explore. 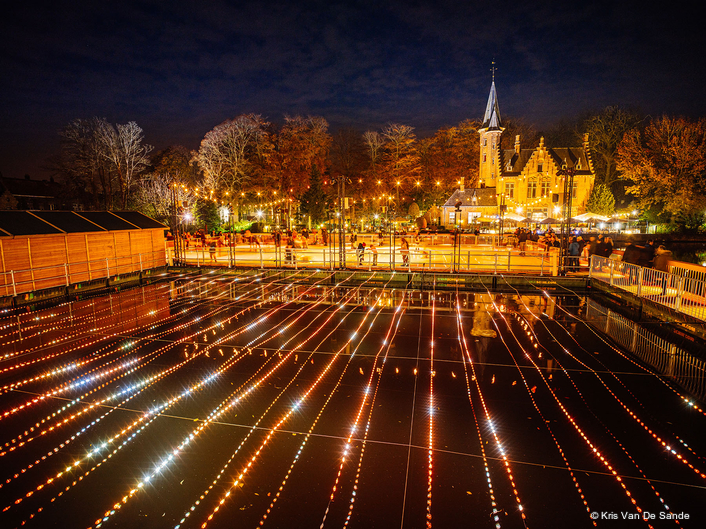 The technical production manager was Sam Van Maele from EVM who came onboard as soon as the scheme was green-lighted by the City.

They worked alongside crew from several different rental companies involved in supplying and installing the equipment including Panasonic, John&Jane, EVM, 71 Rentals, Epix InventDesign and Screenit.

Coordination of all these companies and the logistics of getting the right kit to the right places at the right times was also a complex and detailed task, dealt with by Iiris Roscou with the technical support of Sam Van Maele.

The new Bruges Wintergloed lighting experience has set the bar high and been a huge hit with the public in generating positive feedback and interaction across multiple communication channels. It’s also given the town’s citizens and visitors something beautiful and exciting to appreciate together with their city in the long nights.

This success of the project has underlined a lot of hard work, foresight, creativity and some superlative teamwork from PWL resulting in the ambition to create more of these stimulating and heart-warming lighting and visual events in other cities around the world.

Mayor of Bruges Dirk de fauw commented, “This lighting concept is a great ‘experience’ thanks to the harmonious interplay of light art installations, light stimuli and projections … and it is also functional. 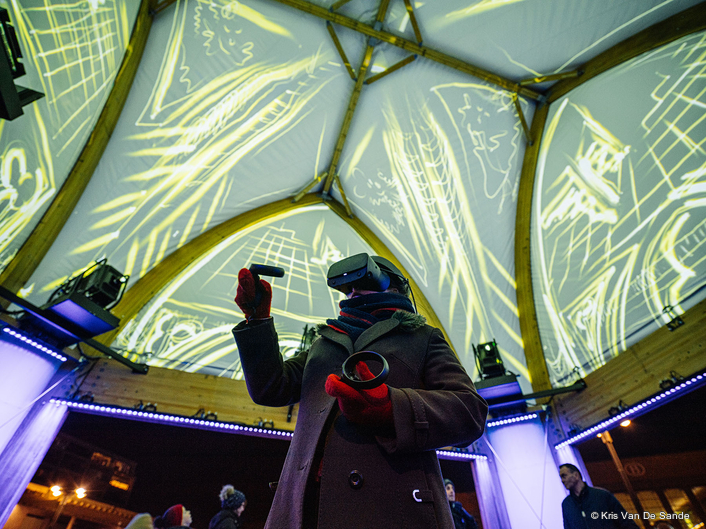 “Light has an all-encompassing effect enabling two walking directions which allow us to manage our end-of-year crowds much more flexibly.

“Light also connects. it connects and unites different points in the city, not only along the walks, but also, for example, by applying the same winter light patterns on 't Zand and on the Markt. It also connects past and present by highlighting our historical heritage in an innovative way.

“My sincere thanks to the Painting with Light team for their wonderful realization.”