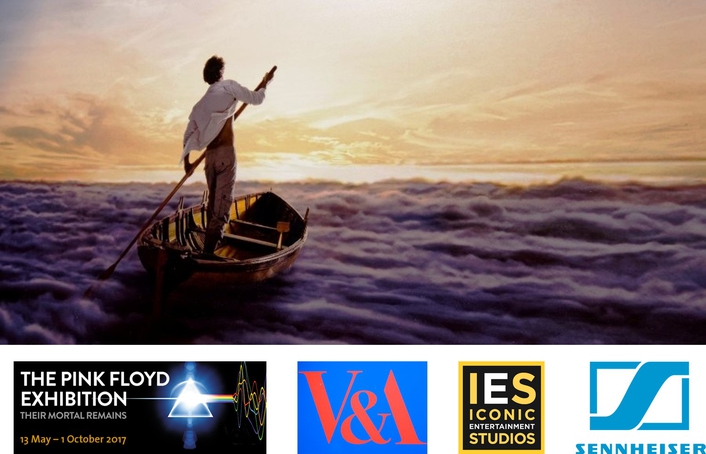 Presented by the V&A and Michael Cohl’s Iconic Entertainment

On Saturday 13 May, following years in the making, The Pink Floyd Exhibition: Their Mortal Remains will opened at the Victoria and Albert Museum, London (V&A). This major spring exhibition marks the 50th anniversary of the band’s first album, ‘The Piper At The Gates Of Dawn’, and debut single, Arnold Layne. The exhibition is promoted by Michael Cohl and Iconic Entertainment Studios.

The Pink Floyd Exhibition: Their Mortal Remains, originally conceived by Storm Thorgerson and developed by Aubrey ‘Po’ Powell, who worked closely with Nick Mason (Consultant for Pink Floyd), is an audio-visual journey through 50 years of one of the world’s most iconic rock groups, and a rare and exclusive glimpse into the world of Pink Floyd. It features many previously unseen objects collected over the band’s eclectic history. It begins with an oversized recreation of the Bedford van which took them from gig to gig in the mid 60’s. 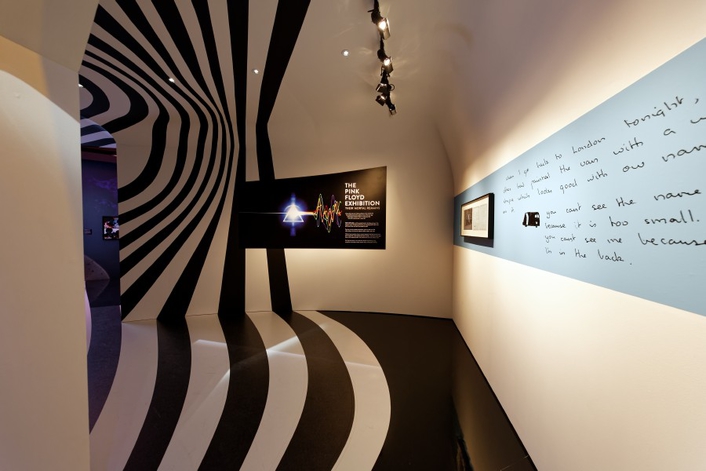 The scale and ambition of Pink Floyd’s imagery and live performances are encapsulated by several interactive, floor-to-ceiling installations by Stufish. From a massive representation of ‘The Wall’ stage set used during Pink Floyd’s original 1980-1 tour with the giant inflatable schoolteacher looming over ‘The Wall’ into the vaulted ceiling; visual trickery is adopted to create a parallax of Battersea Power Station complete with towering chimneys which is the London landmark pictured on the cover of Pink Floyd’s ‘Animals’ album, and a pitch-black space containing a holographic image bringing to life ‘The Dark Side Of The Moon’s famous prism.

The exhibition draws together many unique artefacts illustrating Pink Floyd’s relationship with music, art, design, technology and performance from every stage of their career and personal lives. Among the earliest exhibits is the punishment book and cane from the Cambridge And County High School For Boys, where Pink Floyd’s original guitarist and vocalist Syd Barrett and bass guitarist, vocalist and songwriter Roger Waters were pupils in the late 1950s. 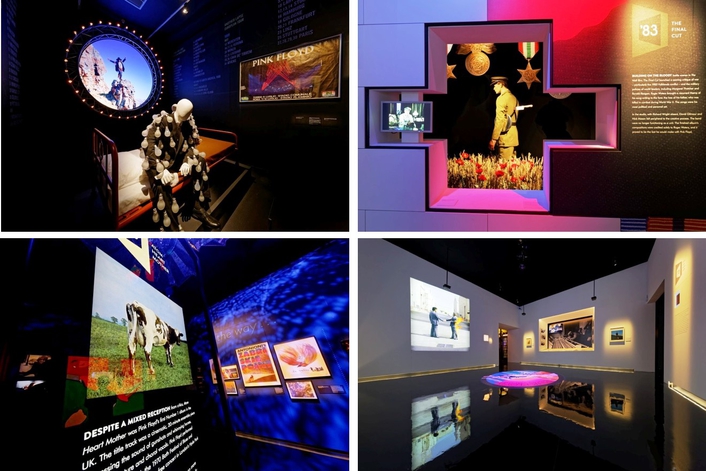 • Exhibition includes larger than life installations, including Battersea Power Station, The Wall and original inflatables into the rafters of the V&A gallery

The Pink Floyd Exhibition offers a rare glimpse of the band’s working methods, and plots their transition from a psychedelic pop group in the 1960s to the multi-platinum-selling albums band in the ‘70s, ‘80s and beyond. These include a letter, dated August 1967, from the BBC to Pink Floyd’s booking agent requesting an explanation for Syd Barrett walking out of a recent recording session, and Roger Waters’ handwritten lyrics for the songs Wish You Were Here and Have A Cigar.

The exhibition also offers an in-depth look at the band’s instruments and technology. Several of David Gilmour’s guitars, including his famous Black Strat, are exhibited, alongside Richard Wright’s early-‘70s era Mini Moog synthesiser and a treasure trove of effects pedals, hand-painted drum heads, echo chambers and more. Filmed interviews with the band members explain how this equipment was used to create Pink Floyd’s ground-breaking and experimental sound on albums such as ‘The Dark Side Of The Moon’, ‘Wish You Were Here’ and ‘The Wall’. Meanwhile, the exhibition’s three purpose-built mixing desks allow visitors to ‘mix’ their own customised version of the classic Floyd song Money. 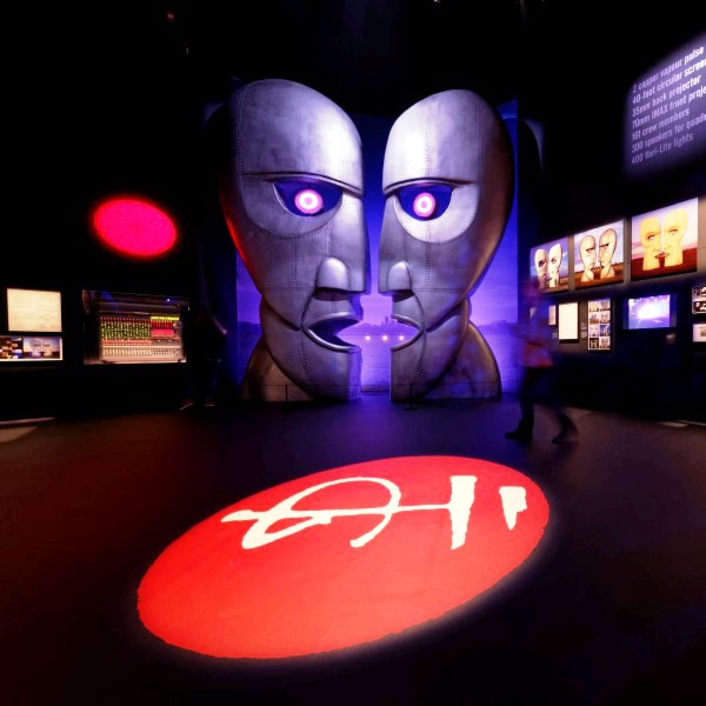 As well as its recreations of ‘The Wall’ and Battersea Power Station, Their Mortal Remains celebrates all aspects of Pink Floyd’s iconic imagery, as seen on album covers and on stage. Original drawings and blueprints showcase the development of these images, and highlight the group’s close working relationship with a team of world-class designers, lighting engineers, architects and illustrators, including the Hipgnosis design partnership of Aubrey ‘Po’ Powell and the late Storm Thorgerson.

These exhibits include the over 6-metre-high ‘metallic heads’ from the cover of 1994’s ‘The Division Bell’, the inflatable TV and refrigerator as used on Pink Floyd’s 1977 ‘In The Flesh’ tour; the ‘lightbulb suit’ pictured on the sleeve of 1988’s ‘Delicate Sound Of Thunder’ live album, and a life-sized model of the British soldier shown in the artwork for 1983’s ‘The Final Cut’ album.

The flow of the exhibition, in chronological order, is enhanced by music throughout and by the voices of past and present members of Pink Floyd, including David Gilmour, Nick Mason, Roger Waters and the late Richard Wright explaining their experiences and musical experimentation via sound specialist Sennheiser’s intuitive GuidePORT system. This culminates in the Performance Zone, where visitors enter an immersive audio visual space which includes the recreation of the very last performance of all 4 members of the band at Live 8 with Comfortably Numb. The track was specially mixed using Sennheiser’s ground-breaking AMBEO 3D audio technology. 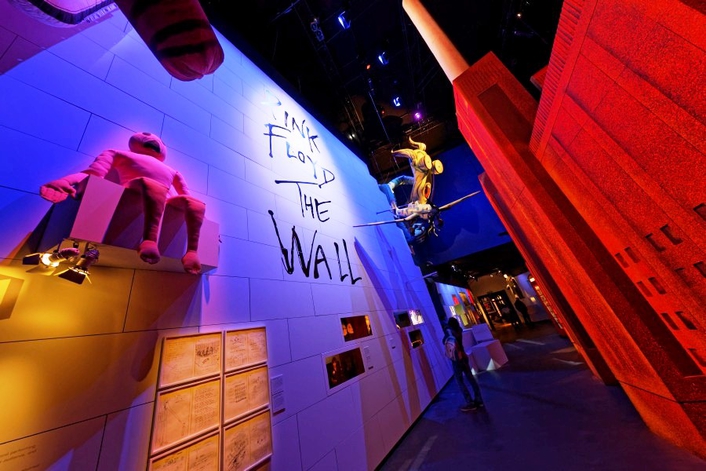 Each Zone is identified by a Phone Box, designed by Giles Gilbert Scott, who was also the architect of Battersea Power Station.

Pink Floyd remain one of the world’s most successful and enduring rock bands. Since their inception in 1967, their sound evolved and changed many times, but their ability to communicate with an audience and address the wider world remains constant, as heard in landmark albums such as ‘The Piper At The Gates Of Dawn’, ‘The Dark Side Of The Moon’, ‘Wish You Were Here’ and ‘The Wall’. Whe Roger waters left, the group continued recording with the much hailed, ‘The Division Bell’ and ‘The Endless River’.

The Pink Floyd exhibition is presented by the V&A and Michael Cohl’s Iconic Entertainment Studios, led by Pink Floyd’s creative director Aubrey ‘Po’ Powell (of the design partnership Hipgnosis) and Paula Webb Stainton, who worked closely with members of Pink Floyd including Nick Mason (Consultant For Pink Floyd). The V&A curatorial team is led by Victoria Broackes, Senior Curator, whose previous exhibitions include David Bowie is, and You Say You Want a Revolution? with Anna Landreth Strong, Curator, Department Of Theatre And Performance. The exhibition is a collaboration with designers Stufish, the leading entertainment architects and the band’s long-serving stage designers, and interpretive exhibition designers Real Studios.

The V&A is the world’s leading museum of art, design and performance with collections unrivalled in their scope and diversity. It was established to make works of art available to all and to inspire British designers and manufacturers. Today, the V&A’s collections, which span over 5000 years of human creativity in virtually every medium and from many parts of the world, continue to intrigue, inspire and inform. The V&A holds the national collection of material for live performance in the UK and has been collecting Rock and Pop works since the early 1970s including Pink Floyd material. Previous V&A exhibitions have included: David Bowie is, and You Say You Want a Revolution: Records & Rebels 1966-70 which includes objects relating to Pink Floyd. 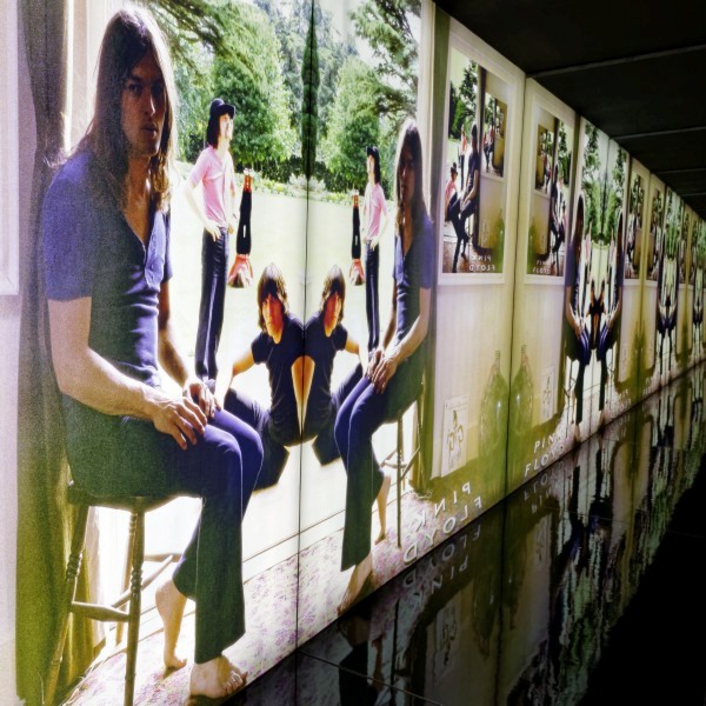 Iconic Entertainment Studios, led by Michael Cohl, is a full-service live event producer and promoter. Iconic specializes in the development of high-calibre touring exhibitions, unique live music tours, family arena attractions, and live theatre. Recent Iconic productions include An Evening with Oprah 2015, David Gilmour’s Rattle That Lock North American Tour 2016, and Barbra Streisand’s North American Tour 2016. Other events are Bodies: The Exhibition, and the highly-successful Jurassic World: The Exhibition, currently running in Melbourne. Active projects in production include Transformers Live, opening in China in 2017, and Jim Steinman’s Bat Out of Hell: The Musical, with its world premiere in 2017 in the UK. 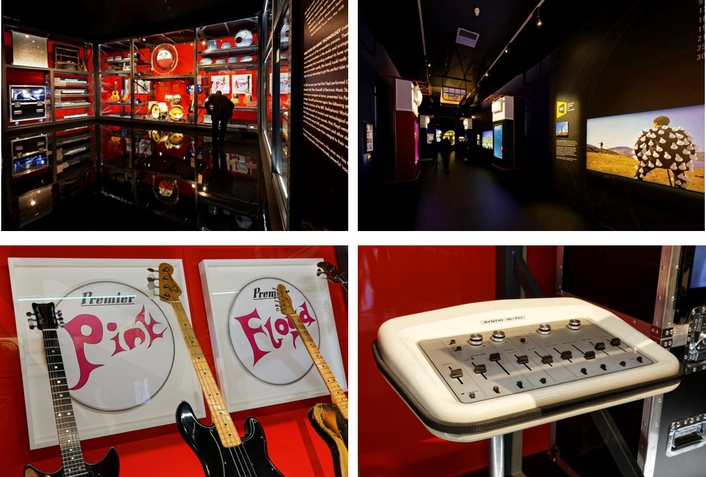 In 1967 Aubrey ‘Po’ Powell and Storm Thorgerson were approached by their friends in Pink Floyd to design the cover for the group’s second album, A Saucerful of Secrets. This led to a flurry of work from other bands including Free and Tyrannosaurus Rex. The name Hipgnosis was born out of a chance encounter with a door frame. Powell and Thorgerson had been looking for a name for their fledgling studio. At the time they shared a flat with Pink Floyd’s Syd Barrett and by chance Syd had scrawled in ball-point pen the word HIPGNOSIS on the door. Over the next fifteen years Hipgnosis gained international prominence. Their famed 1973 cover design for Pink Floyd’s The Dark Side of the Moon paved the way for other major rock bands to set foot in the surreal photo-design world of Po and Storm, resulting in many artworks for Led Zeppelin, Paul McCartney, Black Sabbath and more. 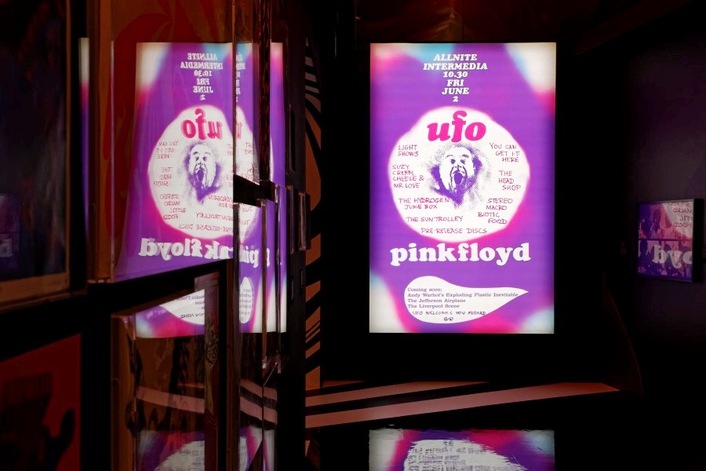 Paula Webb Stainton is a professional organiser of high profile international Events and Exhibitions. Clients of her company, Roebuck Webb Ltd, include McLaren Formula One, Ralph Lauren, and of course, Pink Floyd.

The Pink Floyd Exhibition: Their Mortal Remains at the V&A, London which Paula is co-curating with Aubrey ‘Po’ Powell, is Paula’s second exhibition for the band. Together with Storm Thorgerson, Paula Co-curated the Pink Floyd ‘Interstellar’ Exhibition at the Citie de La Musique, Paris in 2003, which became the institution’s most successful exhibition of all time. 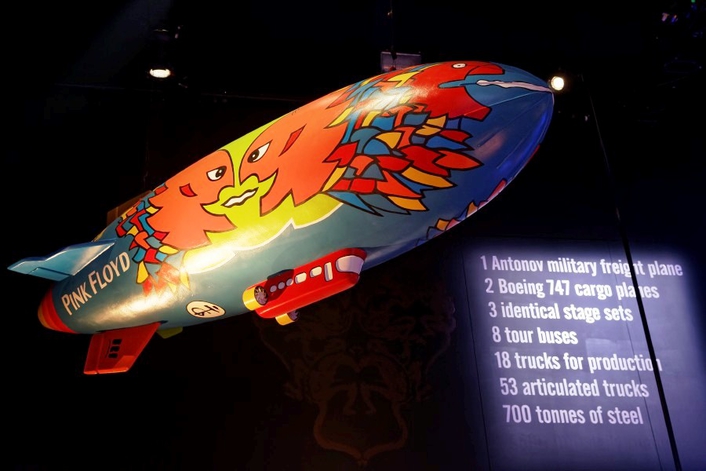 Founded by the late Mark Fisher, Stufish’s work has redefined the live entertainment experience. As Entertainment Architects they deliver every element– from designing the building and set to show creation and production. Stufish’s portfolio includes concert tours for Pink Floyd, The Rolling Stones, U2, Madonna, Lady Gaga, Michael Buble and One Direction. Theatrical designs include Monty Python Live (mostly), We Will Rock You and Cirque du Soleil in Las Vegas as well as their own production Soho which will open in May 2017 in the Peacock Theatre in London.  Other work includes the Buckingham Palace Jubilee Concerts for HM the Queen and the opening and closing ceremonies of the Beijing Olympics 2008. Permanent projects designed by the studio include the KÀ Theatre at the MGM Grand in Las Vegas, and the multiple award-winning Han Show Theatre, Wanda Movie Park, and Dai Show Theatre in China, designed for the Dalian Wanda Group. 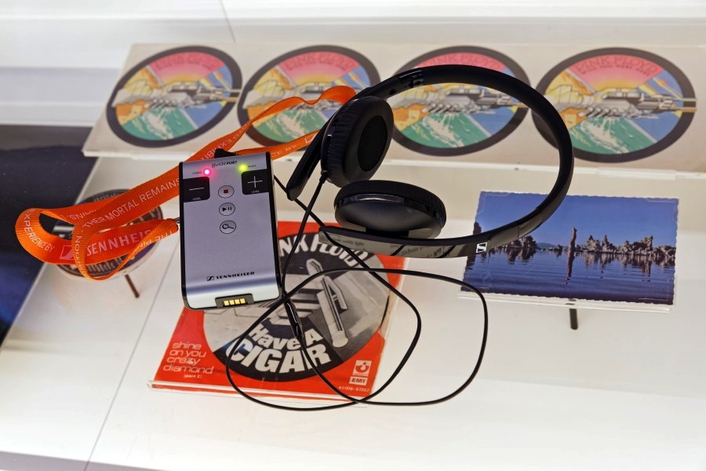 The audio specialist Sennheiser is one of the world’s leading manufacturers of headphones, microphones and wireless audio systems. Among its products is the world’s best headphone system, the HE 1, successor to the legendary Orpheus. Based in Wedemark, Germany, Sennheiser operates production facilities in Germany, Ireland and the USA, and is active in more than 50 countries through 19 sales subsidiaries and long-established trading partners. Earlier this year, the family-owned company launched AMBEO 3D Audio. This umbrella trademark covers the company’s 3D immersive audio products and installations. AMBEO promises the very best in immersive audio capture and reproduction – and a completely new listening experience. 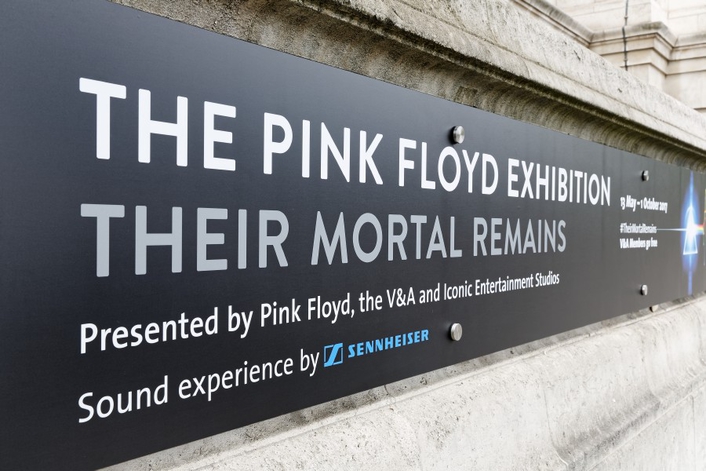