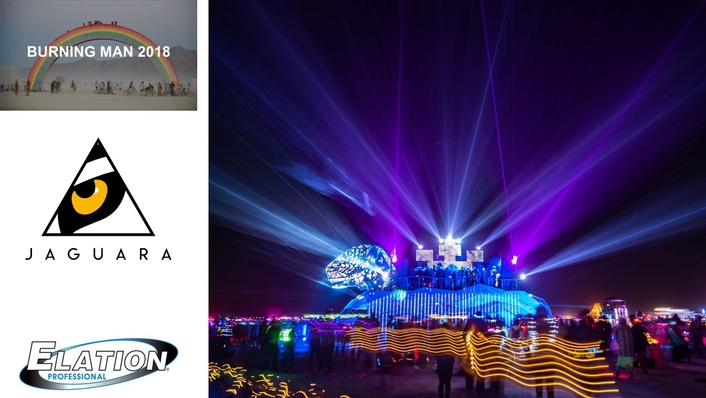 Sonic Design is an interdisciplinary team in Colombia that specializes in actualizing unique architectural projects and large events around the world. The creative team at Sonic Design recently designed and built a multi-sensory Art Car, JAGUARA, and incorporated Elation Cuepix 16 IP™ LED matrix panels in the design to help spread its environmental message.

JAGUARA is a collaborative project by an interdisciplinary collective of artists, designers, scientists, musicians, ancestral knowers, ecologists, communicators, teachers, technicians, and artisans from different areas of the American continent. Sonic Design’s director, Leo Vilar, works throughout the world on projects that bring focus to Colombia and led the team that created the Art Car vehicle that portrays a jaguar emerging from the Amazon River. 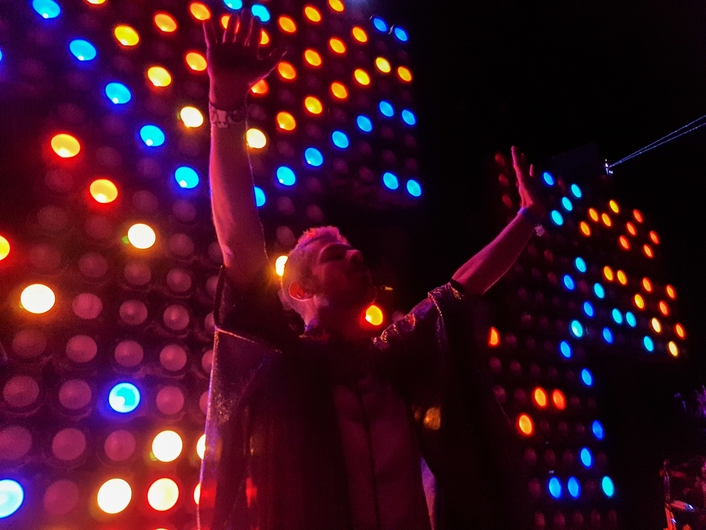 “Through this artful celebration of the jaguar, we want to raise awareness about the vulnerability of the main refuge of the jaguar, the Amazon Rainforest,” Vilar explains. “JAGUARA is inspired by the symbolism and powerful spirit of the jaguar, which represents, for most ancestral American tribes, the connecting force between the world of gods and the world of men. In a time where our trends of living are disrupting the balance of our planet and threatening our existence, JAGUARA comes to remind us of the essence of living in balance.” 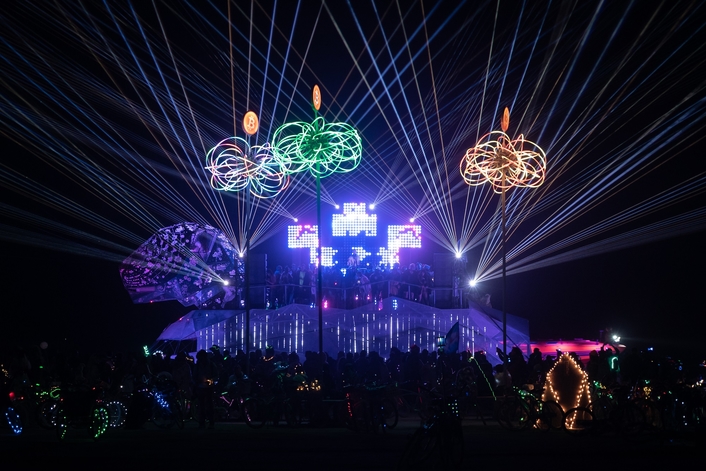 The Art Car
As director of design for JAGUARA, Vilar wanted to create an Art Car with a very unique character which would clearly portray the ancestral power of the Amazon rainforest and its vital role in preserving the balance of our global climate. “Many times technology pulls us away from nature but this project intends to work the other way around,” he said. “Through a very thoughtfully crafted design, complemented by state-of-the-art lighting and sound technology, we wish to raise awareness about the vulnerability of our most precious life supporting systems and about the critical moment we are living in now.” 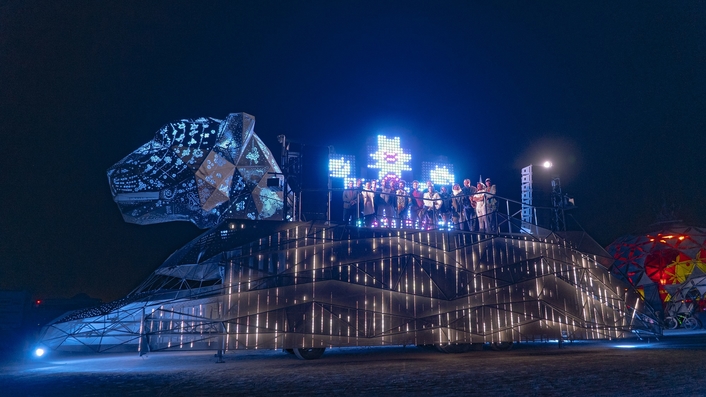 Burning Man
JAGUARA debuted August 26 – September 3 at Burning Man in the Black Rock Desert of Nevada. Burning Man, an annual gathering that explores various forms of artistic self-expression, embraces a special spirit in which a powerful community of conscientious people comes together to co-create a memorable life changing experience.  A very unique and special team came together to share ideas and create JAGUARA in the spirit of Burning Man, including global social-impact organization PlayaSkool, led by Jon La Grace, a long-time member of the Burning Man community and key to the success of the project,” Vilar says. 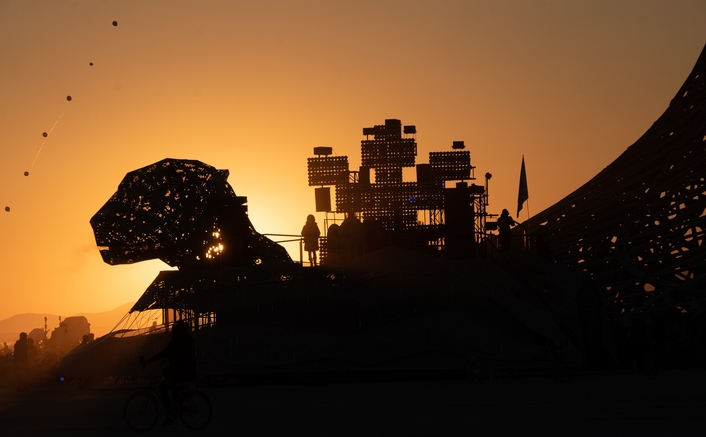 During daylight hours, JAGUARA was a rainforest oasis of patterns, colors and handcrafted art accompanied by sounds of nature, indigenous chants and tribal beats. In conjunction with PlayaSkool, JAGUARA hosted talks by Colombian anthropologist Carlos Castaño Uribe about Chiribiquete National Park in the Amazon rainforest, recently declared by UNESCO as world heritage, and the cosmic maloka of the jaguar. At night, the Art Car became an electro Latin music party featuring DJs, musicians, and performances from the counter culture movement in South America. Projection, lasers, and other effects enhanced the multi-sensory experience, a colorful multi-texture jaguar head emerging from the Amazon River. 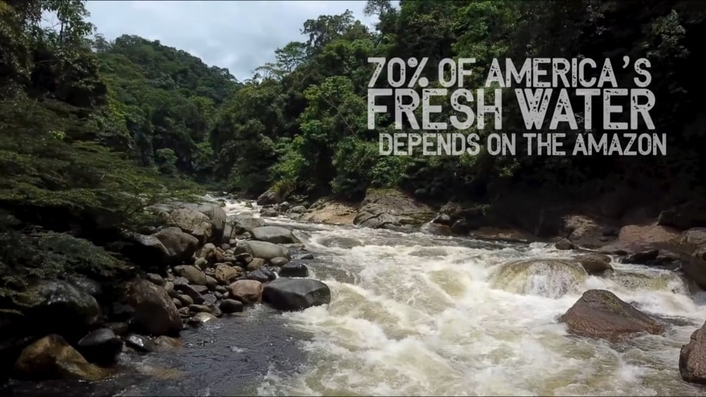 Cuepix 16 IP LED
Vilar served as Director on the project and one of the many hats he wore was that of lighting designer. The key Elation fixture used in his design was 64 Cuepix 16 IP LED matrix panels used to re-create a traditional ‘jaguar man’ figure, a symmetrical and schematic design placed center stage in the Art Car.

The Cuepix 16 IP is a powerful 4x4 matrix LED panel with all-weather IP65 protection capable of projecting high-impact color or white light, eye candy or pixel-mapped effects. Vilar first saw the fixture at the Prolight and Sound tradeshow in Frankfurt last April and says that besides the quality of the light itself, he thought the Cuepix 16 was a beautiful looking light.

“It’s a unique product,” he said. “When I looked at the shape and design of the fixture, it looked like a sculpture and I thought it would be ideal for the JAGUARA project. It has nice pixels but it also looked nice as part of the jaguar man sculpture.” The designer also chose the product because of its IP65 environmental protection. “We needed something robust and powerful and looked at many products before choosing,” he said. “The Cuepix had to handle a tough environment and it proved to be a quality light that could stand the desert sand, heat and rain.” 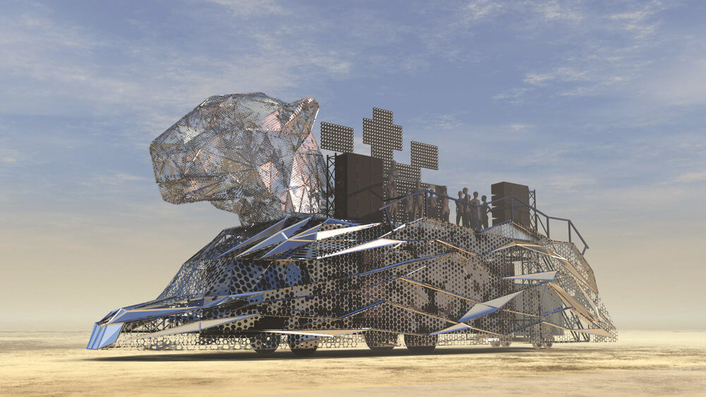 The Cuepix panels were used for colorful backlight as well as light onto the audience. The artwork that Vilar pixel-mapped across the Cuepix panels was inspired by traditional Colombian beaded Shaman bracelet designs. “Using Cuepix was a more artistic way to create pixels instead of the more typical LED screen,” he said, adding that he ran the fixtures during the day but dimmed them all the way down to only 1% at night.

Art with a purpose
JAGUARA debuted at Burning Man but is a concept that will continue to be communicated in different artistic manifestations. Vilar says the concept will subtly change as they work with local artists to take the project around the world. “The important thing is to bring the message of consciousness and awareness of nature to people. It’s nice to do art with a purpose and we hope to inspire people from all over the world to join the conversation and become involved. There are many men and women who offer creative alternatives and have new visions for the world. JAGUARA wants to shine light on them and generate an echo for their positive actions.”

The JAGUARA project was well received by the Burning Man community, according to Vilar, and technically the designer says the project worked very well. “It was a great experience and we received just amazing feedback, nothing but great comments,” he concludes. 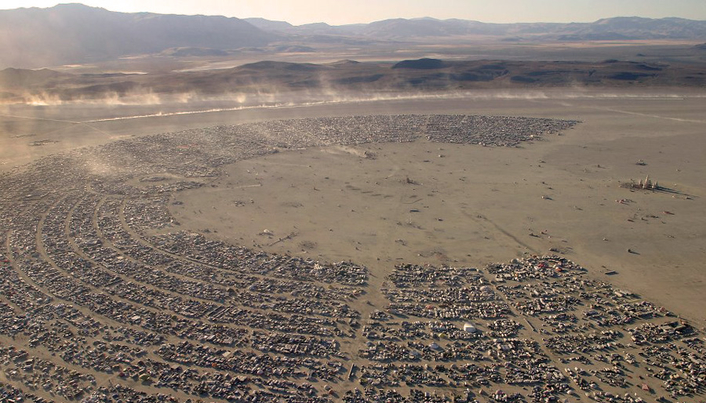