Getting to the Heart of Lighting the Sky in Krakow

The Tauron Arena in Krakow, Poland, is a favourite venue among artists, promoters, working crews and music fans on the normally busy year-round European arena touring circuit, but like most venues, it lies shuttered and empty while the live entertainment industry is ‘on hold’ as we fight the pandemic! Lighting designer Maciej Hofstede from design / creative direction specialist OF COURSE based in Bochnia, who would usually be juggling a full schedule of tours festivals and band shows, decided to go BIG when it came to participating in the recent #LightTheSky Poland lighting action.

He was among several other companies and organisations from Krakow joining the event on May 1st, including the FOH Foundation, the Tauron Arena, Studio Techniki Oświetleniowej (STO), Mediam and TechnoStage – in a show of strength from the second largest and one of the oldest cities in Poland.

Maciej and a crew of four – lighting crew chief Sebastian Szafrański plus Artur Szewczyk, Bartosz Syguła and Sławomir Broszkiewicz – created an impressive heart-shaped lighting installation in the Tauron Arena’s parking lot. The shape was inspired by the LightTheSkyPoland logo. 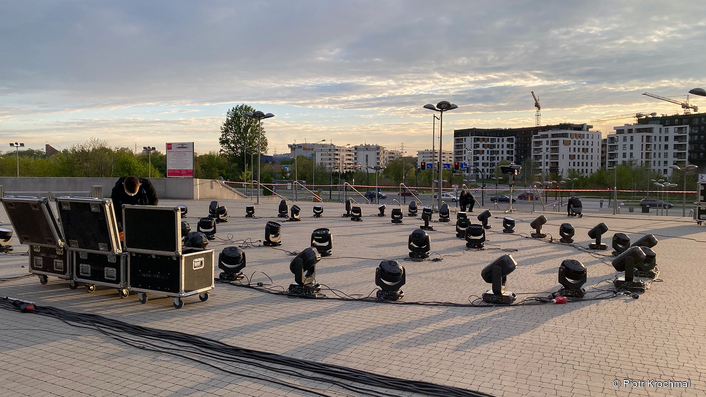 All the lighting equipment for the heart was supplied by Lighting Techniques Studio (STO), coordinated by Sławomir Broszkiewicz, and this included 20 x Robe Pointes, 14 x Spiiders and 20 x LEDWash 800s which were arranged in the massive heart shape, while other parts of the building and the surrounding areas were illuminated with LED floods and Sunstrips, all programmed and run from a  grandMA2 console.

“The goal was to make a light-work to thank all the various essential workers who have kept everything going during the pandemic,” stated Maciej.

He explained that while all the event and technical companies were closed and without the normal crazy workloads, they had plenty of opportunity to plan this action properly and express their gratitude. “At the same time, we were all absolutely desperate to be working on some sort of show and doing things like unloading and pushing flight cases and setting up lights – it was a great feeling!” 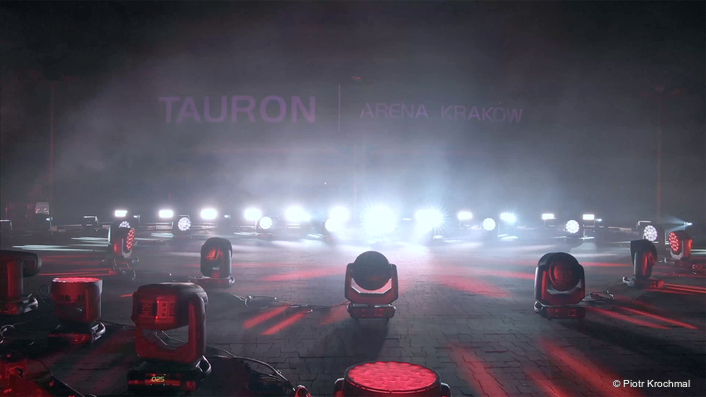 This was one of multiple installations taking place all over Poland and Europe that evening, and one of the most spectacular looking, with all the meticulous work and detail captured on video and in pictures by Piotr Krochmal.

Maciej completed the design and initial programming blocks using a visualiser at his company offices – during the programming he was inspired by the music of several different Polish artists!

Everything was prepared and planned thoroughly so it could be rigged outside the arena quickly and efficiently to maintain social distancing. 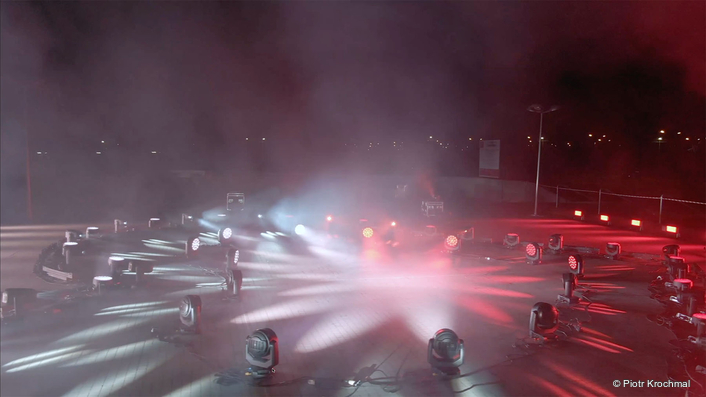 There was a bit of light rain on the day but otherwise the conditions were good for an outdoor installation.

The biggest challenge was getting the symmetry and dimensions of the heart measured out correctly. “We all joked that measuring ‘the heart’ is always complicated,” commented Maciej. In the end, they resorted to chalk and string “just like the old days” and as always, “the crew did an amazing job”.

The installation gained plenty of attention on social media and the feedback was hugely positive. “Most importantly, we expressed our solidarity with those on the front lines during the worst times of the crisis.” 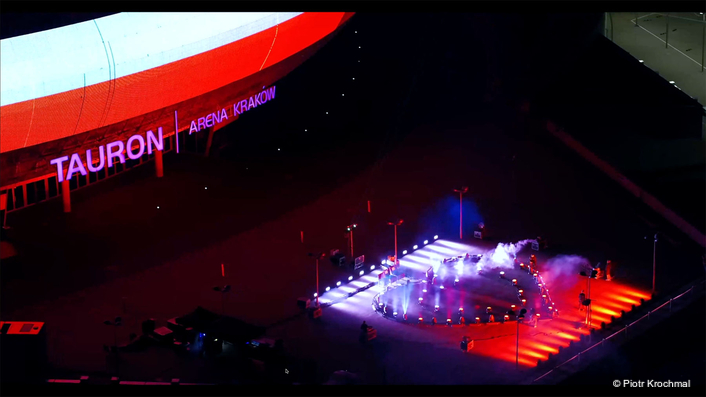 Maciej enjoys using Robe products in his work and has been a fan since the very early days of the brand ... back in the era of the ColorSpot 250 XT!

More recently, his show designs will often feature Pointes, MegaPointes and Spiiders. “I can't imagine doing a concert without these devices,” he states.

Right now, imagining a concert at all is what most people crave! OF COURSE also creates dedicated software for lighting designers, stage technicians and others associated with music, theatre and television, so in the lockdown he has been busy developing some new apps, plus working on projects of which at least some will hopefully go ahead in the autumn.