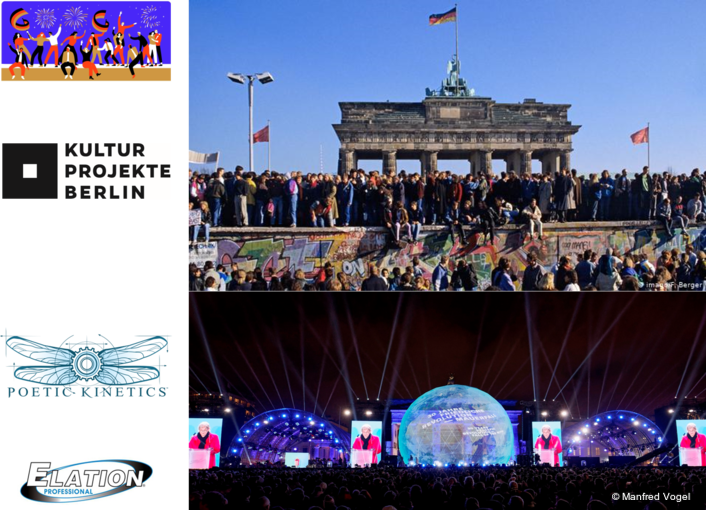 From November 4th through the 10th, Berlin transformed itself into a unique open-air exhibition and event venue as part of a large-scale festival celebrating the 30th anniversary of the fall of the Berlin Wall. Used to illuminate a 150-meter long artistic Skynet along Straße des 17. Juni, as well as a large festival-ending stage show at Brandenburg Gate, were Elation weatherproof Proteus and Paladin series luminaires.

The city honored the peaceful revolution of the autumn of 1989 with numerous exhibitions, events and art projects. One of the most interesting was a Skynet of approximately 120,000 ultra-light, partially reflective flags onto which 30,000 people from all over the world had inscribed with handwritten messages and memories of the events of 30 years ago. Installed on behalf of the Kulturprojekte Berlin GmbH, the Skynet was the creation of Patrick Shearn and his team at the American artist collective Poetic Kinetics.

The lighting design for the super light Skynet, titled "Visions in Motion," as well as for the closing ceremony at the Brandenburg Gate, was by Flo Erdmann working together with the Berlin artist collective phase7 performing.arts and their creative head Sven Sören Beyer. In order to be on both the safe and visually appealing side in Berlin’s November weather, IP65 rated lighting was a prerequisite.

"In November, at our latitudes, you have to expect bad weather and that's exactly what we got," stated Flo Erdmann. In fact, it rained nearly every day of the 14-day-setup and show. "For aesthetic reasons, domes were out of the question for me, so it had to be floodlights with protection class IP65. In the desired performance class and in the quality that one has to assume for such an event, in my view there is currently only one player on the market: Elation Professional.” 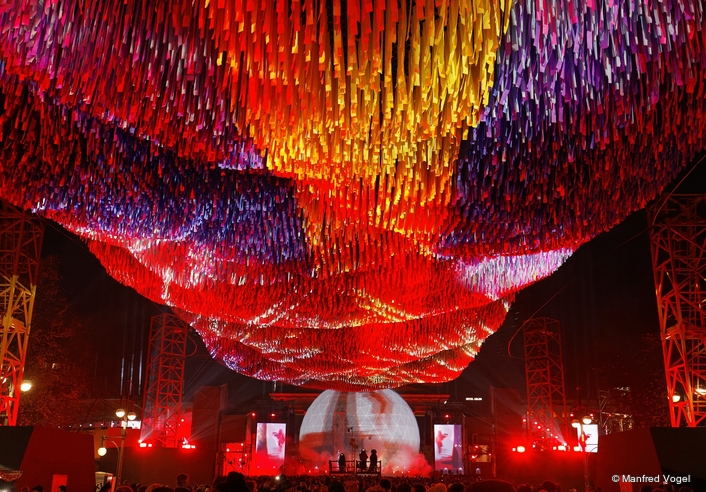 For illumination of the Skynet, the designer relied on twelve of Elation’s powerful 50,000-lumen Proteus Maximus™ LED profile moving heads, as well as 50 Paladin Panel™ LED lighting effects. The fixtures were placed on twelve large concrete pedestals that served as weights for the large crane towers to which the Skynet was attached. The lights illuminated the art installation from below, which enabled constantly changing impressions due to the dynamic capabilities of the luminaires and the flowing movement of the net.

"The Proteus Maximus impressed me in the showroom at LMP," Erdmann continues, referring to Elation’s German distributor. "It fits in perfectly with the Proteus series. The output is huge and thanks to the framing system, I can easily use it as a keylight for large outdoor shows. Even large throws are no problem thanks to the luminosity. The fact that the Proteus units do not require additional weather protection had a positive effect on the 'event’s optics' and the setup time. I'm glad we do not have to depend as much on domes these days. That was always a big shortcoming in my eyes. All in all, it is a very successful product that will certainly establish itself well in the local event market.”

The Skynet was a truly extraordinary piece of art and was admired throughout the festival week. "We illuminated it day and night, which made perfect sense on the gray days with bad weather," Erdmann says. "While the Proteus Maximus partially projected gobo patterns onto the floating installation, we used the Paladin Panels to illuminate the area. Thanks to its huge output, it worked very well. The panels have a very nice color rendering by which the work of art was perfectly illuminated.” The Paladin Panel is a new, multi-functional LED Blinder/Strobe/Wash light with high luminosity, chromatic performance and IP65 housing. Sealed against water or dust ingress, it houses 50 15W RGBW cells for vibrant color while individual cell control and strobe make it a versatile effect light or audience blinder. 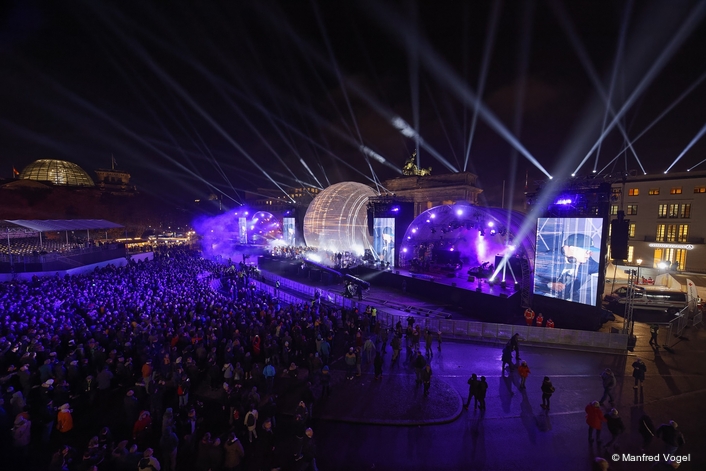 The festival week ended with a big stage show that was developed by phase7 with Erdmann serving as lighting designer and director of photography. Here, 68 PRG-supplied Proteus Hybrid moving heads were used for crisp beams on stage and around the Brandenburg Gate. "In outdoor events, the Proteus Hybrid has always been my first choice in the field of spot / beam hybrid luminaires," comments the designer, who was supported by operators Johannes Laugwitz and Raphael Grebenstein.

Erdmann says that he greatly values visualization, pre-programming and pre-production and relied on the popular Capture 3D visualization software during the creative phase of the project. "I think Capture is great. For me, there is currently no better pre-programming solution. In its functions, Capture surpasses, in my opinion, WYSIWYG. For example, I like to work with Cinema 4D and the Stage plugin and can easily open such projects in Capture, then briefly address and go. It's super comfortable and makes my work easier."

Based in California with facilities in Florida and Mexico City, as well as European offices in The Netherlands, Elation designs and manufactures a comprehensive range of innovative lighting and video products known for its superior performance, excellent efficiency, and outstanding price:value ratio, all backed by a hard-earned reputation for Total Support. Through nearly three decades of intelligent lighting development, our mission has always been simple: to provide best-in-class products and service while offering the best value:performance ratio in the industry, helping show designers and producers achieve their vision. From discharge to LED, intelligent to conventional, Elation products continue to be a part of the industry’s most exciting projects across the globe and our list of references is always growing. We invite you to take a closer look at www.elationlighting.com