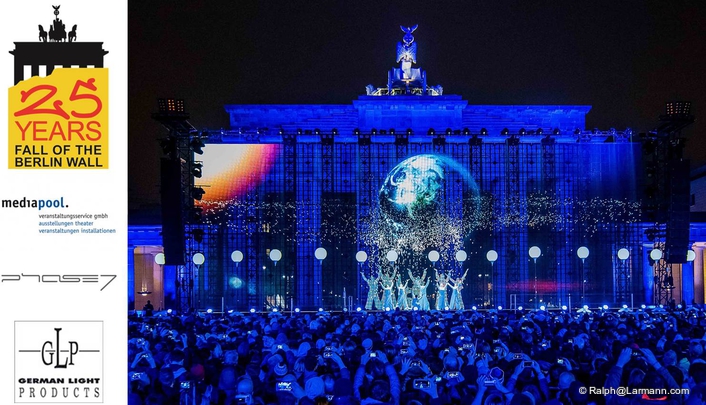 Björn Hermann designs historic lightshow in front of Berlin’s Brandenburg Gate
To celebrate 25 years of the Berlin Wall being torn down, a massive day of festivities took place on November 9th, culminating in a major ceremony in front of the iconic Brandenburg Gate.

Some 8,000 helium balloons were released into the night sky over Germany's capital at the culmination of events while GLP’s frontline X4 series impression LED automated heads also helped light up the night sky with a real tour de force for the central event — courtesy of the dynamic lightshow designed by Björn Hermann.Björn Hermann had been commissioned by show director, Sven Sören Beyer of phase7, the Berlin artists company responsible for setting the programme. They in turn were brought in by mediapool Event Services GmbH, while global rental company, PRG supplied all the lighting for the main event.

Conceptually, the LD said he wanted to make the Brandenburg Gate itself the star of the production and create a three-dimensional effect using his lighting armoury to build multiple layers.

His further challenge was to not only illuminate the Gate from the front, back or sides but by building five low weight 13-meter high freestanding towers, to be able to shoot right through the Gate itself. This feature represented the sunrise behind the Gate in the symbolic opening of the Wall (by moving the LED walls) as tens of thousands of guests populated the square in front of the Gate, the symbol of the division of Germany, to hear some of the political champions of reunification and witness a dynamic stage show.

Björn Hermann has been a long-time user of GLP’s evolving impression LED platform and for this show he sourced more than 150 fixtures, divided into the workhorse X4, the smaller X4 S and newly-launched super-sized X4 XL.

“Ever since the first impression 90 came onto the market, I have been fascinated by the lamp,” he said. “With the further development the RZ120 Zoom the possible applications expanded again. And now with the X Series GLP covers all areas of small, medium and large lighting sources. In terms of LED wash light they are among of my favourites.”

However, this was his first experience with the X4 series. He had requested the X4 (19 x 15W high power RGBW LEDs) for evaluation, and as soon as it had tested positively, he specified it for the show, working closely with GLP to complement the fixture with the smaller X4S (7 x 15W RGBW LEDs) and X4XL, the output of which he was particularly keen to experience.

Appraising the lights, he noted, “The X Series played an important role in the overall concept; the lamps both read well to camera and yet are completely suitable for use in a live context, delivering a very high light output.

“Since I illuminated the Brandenburg Gate with LED floodlights I wanted to use the same technique to recreate the design of the stage platforms and walkways, using additional colour mixing — and thereby emphasise the size of the stages.” In view of their compact size, he said, the X4 could be set into the scenic architecture, including the walkways and at the front of the stage area, while due to their high output, the X4 XL fixtures were positioned on the leading edges of the two main stages to produce additional impact.

The new star of the portfolio, the X4 XL boasts a mighty 55 individually controllable RGBW LED sources, each rated at 15W. With a vast palette from strident colour to soft pastels, each colour matched to align across units, giving them compatibility with X4 and X4S units that may be used on the same production. It also offers the same zoom range of 7° to 50° which, with such a high output, forms a ‘cannon of light’ at its narrowest angle up to a bright expanse of coverage at its widest.

Hosted by actor Jan Josef Liefers, there were also historical anecdotes among bands and artists appearing, while the event also included speeches from civil rights activists Freya Klier, Ulrike Poppe, political cabaret artist Wolfgang Koch and performances by top German musicians. In addition, Polish freedom fighter Lech Walesa and Mikhail Gorbachev and German Federal President Joachim Gauck, who accompanied the symbolic fall of the Wall (with the rise of the balloons) stood next to Major Klaus Wowereit on stage. There were fireworks and Daniel Barenboim conducting the Staatskapelle Berlin with Beethoven's 9th Symphony, Ode to Joy.

Summing up, Björn Hermann again praised the versatility of the impression X4 range. “For the speakers I was able to create a low-output base look to create camera backgrounds while for the bands I used the lamps to their full extent, depending on the mood of the music — generating full ‘rock ‘n’ roll’ movements.

“These lamps completely met my expectations. I like the product design, the light output, the colours and the zoom range … actually everything!”