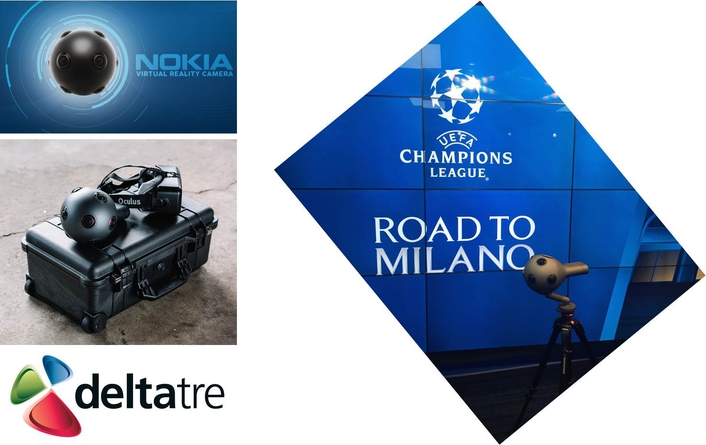 UEFA has selected the UEFA Champions League semi-finals between Manchester City and Real Madrid and Atlético Madrid and Bayern Munich for the first European demonstration of the newly launched Nokia OZO 360 virtual reality camera in a sporting environment.

OZO was recently showcased at the April National Association of Broadcasters (NAB) show in Las Vegas, and Nokia describe it as the world’s first professional 3D 360 virtual reality camera.

Bernard Ross, head of UEFA TV Production, said: “These OZO demonstrations continue to put UEFA TV Production at the forefront of broadcast technological innovation. It’s UEFA’s goal that one day the watching fan, wherever they may be in the world, will be able to watch a match through immersive virtual reality and experience the game as if they are there in the stadium. This demonstration represents the first step towards completing that goal.”

According to Nokia, OZO is the first virtual reality device to capture 3D 360 spherical video and 360×360 surround sound. OZO uses eight 2K by 2K sensors, each with a 195° field of view per lens, with eight microphones to record the accompanying surround sound, to deliver what Nokia call a fully immersive virtual reality experience.

The OZO demonstrations will be conducted across all four semi-final matches. UEFA was onsite both matchday and the day before at the first-leg matches in Manchester and Madrid to capture 360 video on-demand footage from the training sessions, press conferences, pre-game around the stadium – including the tunnel and dressing rooms – and key editorial positions during the match. The second-leg matches will be streamed live from Madrid and Munich, providing UEFA an opportunity to review the equipment, positioning and footage in a live environment in order to achieve the optimal immersive experience for both audiences and for sponsor requirements.

Prior to the introduction of OZO, virtual reality creation solutions rely upon complex rigs containing multiple cameras. The footage from these cameras, including the OZO, then requires further workflows, including stitching together, before a composite image can be produced.

The demonstrations in Manchester, Madrid and Munich will be conducted in conjunction with UEFA’s long-term broadcast supplier deltatre. deltatre will deliver the virtual reality technical operation and system integration – including stitching – as well as pilot various potential new virtual reality-centric offerings for UEFA rights holders.

“Having already invested heavily in broadening the range of broadcast and digital services offered to rights holding broadcasters, we are currently evaluating whether virtual reality content could be offered as part of our suite of UEFA Champions League ‘Next Generation Services,’” adds Bernard Ross.

Gilles Mas, director of international football at deltatre, says: “User experience is the real challenge for virtual reality in sport. At present most broadcasters do not have an appropriate, ready-to-air platform for this technology.  We are therefore assessing how, by leveraging the exisiting UEFA Next Generation Services digital platform, we could assist broadcasters in deploying virtual reality in their marketplace. The concept we are currently testing will provide live virtual reality streams, 360° clip publication and immersive applications for Gear VR, PlayStation VR and Oculus Rift.”

Tarif Sayed, director of business development at Nokia Technologies, add: “We are excited to see OZO in action during the UEFA Champions Leagues semi-finals and soon on the final. Football is a challenging sport for VR due to its large stadiums and fast movement, and we are proud that we are working with UEFA and deltatre to explore and define the best virtual reality​ experience based on OZO and Nokia’s suite of virtual reality technologies. OZO will be delivering 360 video and audio at the same time, as audio is key when it comes to football.”

UEFA’s virtual reality tests will continue at the Milan UEFA Champions League final 2016 and through UEFA EURO 2016, where a variety of other solutions and end-user experiences will be explored. A potential UEFA 360 platform on YouTube for the distribution of footage is also under review.