At the 9th of December 2015 Broadcast Solutions held its Broadcast Innovation Day at the company’s headquarters in Germany. During the event visitors had the chance to witness the world premiere of two new members to the slomo.tv product family. With BlackJack 4K and Arrow 4K the company once again sets a new standard in slow motion servers. Initially planned for this years’ NAB show both products were shown for the first time at the Broadcast Innovation Day and are available immediately.

BlackJack
With the only 3 IN 2 OUT 4K 50p server available in a single enclosure, again the manufacturer underlines its ambition to be one step ahead of the competition. With the brand new BlackJack 3G optionally 16 channels 3G can be recorded and up to 3 operators can edit 4 channels (slomo and highlights) with independent crossfade outputs – or it may just work as a 5-channel 4K 50p slow motion machine. Both varieties provide the usual comprehensive features that slomo.tv offers on all platforms. 12TB SSD - enough to record 266h HD with 100 Mbit/s are already on board. On all 12 input channels DMR is available. slomo.tv offers this unique engine with the capability to transcode all channels live during recording thus providing all content without delay to the external drives for further processing. With BlackJack all material is available in nearly all popular codecs – up to Apple Pro Res HQ 444.

Arrow
Slomo.tv not only sets new standards at the top level range of slomo servers – even in the entry level the company offers new gear. With Arrow slomo.tv offers a new 2RU server that provides the full range of functions inherent to the Simple R series. Only the storage has been replaced by conventional HDDs and choosing a larger housing the construction design efforts are reduced. As a junior member of the company's 4K line, Arrow 4K possesses unique features unavailable in servers of other manufacturers. In particular, the server supports simultaneous recording of 2 channels 4K 50p/4K 60p, the search on 2 channels and playback of 2 channels.
If space is not an issue arrow devices are a cost effective alternative to Simple R servers. Currently Arrow is 30% cheaper than SSD-based and 1 RU sized Simple R servers. Since its release 3 years ago Simple R is considered to be the slow motion server with the best price-performance ratio on the market. Arrow now makes professional video recording and live replay (slow motion) equipment available to companies that previously considered professional live replay gear unattainable due to budget reasons.

All slomo.tv 4K servers have the following advantages:
-    The use of a standard Full HD display for displaying the interface with built-in multiviewer. This eliminates the need of using several 4K / 4x3G SDI monitors.
-    Support of all available transmission options: 4K 50p/4K 60p signals via 4 x 3G SDI - quadrant transmission using 3G Level A / 3G Level B and SMPTE 425-3.
-    The ability to create Quick Time ProRes full resolution files natively compatible with editing systems.
-    SSD based subsystems, common to all slomo.tv servers.
-    Ability to work in a network. 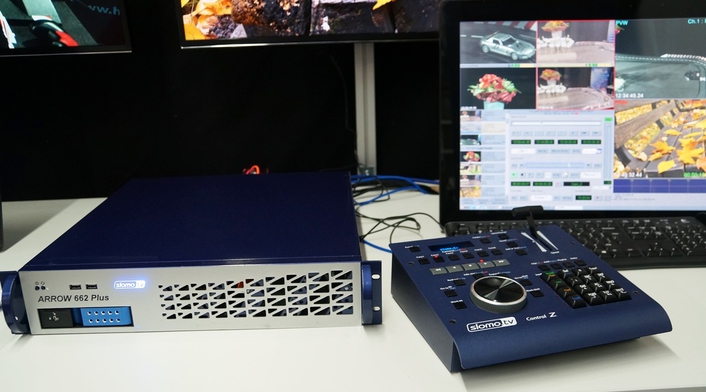 Broadcast Solutions GmbH is one of Europe’s biggest system integrators. For more than ten years the German based company stands for innovation and engineering „Made in Germany“. With subsidiaries in Europe, Asia and the Middle East Broadcast Solutions plans, implements and realises projects in the areas of Outside Broadcast, Satellite Communication, Studio and MCR Broadcast Facilities, Sport Arena Multimedia Solutions as well as mobile Security and Surveillance Solutions. A further emphasis of the company is to consult our customers when it comes to workflow optimization, trainings and production consultancy. Acting as a distribution company in Europe and worldwide Broadcast Solutions represents innovative brands like slomo.tv, ProSat Solutions, Aviwest, Robycam as well as Serenity. With more than 100 employees worldwide and working as a hardware independent system integrator Broadcast Solutions offers its customers tailor-made solutions – from idea to implementation and beyond.