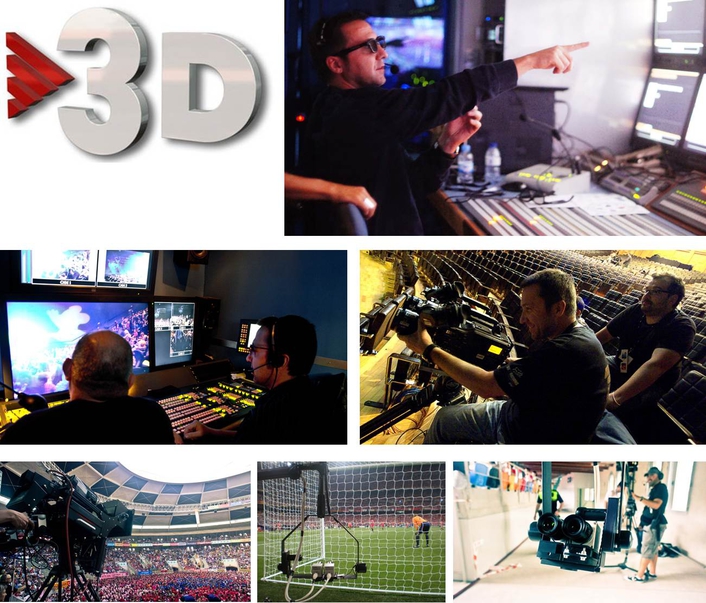 Most of TV3’s 3D productions were supported with contributions from Sony
In 2009 TV3 started working in 3D with the recording of “Llits” at the Teatre Nacional de Catalunya. The Llits3D production was made possible technically in cooperation with Ovide, Apuntolpapospo and Kronomav. The stereoscopic transmissions on TV3HD started in 2010. Since May 2010 every Saturday the TV3HD channel is broadcasting in 3D for about 2 hours. TV3 is the first TV station in Spain to broadcast 3D, and the first to do it regularly.

In early 2010, TV3 delivered some converted content (“Pirineus des de l’aire” or the travel program" Km33"). However most of the contend was released in original 3D, e.g. the final of the UEFA Champions League 2010 at the Santiago Bernabeu stadium, the film LLITS3D, the Lipdub3D Porrera, the Pastora video clip of Barcelona’s La Sagrada Familia during the visit of the Pope, the Tarragona competition of “castells” (human towers), the final male and female tennis matches at the Madrid2010 master, as well as concerts and the RipCurl surf contest in Portugal.TV3 has also broadcasted the “Festa dels Súpers” (a children’s festival), or the Patum of Berga festival.

The post-production of the LLITS3D film was carried out in 2010 and shown on television in 3D and 2D. Later LLITS3D was presented in many cinemas across Catalonia and at the Sitges Film Festival.

Together with Outside Broadcast, TV3 produced the 2010 UEFA Champions League final in Madrid in 3D. The match was broadcasted live on television around the world and also at cinemas in Barcelona. It was the first time that an international event of this importance was produced live in 3D. 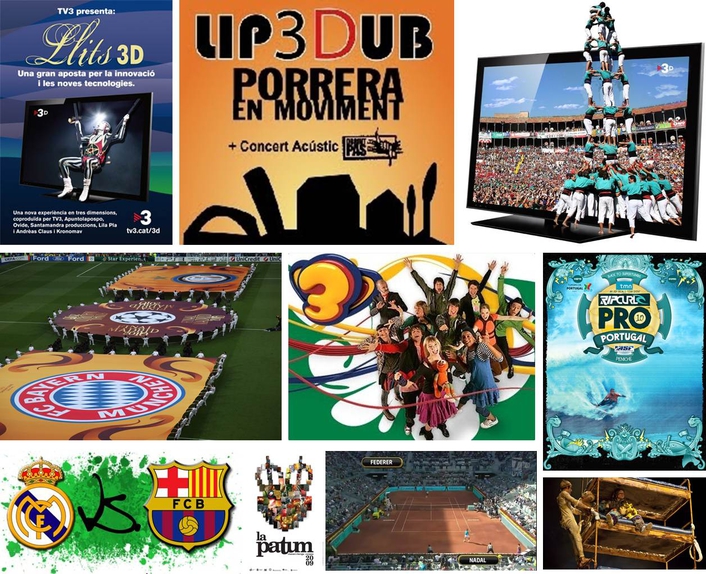 For Televisió de Catalunya TV3 produced and recorded the Tarragona human towers contest in 3D. The 3D signal could be seen live on a screen outside the square where the contest was taking place. The event was also broadcasted in 3D on TV3 – in total it was a 4 hour live broadcast in 3D.

TV3 recorded and post-produced the first “lipdub3D” program in the village of Porrera with the music band “Obrint Pas”. Also some events of the Patum of Berga festival were recorded in 3D. TV3 has also produced the musical Geronimo Stilton in 3D. It was screened at the Dogville 3D Film Festival, the first international 3D short film festival, which took place in Viladecans. Currently TV3 is post-producing the materials for the marketing of the film in 3D and 2D. Geronimo Stilton will be presented in cinemas and on television.

In 2011, TV3 has co-produced the UEFA Champions League semifinal matches between Real Madrid and FC Barcelona in 3D. The matches were broadcasted live across the world and shown at some cinemas in Barcelona. The matches will be reissued shortly in 3D on TV3HD.

Currently TV3 has started to shoot documentaries in 3D with the prestigious team of TV3’s documentary program “30minuts”. Also “work in progress” is the post-production of the documentary film "Enxaneta" based on images recorded at the Tarragona human tower competition. Another current project of TV3 is the 3D production "Roca Catalana”, a film about extreme climbing, to be released in cinemas and on TV.