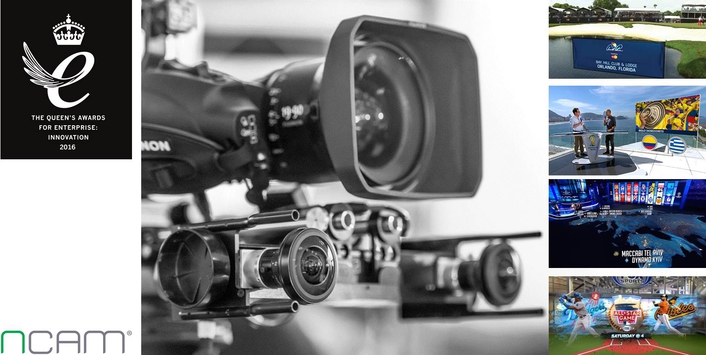 Ncam, the innovative developer of augmented reality solutions, today announced that it has been awarded the Queen’s Award for Enterprise in the Innovation category for its work in technology for film and television.

The Queen’s Awards for Enterprise is the UK’s highest accolade for business success. The Innovation Award recognises Ncam’s contribution to augmented reality, the addition of computer-generated (CG) elements into an otherwise “real” picture in film or television.

To achieve the illusion that the CG elements are actually in the scene, you have to know precisely where the camera is and what it is seeing at all times. There needs to be a continuous stream of data which identifies the position of the camera in three dimensional space. The processor also needs to know the lens settings: focal length, zoom and aperture.

“We’re thrilled that our unique technology has been recognised with this prestigious award,” said Nic Hatch, CEO of Ncam. “Previous attempts to develop tracking systems for cameras have been impractical because they took too long to calibrate and set up and because the systems tend to drift, causing more time lost in re-calibration. Time is money on a film set; time is unavailable in a live broadcast.”

Ncam’s technology was driven by this very desire for a camera tracking system that takes minimal set-up time or re-calibration, and which delivers a continuous stream of precise camera location data, even when the camera is handheld.

The unique and remarkable innovation that makes Ncam such a powerful solution is in its detection system. It uses a combination of multiple sensors, which mount to the camera. The sensor bar is light in weight and unobtrusive, and it means that Ncam can be fitted to any camera, and on any mount, even on a Steadicam or handheld.

The technology is unique and is already being taken up by leading movie-makers and broadcasters across the world. Ncam is currently developing its technology solution by combining its camera tracking with new relighting and depth technology, delivering photorealistic augmented reality.

About Queen’s Awards
249 Queen’s Awards (QA) have been announced this year for outstanding business achievement in the fields of International Trade, Innovation and Sustainable Development. Winners of The Queen’s Awards can expect an invitation to attend a special reception at Buckingham Palace. QA winners can also use The Queen’s Award Emblem in advertising, marketing and on packaging for a period of five years as a symbol of their quality and success. The awards are made annually by HM The Queen and are only given for the highest levels of excellence demonstrated in each category.