While the company owners, Craig Hamel and Nate Marsh, have been involved with the competition for eight years, more recently their company, Girraphic, has taken responsibility for all graphics on the domestic and world feeds, and for big screens around the venues. With this extended remit, Girraphic wanted to create something dynamic and eye-catching.

Girraphic noticed Ncam during its use in the 2014 Superbowl, and started negotiations at NAB that same year. What Ncam delivered was the freedom to roam wherever they wanted, because the tracking system works on objects in the scene so you can take the camera anywhere and it will instantly send precise positional information. 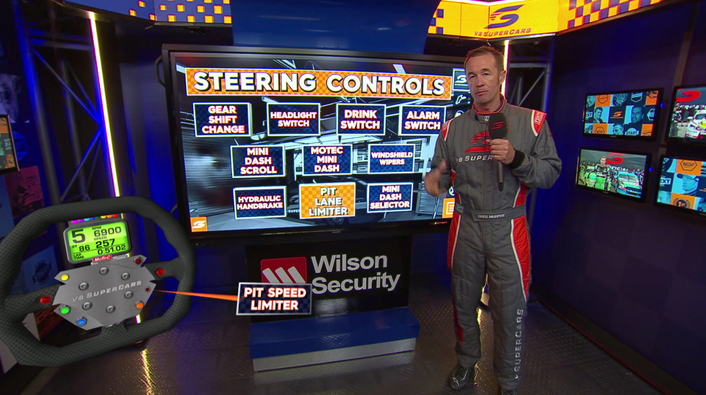 For the V8 Supercars, this has allowed Girraphic unprecedented creative freedom to engage viewers. They even use it to take the viewer inside a virtual car and sit in the driver’s seat.

“We use Ncam all around the race track, on the grid, in the garages or next to the team transporters,” said Nathan Marsh, managing director of Girraphic. “Our producers are always looking for interesting and different places, where a portable car is the only option.

“Ncam has given us the ability to use augmented reality technology where, due to time pressures, we previously could not,” he added. “Setting up traditional camera tracking technology would not be practical as you need to line up the equipment prior to shooting. With Ncam Live 7D we can arrive, shoot the segment and walk away in a matter of minutes, without getting in the way.”

The Ncam solution uses an unobtrusive bar mounted on the camera which carries multiple sensors. It can be mounted on any camera, whether on a tripod, a Steadicam or handheld. The data from the sensors and the lens is streamed to a processor to link to the graphics engine. Although the Ncam processor outputs an open format which can be accessed by any graphics system, the company has a long association with Vizrt, the preferred graphics vendor of Girraphic. This ensures a simple and flawless integration, again eliminating technical issues on a live sports event.

“The team at Girraphic want to push what can be done with Ncam tracking technology, and they are already working it hard, with 360 degree walkarounds and constantly shifting locations,” said Nic Hatch, CEO of Ncam. “What they are doing now on the V8 Supercar coverage is technically and creatively amazing, and we look forward to future projects with them.”