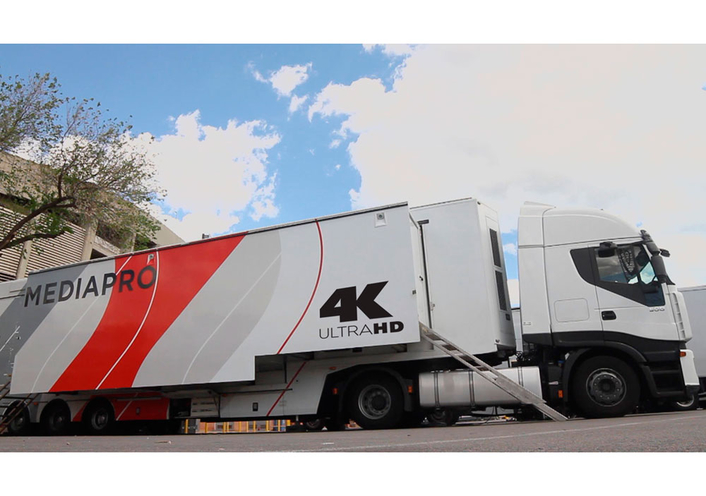 The Mediapro Group is expanding its fleet with the addition of 2 OB vans with 4K technology, along with the purchase of 57 new UHD-4K cameras for the television broadcast of international events. Mediapro currently has 1 4K van, 42 HD vans and 6 SD units and will shortly add two more OB vans set up for ultra-high definition broadcasting. In addition, the Mediapro Argentina division will also acquire an 8-camera 4K broadcast van, a milestone in broadcasting in Argentina.

With the new 4K broadcast vans Mediapro is consolidating its position as a technology benchmark with the possibility of a broadcast quality 4 times better than HD broadcasting. Over the last year, Mediapro has produced a host of football matches from the BBVA League including last season's two Barcelona Madrid matches”. Mediapro Turkey has successfully produced a variety of events in ultra HD 4K, such as the Indoor Athletics Championship in Istanbul, UEFA Europa League and UEFA Champions League games. Outside sports events, highlights include the broadcast of the first ever conference on Ultra HD, “Satellite, Space and Technology Days powered by TURKSAT” as well as the recording of the last two editions of the Mercedes-Benz Fashion Week Madrid. Mediapro has currently reached 4K production agreements in Portugal and Turkey.

Since its creation, Mediapro has always been a leading player in technology investment. It was the first broadcast company to build an HD factory and has carried out a host of 3D productions within the Group it also has a specialised engineering broadcast company, Unitecnic, which is the number one company in the sector, as well as an R&D department which is a direct driver of in-company research.