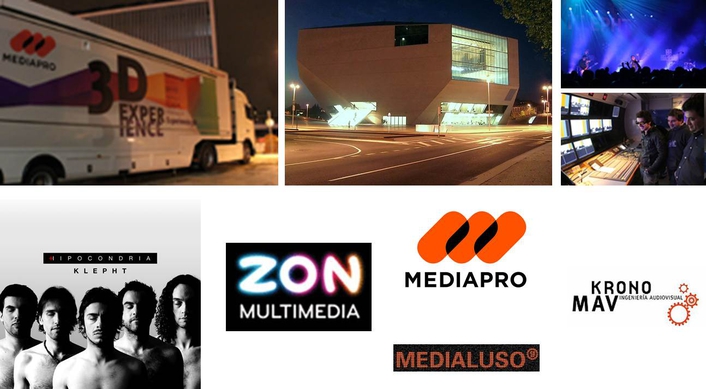 The Portuguese band presented tracks from its latest album, “Hipocondria”, in the Casa da Música in Oporto.

Five 3D camera positions and 3 2D cameras covered the event carried out by MEDIAPRO 3D (formed by Medialuso, Kronomav and MEDIAPRO Research). The event is another step forward towards 3D live productions, a technology in which the MEDIAPRO group is a leading player.

2020 3D Media has as a target to investigate, develop and demonstrate new ways to produce entertainment experiences based on technologies for the capture, production, distribution and exhibition of immersive and three dimensional images and sounds.

Kronomav has developed a revolutionary technology for the HD recording of audio-visual productions in three dimensions. Kronomav has created a robotic platform (Rig) adaptable to any film or television camera. Kronomav’s Rig is the only one in the market that is fully automated. It remotely controls the lenses (zoom, focus, iris), convergence and the separation between cameras. It also memorizes positions (by presets) to facilitate the filming in case the conditions or factors in the scene repeat. Moreover, it also allows to select an axis as master and overpower the rest of the axes in order to make dynamic shootings from the data given by the zoom or focus.