Game, Set and Match: How WTA Coverage Got Served 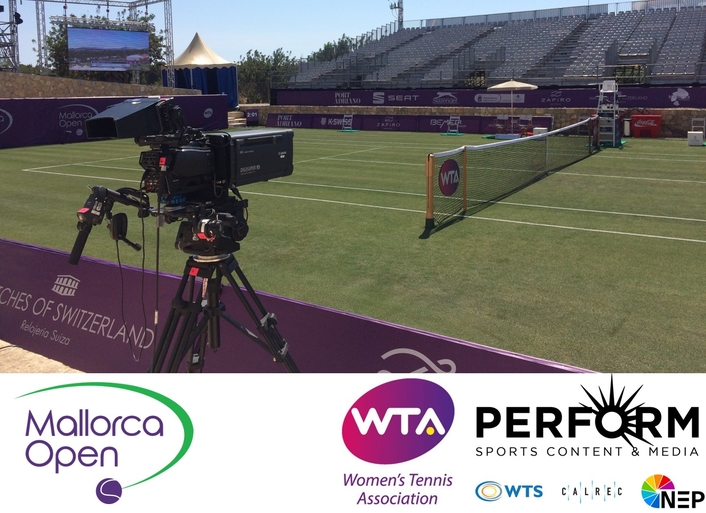 Methods of capture, transportation, protocols, control and even delivery are changing. Disparate hardware elements are becoming no more than nodes on multi-lingual networks, with audio and video equipment sending control, audio and video signals across lightweight fibre cabling.

Backhaul technologies can be on a variety of IP protocols, transmission methods are no longer restricted to traditional media formats, and more powerful technology means that broadcasters can produce big events with smaller, cheaper equipment – all the while maintaining the same high levels of quality.

The Women's Tennis Association (WTA) embodies this force of change. The WTA is the principal organising body of women's professional tennis, and governs the WTA Tour which is made up WTA Premier tournaments, WTA International tournaments, and the year-end WTA Finals

WTA broadcasts are a collaboration between a number of companies, and innovative techniques have been exploited to take advantage of both traditional and newer, flexible transports and protocols. 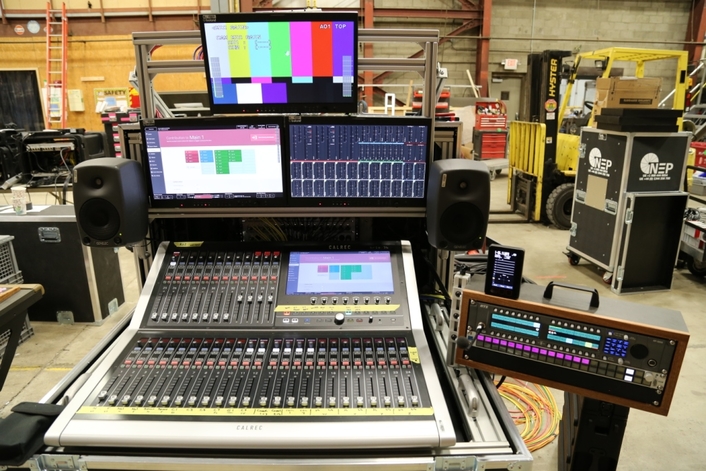 Set-Up of the Calrec Brio

WTA broadcast delivery is managed by the Perform Group, with all remote feeds going through their new playout hub in Bangor, Northern Ireland. Unofficially referred to as “the Netflix of sport,” Perform Group produce, package and distribute content from a wide array of sports and make it available to a range of B2B clients and sports fans across a diverse set of digital and satellite platforms. It would not be unfair to suggest that they are the largest streamer of live sports in the world.

In this way, Perform Group incorporate both traditional broadcast and new media workflows, working closely with rights-holders to generate new revenues. Some of the organisations Perform Group collaborate with include the BBC, Sky, the FA, the Premier League, the WTA, William Hill, UFC and ITV Sport.

Their investment in infrastructure is significant, with the construction of a brand-new production control complex in Bangor, Northern Ireland launched January 1st 2017. Design and installation was undertaken by WTS Broadcast, who have over 20 years of experience supplying equipment to the broadcast industry, with an established broadcast systems integration arm based in Leeds. 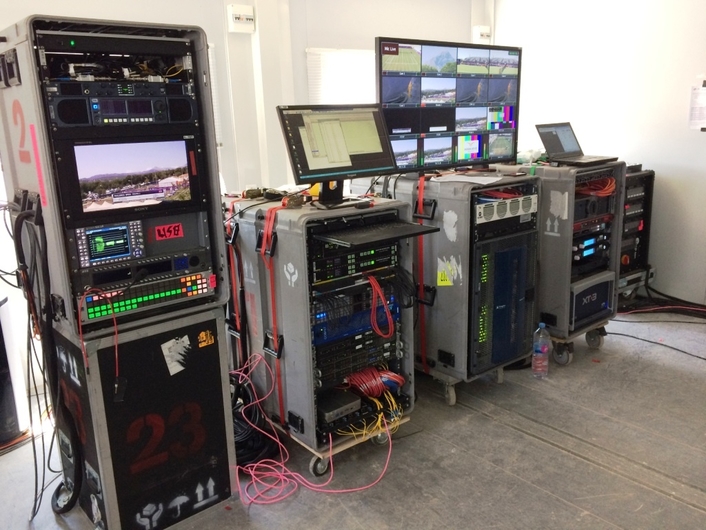 The Perform Group installation in Bangor was built around three compact Calrec Brio consoles, installed in Control 1, 2 and 3. The Brio consoles are used for all live transmission mixing.

“We’ve become something of a specialist for the Brio,” says WTS Systems Manager Jon Lyth. “In fact, WTS has installed more Brio consoles than any other single integrator or dealer in the world, and we installed the first ever Brio to go live in a small OB Van in the UK back in July 2016.”

Which is just as well, as the Perform Group WTA project presented some interesting requirements.

Firstly, commentary was to be added off tube rather than at the venue. While this is not unusual, the commentary location is in West London, and the control facility is in Bangor, while venues ranges across all continents and across multiple frame rates. 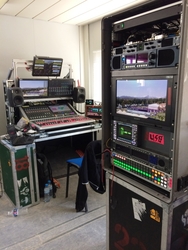 Secondly, each tournament can utilise up to 11 courts, and there can be up to three concurrent tournaments, each with their own feed.

Lastly, this needed to be achieved with only two operators per tournament.

“We had just completed the first two Brio installations in more traditional environments; one in an eight camera outside broadcast, and the other in an educational facility. We realised Calrec had produced a broadcast solution we could use in place of something that historically would have been a re-purposed music console,” says Jon.

“Coverage from each court consists of four input channels which are sent to the transmission console in Bangor which produces a new stereo main program (PGM) feed. This is made up of clean effects from the Brio’s at the venue, and remote commentary which is sent from London over Ravenna IP.

“In Bangor, the commentary feeds are converted to analogue before routing to the Brio – this eradicates any frame rate issues from wherever the matches are being played. Sixteen SDI decoders are presented via the input demuxes built into Ross Ultrix routers which pass the clean effects from each venue via Madi to the Brios”.

“Because facilities’ bookings change daily it was important for operators to have the ability to create multiple mixes from any combination of SDI audio (from the venues) or commentary (from London). This is where the intuitiveness of the Brio interface came into its own. The drag and drop GUI provides patching in a single table, and the ability to colour code channels and masters; this means that is it simple to colour code channel and masters to produce clear configurations that instantly stand out, making it much simpler for the Operator. This functionality is way over and above what we had been able to produce in the past for this level of investment.”

At the other end of the production chain, NEP won the contract for every WTA tournament with Perform Group as host broadcaster, and custom-designed three modular HD flypacks to cover every single match. Each flypack is also built around the Brio console.

Simon Crofts is NEP’s Sound Guarantee Engineer for broadcast. Extremely well qualified, Simon has been involved in the setup and management of WTA coverage from the outset – in fact, he was a Senior Broadcast Engineer at the Perform Group prior to taking the role at NEP. 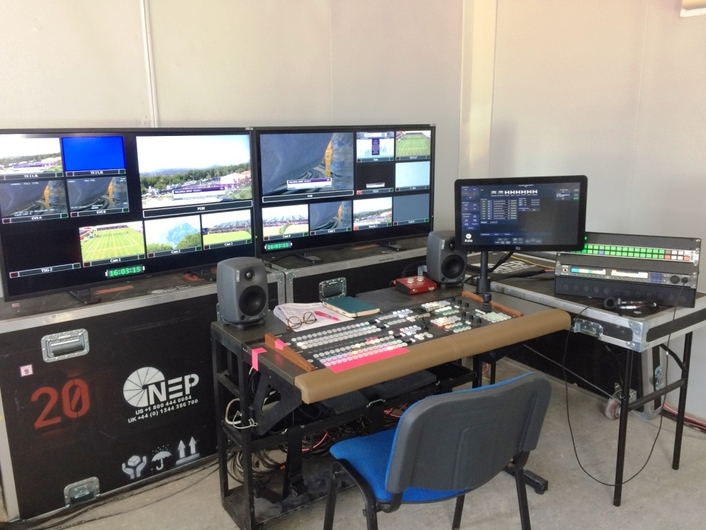 “We use flypacks for most of the WTA tournaments – they are highly portable, and very flexible,” says Simon. “We typically have two full flypacks for centre court coverage, and a half-size flypack which we use as an add on to a full kit when we cover centre court and court one. The outer courts are usually covered by Sony’s Hawkeye Smart Production systems.

“The flypacks were designed and built by NEP in the USA, with the first deployment at WTA Shenzhen on 1st January 2017. They have been designed with the WTA project in mind and fit operationally within two porta-cabins. This works with the facilities provided at many of the venues – typically there will be two porta cabins available; one for production and one for engineering. 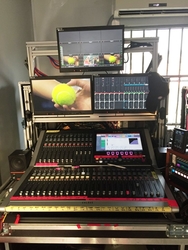 “While video coverage can range from four cameras upwards to 16 or 20 depending on the tournament, the audio plan is essentially the same every time. We will normally place 10-12 court mics, a couple of camera top FX mics, stereo mics for crowd FX, an Umpire mic and radio mics for each coach (in case they go on court during play). Presentation and pre/post-match interviews are often performed using a mix of our systems or local PA microphones from which we take a feed.

“The half kit consists of a 2nd sound desk, 2nd vision switcher, 2nd or 3rd replay station, and additional cameras and camera racking positions. The half kit connects to and shares the router, glue and comms matrix of the main kit, so it’s configured as an add on.

“The main infrastructure for the flypack revolves around HD/SDI video with embedded audio, MADI and Dante, with very little AES or analogue audio except for the court microphones. We extend the flypack’s IP network outwards from the cabin via multicore fibre allowing us to pick up audio feeds via Dante from around the venue, position RTS Omneo comms panels and Dante belt packs inside the stadium and on the court, and also provide a dual commentary position should there be a requirement using our Dante commentator units. 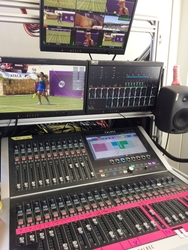 “On the court we use a 24/8 analogue Calrec Hydra2 stage box to process all on-court microphones, radio mics and venue PA feeds. This unit sits courtside in a rolling rack along with Grass Valley SHED HDXs to help us connect the cameras to the cabin.

“As with all flypacks the cost of shipping is a huge factor, and trying to reduce the weight and size of the kit was a big part of the design. Using multicore single-mode fibre means we can connect everything we need in the stadium (microphones, audio feeds, cameras, comms panels, commentary and other IP devices such as router control panels or robotic cameras) using just three or four lightweight fibre cables. We have dispensed entirely with heavy audio multi cable and excessive lengths of camera SMPTE cable, and rig and derig easier and faster.”

Like the Production Control Complex in Bangor, flexibility is key in the design and implementation of the NEP’s flypack system.

“Each main kit consists of an Imagine IP3 embedding/de-embedding router with MADI and analogue audio IO along with multiviewer cards. In fact, this is the hub for all signals,” adds Simon. “We use VSM for routing control, GPIO processing and monitoring of the devices, and we use a Focusrite D64R 64-Channel MADI / Dante Bridge to bridge between MADI and Dante Networks.

“We use a Brio sound console to mix all the feeds for clean effects, with commentary usually added offsite (see above). The Brio has two MADI cards for connection to the router and RTS comms frame, and a Dante card for access to the Dante network. The court mics, group faders, grams, replay channels and masters use up around 28 faders on the Brio.

“An RTS Adam-M frame provides all the communications onsite, and having MADI, Dante and analogue connections results in a really flexible system. We have multiple paths to route signals around the network, all of our RTS comms panels are Omneo/Dante capable and for any devices that aren’t Dante capable (such as the camera CCUs) we use Rednet A16R devices to get them onto the Dante network.” 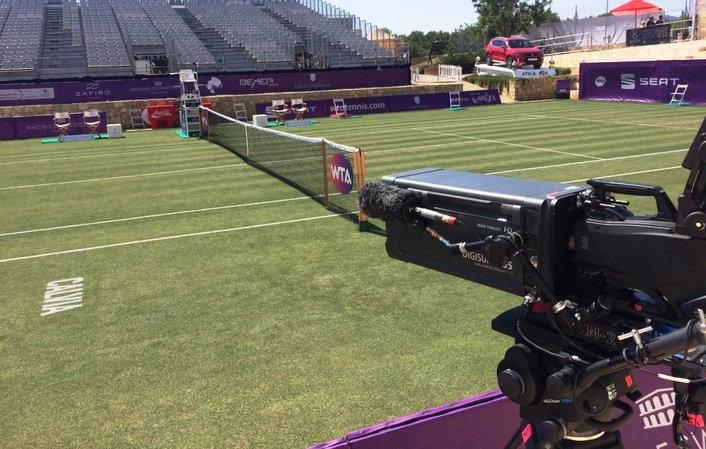 A halfway house between traditional Outside Broadcast and Remote Productions, Perform Group’s WTA coverage is lightweight, agile and innovative, where a clear approach to utilise new technologies is paying dividends in all areas from capture through to transmission.