Calrec Is Number One With TV2 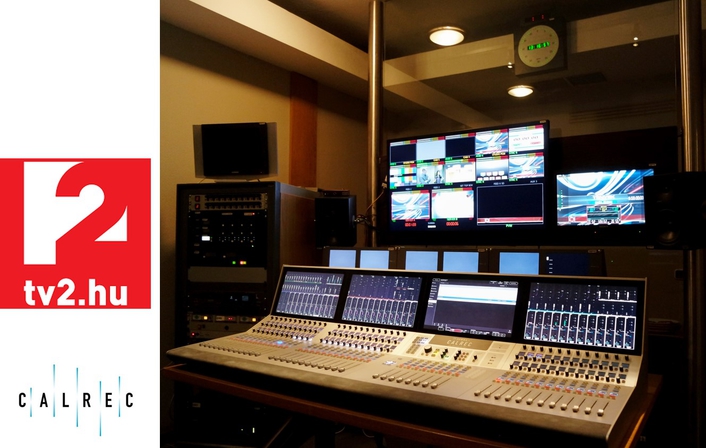 A powerful combination of Calrec's Summa and Artemis Light consoles has future-proofed two studios at TV2, one of Hungary's most popular commercial television channels. These purchases make TV2 Hungary Calrec's most prominent customer in the burgeoning Hungarian broadcast market.

"As our programming lineup continues to grow in both size and complexity, Calrec is our ideal technology partner, offering the flexible and highly robust audio mixing solutions we need to power our operation into the future," said Adam Somodi, sound engineer, TV2 Hungary. "With the Artemis and Summa desks, we're much better equipped to handle our largest productions.

"Calrec gave us a huge advantage by allowing us to test the equipment for mixing and recording in a live production situation, running in parallel with our old console, and we saw a large improvement right away. Not only do the Artemis and Summa offer an outstanding feature set and fantastic sound — the most important factor — but they do it all at an excellent price point."

As one of Hungary's most-watched channels, TV2 offers a large variety of popular programs to viewers throughout Hungary and some areas of Romania. The 128-channel Summa and Artemis Light are both installed in TV2 Hungary's main broadcast centre in Budapest. The Summa is used in the news and morning program studio, and the Artemis Light supports production of high-visibility musical programs in TV2's largest studio.

A Calrec modular card on the Artemis Light allows seamless integration with SoundGrid's Waves series of audio plug-ins and gives engineers expanded capabilities for the music productions. This, combined with the ability to record all channels via MADI and replay audio, provides support for postproduction.

"Since the Artemis Light and Summa sit on the same Calrec Hydra2 network, we're able to share inputs and outputs between the two studios — a huge plus," Somodi said. "Engineers are able to speed up the workflow and recall their own saved settings quickly and easily, on either desk. The Waves plug-ins on the Artemis give us greater capacity and more flexibility than ever before to mix many more types of musical shows."

Michael Reddick, Calrec's international sales manager, commented, "TV2's adoption of the Artemis Light and Summa consoles is a huge step forward for Calrec in an exciting new market. By upgrading to Calrec, TV2 is able to handle a greater volume and greater variety of programs to meet the ever-expanding demands of its viewers and boost its competitive advantage."