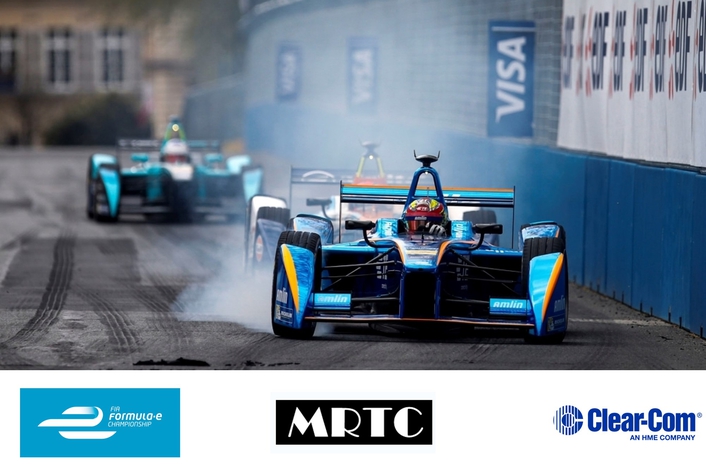 Petrol heads may still see it as sacrilege, but after two successful seasons Formula E, the racing championship for electric cars, has proved popular and is making people look at motor sports in a different way. New technology is also playing a major role behind the scenes, providing the vital communications link not only between the team engineers and their drivers but also allowing televisions viewers to hear the instructions being given and enabling commentators to interact with the racers.

This greater interactivity comes through IP-based intercoms developed and manufactured by Clear-Com and supplied by specialist comms company MRTC. During the 2015-16 season of what is formally known as the FIA (Fédération Internationale de l'Automobile) Formula E Championship, which had its finale at Battersea Park in London on 2 and 3 July 2016, MRTC installed Clear-Com systems into 58 of the 60 cars taking part.

MRTC (Midlands Radio Telephone Centre) was founded in 1979, initially supplying comms equipment for rallying. From there the company began working on the Le Mans 24-hour race, the most recent staging of which was during June, and then Formula 1 Grand Prix. Communications have become an important part of all motor sports, enabling the team bosses and engineers to talk to the drivers, giving them instructions and information about how the car is handling and what is going on in the race.

Because of the immediacy of this situation, says MRTC director Ken Rumbold, any intercom system has to provide stable links all the time, as there is no room for error. "On the broadcasting side, with intercoms between the trucks, camera operators and the production team, there are options for back-ups and duplication of systems," he explains. "But what we are doing is mission critical. Live events like this do not take any prisoners because there is only a single point of failure." 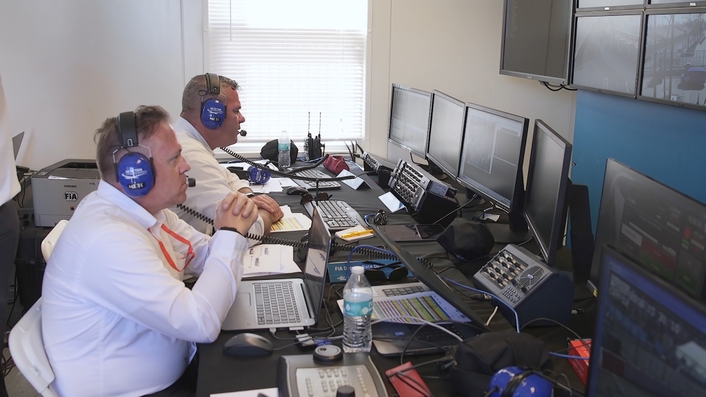 MRTC has been using Clear-Com systems for the last seven years, partly because they incorporate the latest technologies, including IP and other computer-industry techniques, but also for the reliability that they offer. "Clear-Com was ahead of its time by using IT connectivity quite early on," Rumbold says. "We first used its products on Formula 1 and now as a company we are involved in most motor racing series round the world using those systems."

As well as F1 and now Formula E, these include British Touring Cars and Le Mans, which Rumbold says uses "a hell of a lot of Clear-Com". MRTC offers different sizes of Clear-Com's Eclipse digital matrix systems, allowing it to build simple systems based on the 64-port Delta frame up to more extensive networks using the 460-port Omega series. "We use Omega systems for Formula E, with all connectivity over IP," Rumbold comments. "One of the advantages of this is that we don't have to worry about cabling or cumbersome add-ons."

As a leading supplier of communications equipment and technology for the motor racing market, MRTC is in the position of potential clients approaching the company with specific requirements for a particular project. "People come to us to produce solutions," Rumbold says. "A lot of customers tell us what they need, and because we work on many racing events we know the issues, which means we are able to make suggestions. We are advisers as much as suppliers of the products we use, and we work closely with our customers, often adjusting the budget to fit what they need and what they can afford." 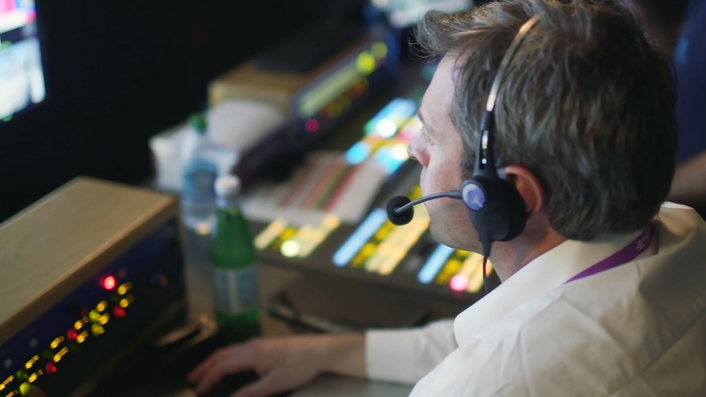 Over the last 25 years TV sports production has embraced technology to bring viewers closer to the action; miniature and other specialist cameras now offer different angles that give everyone more of an insight into the game and what is happening. The ability to hear snatches of conversation over team radios in F1 and other motor sports has done something similar on the audio side.

While this is now a firm part of racing, people are always on the look-out for ways to push the concept. "It is the way the market is going," Rumbold acknowledges. "The race teams like the intercom idea and are even using it when they have meetings in offices near the track. The teams usually have adjoining rooms and the walls are thin, so using headsets means they can discuss tactics and other sensitive issues without being overheard."

The host broadcast coverage of Formula E also set out to use communications technology to its fullest from the start, not just on live TV but also for the sport's web site and mobile apps. "It's now been pushed to the point where the team radio for TV is truly live," Rumbold explains. "The material in F1 is somewhat sanitised, because it is recorded and then put on air two to three minutes later. But for Formula E it is mandatory in the regulations that audio is presented to race control and TV to do with as they wish. That means there can be an incident, such as a crash, and the drivers involved are able to put over their sides of the story immediately." 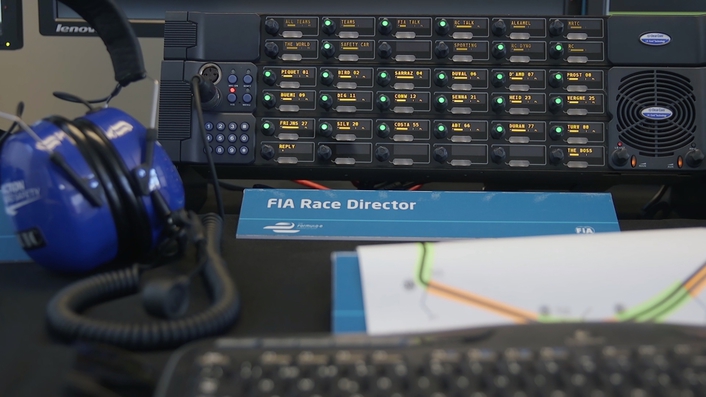 The team radio connections run from the engineering positions in the garages to the cars over a 5GHz wireless data transmission network. The signals carry both voice and telemetry, readings of the car's engine and electronics systems that are interpreted by the engineers to fine tune the systems for subsequent races. The radio transmissions are then connected back to race control and also made available to the broadcasters.

"All the comms come back from the car as four-wire intercom signals over data links," Rumbold says. "That audio can then be distributed wherever it is needed, including TV, the web site and apps." Another difference from the team radio familiar on F1 coverage is that the commentators for Formula E host broadcasts are also able to talk to the drivers while the race is on. "They've got direct access to the cars," Rumbold adds. "Because the commentators are professionals and the expert alongside them is an ex-driver they know when not to interrupt people at certain points in the race."

The car intercom interfaces with another Clear-Com system being used by the host broadcaster, with the two matrices talking to each other. But, explains Rumbold, the MRTC installation is able to extend even further than the race compound and broadcast facilities: "Because it is truly IT-based we can manage the data and send it wherever we or the clients want. For one Formula E meet, a race controller couldn't get to the track so we set up an intercom panel in his house." 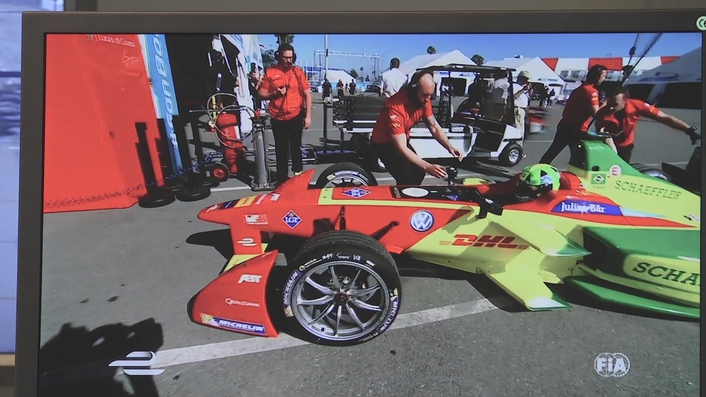 This kind of expandability and flexibility is possible, Rumbold says, because the Clear-Com system works on a plug-and-play basis, with the potential to connect to any network. This facility is also available to the teams, which are able to link the manufacturer's factory with the engineers and drivers. "We can connect over the internet or create VLANs [virtual local area networks] with varying levels of security," he explains. "We use a lot of MPLS [multi-protocol label switching] connections to carry the data, which allows us to select how many people can speak directly to a car or other destinations." 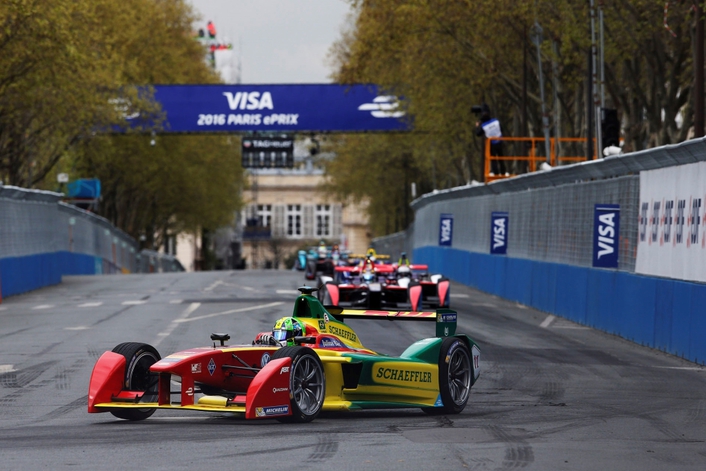 By using IP connections and widely available networks, it is possible to link up between sites many thousands of miles apart. This potential has been used during the 24 Hours of Daytona endurance race in Florida. A team wanted to connect its premises in Germany to the race track, so panels were installed in Southern Germany and Florida, connecting via a Clear-Com matrix in MRTC's offices in England.

The possibility to add more capacity to the intercom system clearly appeals in a sport known for its technological excesses. During the 24-hour race at Le Mans some teams had more than 200 engineers and mechanics to work on just two cars, with each person having radio equipment and access to intercom panels. The London finale of the Formula E season saw the number of panels rise from 50 to 60 for the two-day event. Quite a modest increase but it is still early days for both this new class of motor racing and IP-based comms.