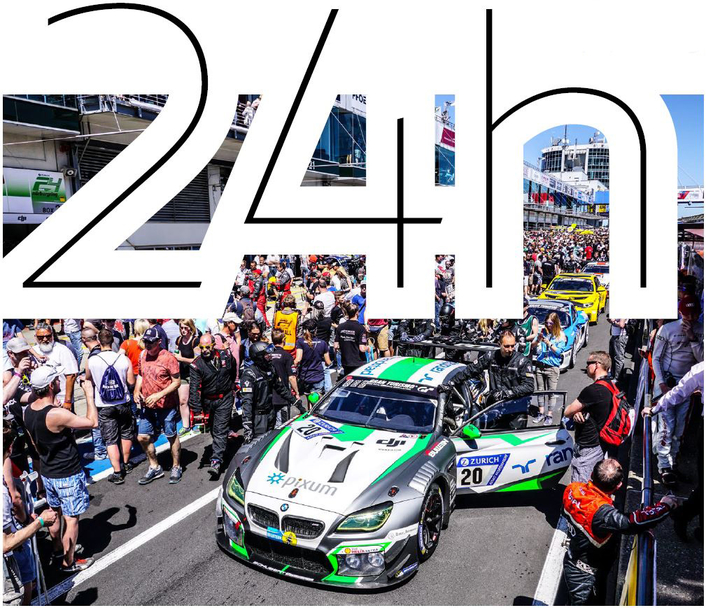 Every year on a weekend in May over 150 cars will race the ADAC Zurich 24h of Nürburgring on the combined Nordschleife and Grand Prix track. Cars range from the SP9 GT3 class (from which the winner is expected), to a humble Golf GTI and an Opel Manta. The top cars the past couple of years have been Porsche 911 variants, the Audi R8, Mercedes SLS, and BMW Z4. New this year was the Bentley Continental, with two cars from Bentley Motorsport. Notably absent is the McLaren 12c, which qualified well last year but failed to finish due to reliability and accidents this year.

The ADAC Zurich team created the perfect setting for the race, which every year draws over 200,000 enthusiastic fans to the “Green Hell”, with sponsorship packages, hospitality facilities, on-site corporate events, and much more. 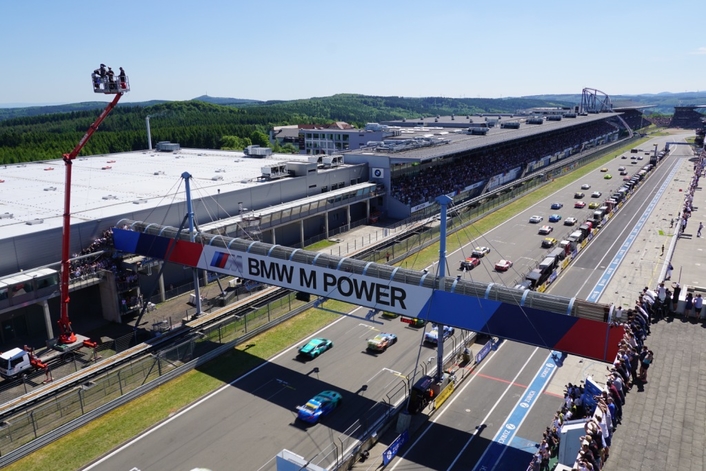 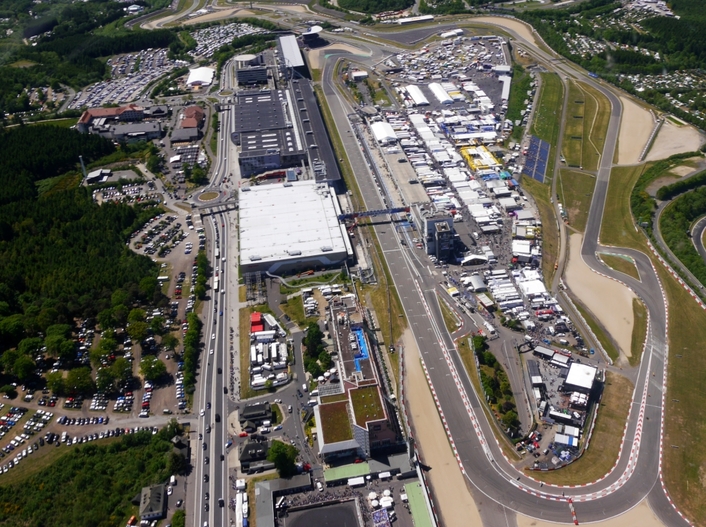 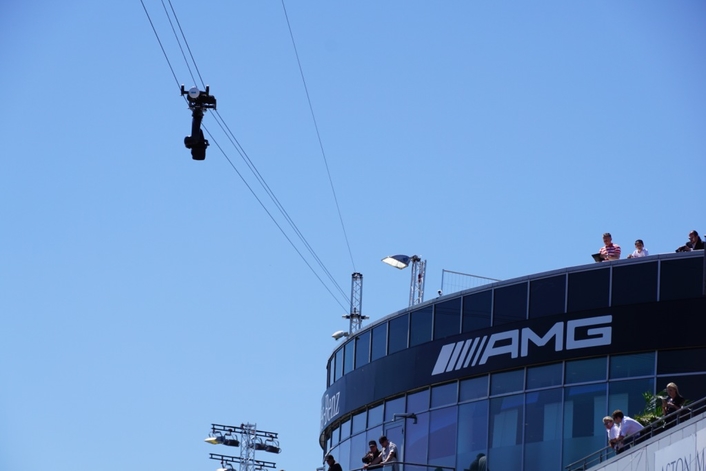 TV Skyline’s fundamental and ongoing task as the host broadcaster was to continue the expansion and development of the internationally renowned motor racing spectacle, staged for the 45th time in 2017. Alongside a number of firsts in the TV production operation was the integration of 10 onboard cameras, three live drones, a 260m long cable camera and fully updated TV graphics. The timing service this year incorporated four split times for the first time. Motorsport fans were kept up to speed with all relevant live timing and lap time data at https://livetiming.tracktime.info/nurburgring, a site featuring a highly attractive and premium design. 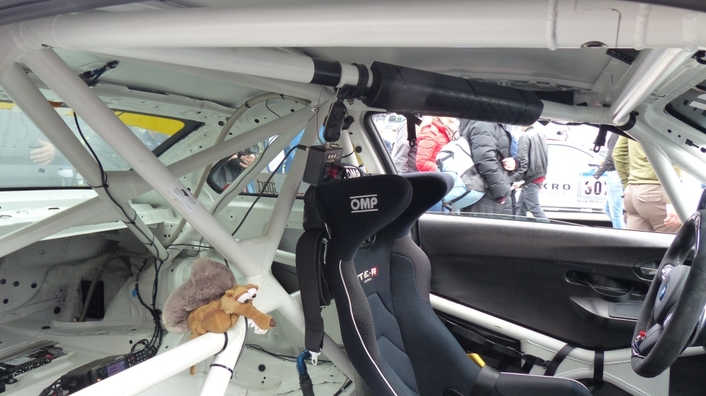 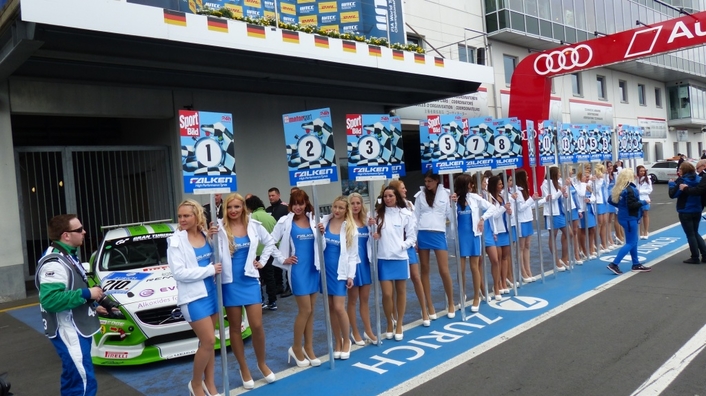 For the production of the internationales feed TV Skyline installed more than 100 km of cable to connect the 33 cameras on the track with the broadcast compound. In addition to the 260m long cable camera running above the start/finish track and the pit lane five 40m high camera platforms were established on motorised steiger around the race course to provide best of bread images.
Finally these camera signals were supported by a Helicam which TV Skyline has hired in from HD Skycam. The Helicoper was in the air more than 16h and delivered some of the stunning images of the overhaul manoeuvres. 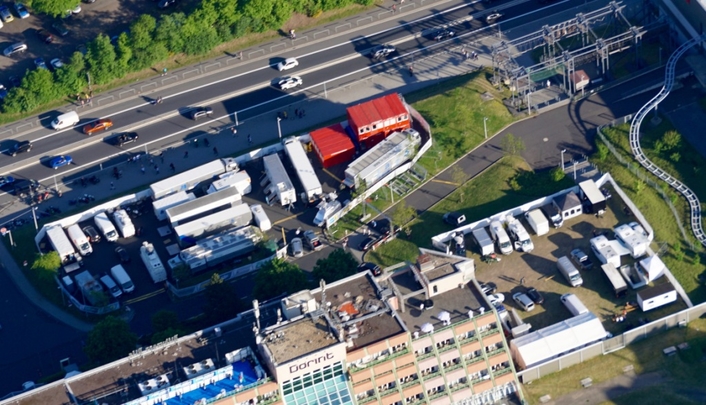 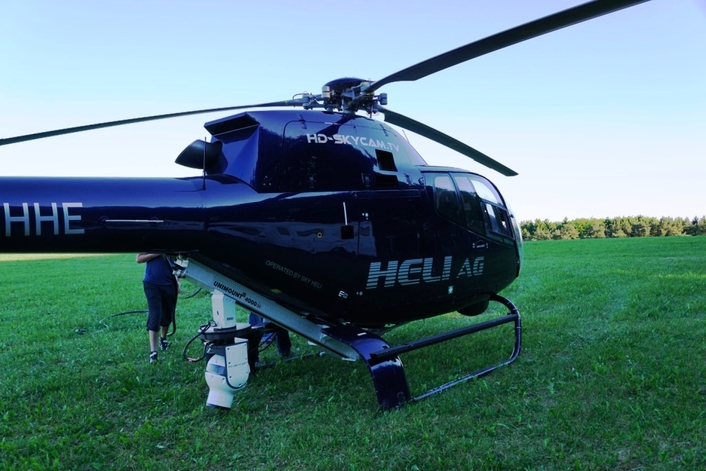 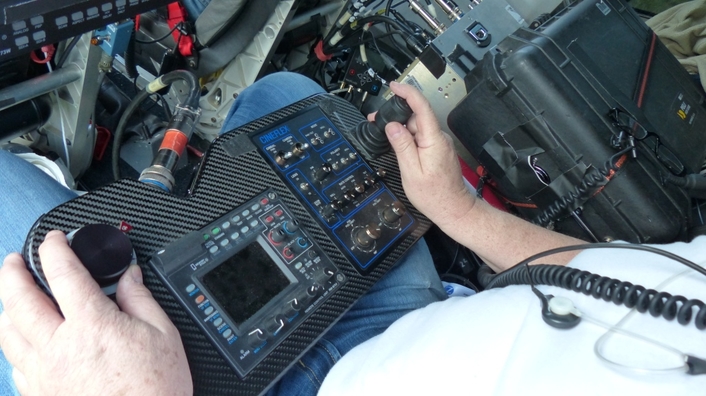 In the pit lane three wireless cameras captured the action also during the night hours. The camera signals were supported by 106 shotgun microphones around the 25,3km long track. All camera and audio signals were received at the main OB truck, TV Skylines Ü8, which was supported by two satellite OBVans managing some of the cameras on the track self-sufficient and delivering signals via fibre cable to the main OB truck Ü8. 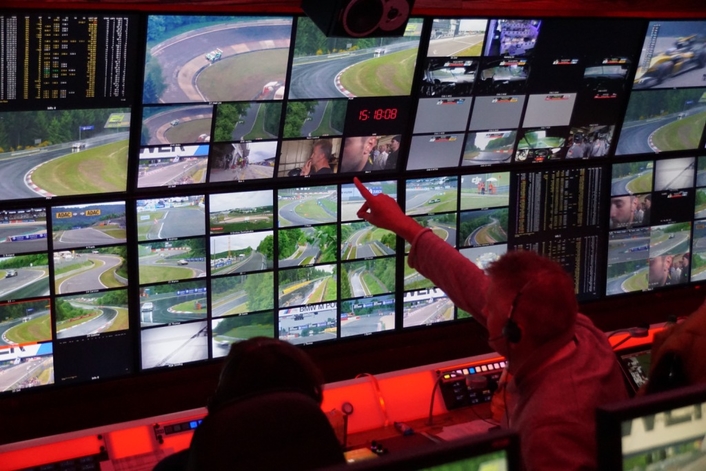 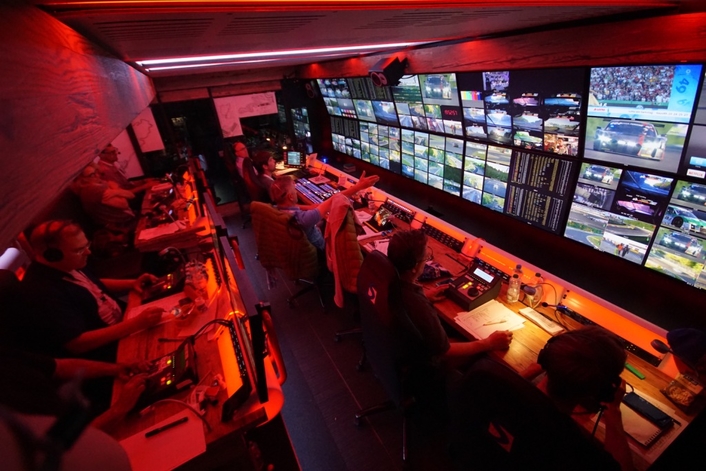 TV Skylines Ü8 also received the signals from the 10 onboard cameras and integrated the live signals from the three drones including intercom via separate stage boxes. A separate slomo production with access to all camera signals completed the setup.

About 220 technicians, camera operators, slomo and highlight editors, directors and production staff were on duty in a 3-shift operation during the weekend. A separate installation crew was on duty since Monday before the race weekend installing the camera platforms and laying out the 100km of cable.

In addition to the production of the international feed TV Skyline’s Ü8 realised with its second production area the feed for Eurosport including a separate highlight edit and race summery as well as two commentator positions. 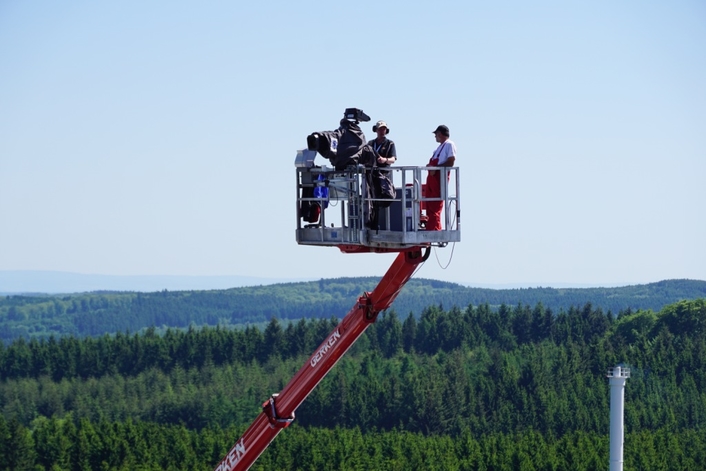 Also the RTL Nitro feed was provided by TV Skyline by the use of the _wige HD ONE truck. This was a national TV program, allowing motorsport fans to follow the event live for more than 26 hours and enjoy the thrills on the racetrack continuously.

With a live-cast of 26h and 20min RTL NITRO set a new world record for the longest live transmission. This was 30min more than the world record RTL NITRO had set up in 2016 at the 24h at the Nürburgring. 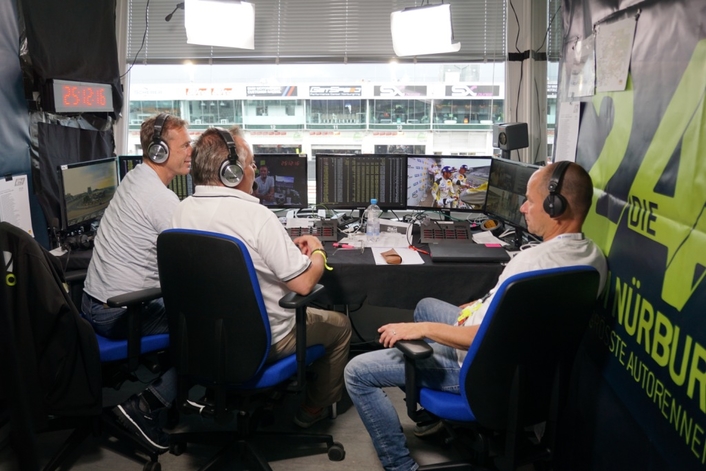 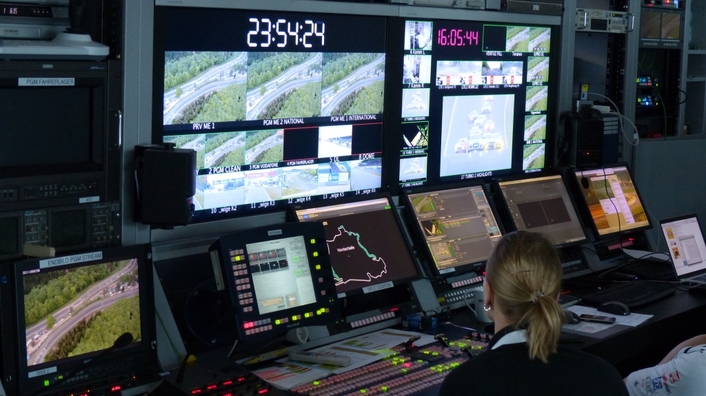 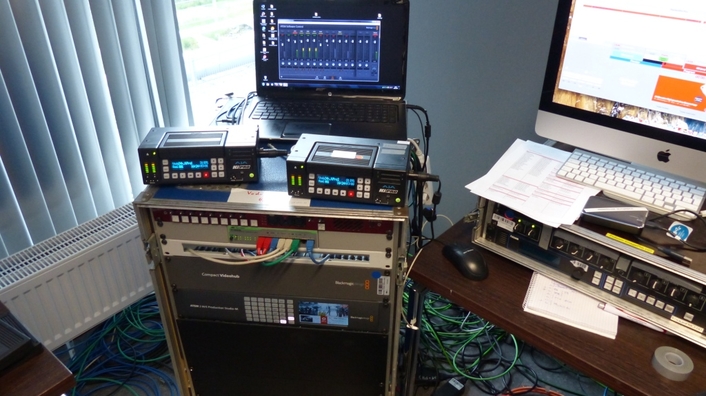 3x networked non-linear editing desks in combination with the EVS in the OB truck.

Wireless microphones for two commentators in the pit lane. 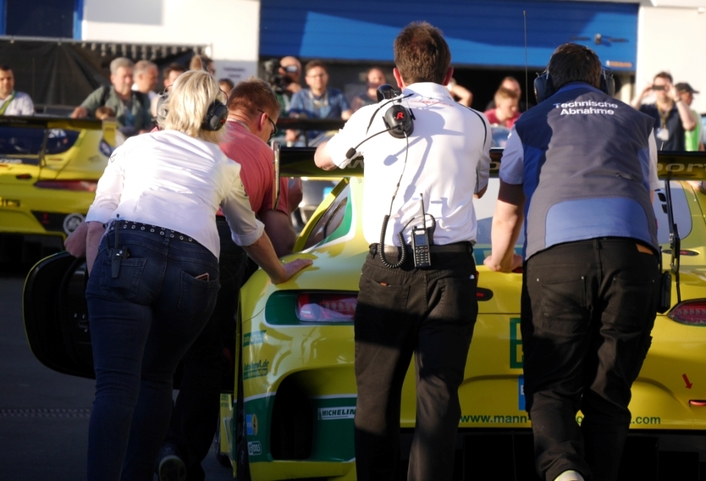 In parallel a 4G|LTE livestream for Vodafone was provided, allowing motorsport fans all over the world to follow the event for more than 26 hours and enjoy the thrills of the racetrack directly on their personal mobile devices.

To deliver the ambitious project, Vodafone installed its own LTE transmitter masts all around the world’s longest circuit. Aided by four LTE onboard cameras, an LTE flying drone and Stress Level Monitoring by Get-Speed, a service already proven in the VLN endurance series, fans enjoyed fascinating live footage from the cars on the track. Well-known presenters and six professional motorsport commentators explained and illuminated the event for German and English-speaking viewers.

A total of 1.4 million people accessed the Vodafone Youtube channel to follow the event live from home and at trackside.

And the Winner is …

Fourth victory in five calendar years: After 2012, 2014 and 2015, the overall victory in 2017 once again went to the Audi R8 LMS. This makes the race car from Audi Sport customer racing the most successful sports car since 2012, at which time the GT3 models first started battling it out for the overall race win in the Eifel. 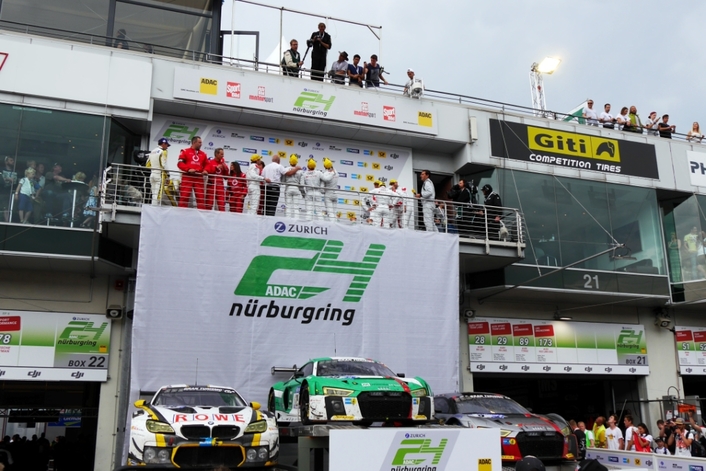