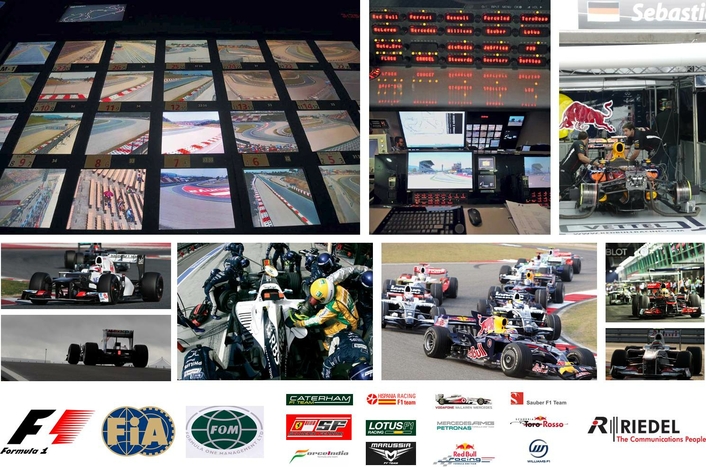 Riedel provides the communications infrastructure for some of the largest international sports and entertainment events in the world including the Olympics, the FIFA World Cup, the UEFA Euro, the Eurovision Song Contest, the Tour de France and the Formula 1. As well as supplying thousands of radios and intercom stations to allow the events personnel to communicate with each other, Riedel also provides some of the facilities for transmitting video and audio for broadcast.

In particular Motorsport events make demands on a rental business like no other. The high stress on personnel and equipment, combined with absolute zero-failure tolerance in communications places Motorsport in a class of its own. Riedel's involvement in Formula 1 began in 1993. Now, 19 years later, Riedel is responsible for the communications infrastructure at all 20 races worldwide, and equips all twelve Formula 1 racing teams, as well as the FOM and the FIA.

Beyond intercom, Riedel has also established secure WAN MPLS data services, providing point-to-point connections for the team from the circuit to the team’s base office. These services are used for audio/video/data transmission as well as VoIP-based voice communications. In addition to this quite demanding infrastructure , Riedel provides other services and products for Motorsport, such as wireless HD on-board camera solutions for the race cars, CCTV recordings of park ferme as well as RiDAR (Race Incident Detection and Review System) to enable race control to view controversial situations from different camera angles.

Intercom – RiFACE: all twelve Formula One teams work with Riedel

The geographically diverse Grand Prix races occur from the beginning of March to the end of November and take place on five continents. The varied climates of the locations and difficult transport conditions require a robust communications system able to function at its optimum level in severe weather conditions — rain, extreme heat, cold and humidity.

Riedel’s Artist Intercom matrix has been adopted by FIA, FOM and the Formula 1 teams as the standard communication platform at all 20 Formula 1 World Championship races. It is used to connect FIA stewards, the Safty Car, the Medical Car, the pit crews and the drivers.

The seamless integration of wired and wireless systems, the securing of 100 per cent tap-proofness and the networking of various team structures require extensive experience in the system planning of high-quality equipment. Riedel’s Artist digital matrix intercom platform provides this maximum on flexibility and reliability. The tight relationship of Riedel’s rental business with Riedel’s manufacturing department places the company in the unique position to furnish customised systems directly from the factory. Looking into Formula 1 team communications, a typical intercom system incorporates two to four Artist nodes, which are connected over a redundant fiber ring to form one non-blocking matrix. Communication between team and driver is – of course – wireless. An especially developed intercom interface, which is geared to work even under the extreme F1 racing conditions, allows for pristine communication between the drivers and the teams.

One Artist node is placed in a weather proof rack in each pit with at least one panel connected to each node. Additionally, the teams’ internal radio signals are switched into these nodes. Artist enables the teams to communicate remotely with race control and simultaneously receive information from the race director.

All in all, there are 1,200 Riedel TETRA digital radio handsets in use around the circuit. FOM and FIA typically are utilising around 170 radio receivers each at any given race while the racing teams are using around 100 radio handsets. Riedel also provides its MAX headsets, designed specifically to cope with the explosive noise that characterises an F1 race. Even the drivers can hear clearly despite their proximity to the source of all the noise. 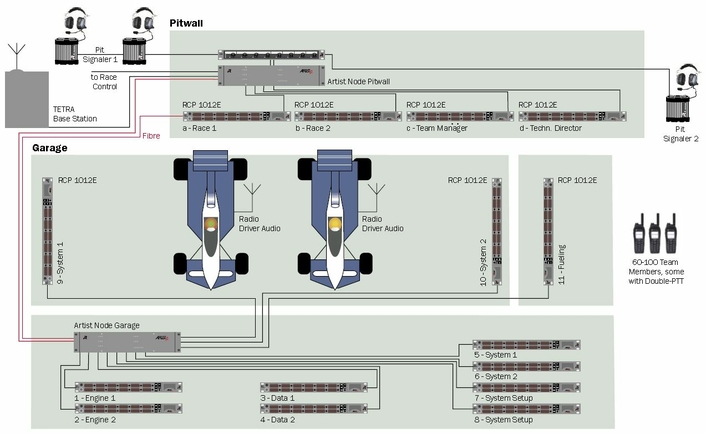 The fully digital TETRA systems work encrypted to ensure that the teams can’t listen to the conversation of the other teams.

Riedel also provides broadcasters with access to each driver's audio link. Each team manager has a button which allows them to switch their team's audio between on-air and off-air. The broadcasters are given the peace of mind that if they are receiving the audio, then they are clear to put it on-air. 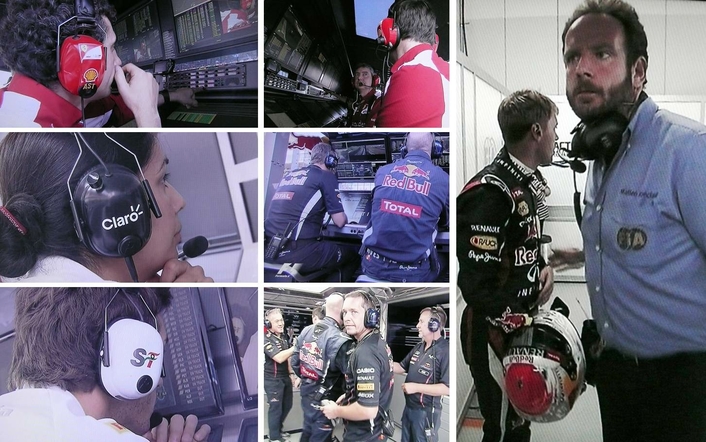 Riedel MAX Headsets in use at Formula 1 Races

RiLink – six of twelve Formula One teams work with Riedel

In addition to the communication on the race circuit the teams require communications links with their factories, most of which are located in the UK, France and Italy. To serve this demand Riedel has setup a secure WAN MPLS (multiprotocol label switching) connection for the teams, directly from the circuit to the mission control in their headquarters. This is monitored 24/7. The service completely bypasses the mainstream internet so there is no fall time and no time waiting to reach a host because, this is a completely dedicated point-to-point connection. Riedel’s RiLink Global Fiber Service provides bidirectional links between the race circuit and the headquarters, allowing not only the transport of 3G/HD/SDSDI broadcast signals, but also return video feeds, full-duplex communications, VoIP telephony and IP data. 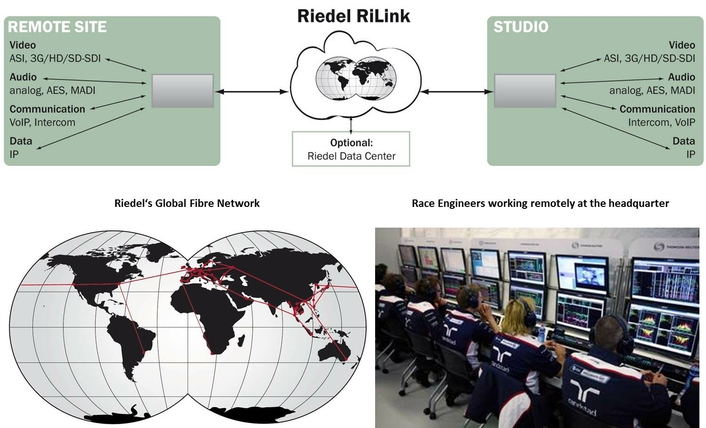 The advantages of RiLink are currently also used by the rights-holding broadcasters Sky Germany, RTL Germany and TV3 Spain – all three broadcasters transfer the international signal and the additional signals from their ENG Teams on location from all the 20 race circuits to their playout centers in Germany or Spain via RiLink.

In addition the Riedel network provides a variety of hosting solutions in its data centers in Frankfurt and Wuppertal that are tailored to meet bespoke and complex solutions such as the storage of all the audio/video/data signals generated during a Formula 1 race weekend but also for all the 20 races year on year. FIA is using the Riedel data center as their document server. This allows simulating every single race from start to finish as long as the data is stored.

Riedel also provides a video recording service for the FIA. Riedel supplies a custom-built carbon fibre race control desk which travels to all 20 F1 Grand Prix races so that the operators know exactly where all the buttons they need are located.  The carbon fibre chassis is designed to cope with the rigorous of the hectic F1 touring schedule, which takes in race locations ranging from Brazil to Canada and Europe to Australia. In the race control, additional communication panels and a hard disk recording system as well as a data logger are connected to the desk. This is Race Control, where FIA personnel and a crew of local circuit officials run the rule over Formula One.

Lit by the glow of 24 television screens and by a battery of computer monitors that spit out lap information and display the position of every car on track everything is monitored and F1’s Big Brother casts an ever watchful and increasingly sophisticated electronic eye over every turn of a wheel. 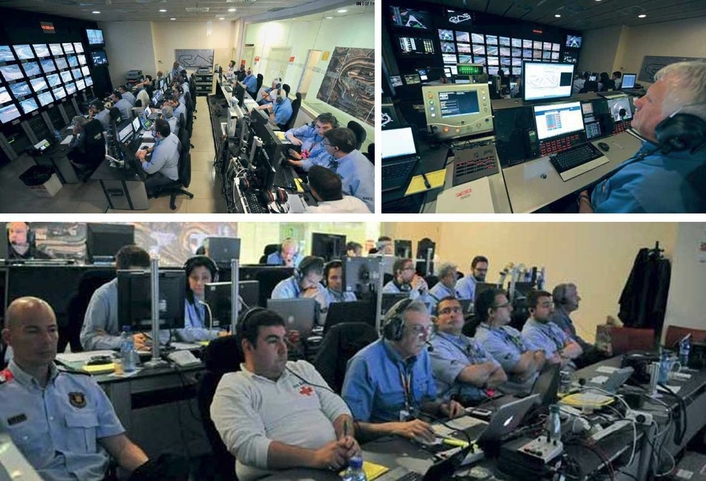 The recorded material (synchronized by time code) is taken from about 40 camera positions around the track but also additional closed circuit cameras providing the race director with full visual coverage of the track. Footage from each camera as well as the audio from the radio links between teams and their drivers is recorded onto a 7TB hard drive system. The race officials at FIA can then re-visit all the events of the race as it happens, enabling them to award any necessary penalties for infringements of the rules as well as to ensure the safety of the drivers. If the race director needs to see something to make a judgment on a situation, he will ask a Riedel operator to pull up a certain incident from a certain angle.

When everything runs smoothly the system is invisible. It is only when there are complicated questions to be examined that the spotlight shines on those involved. With more complicated matters, investigations take place after the race, to allow the teams and drivers to have their say. Race Control deals not only with the teams and the stewards but is prepared for all eventualities. 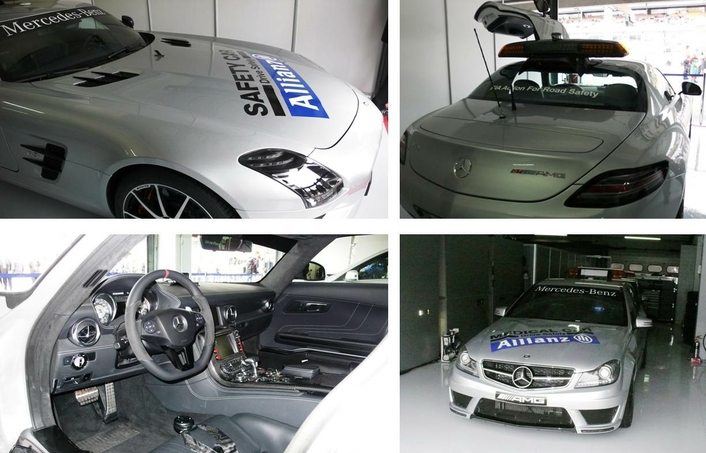 Riedel also has to ensure that nothing fails if the race control has to send out the medical car. This is why Riedel has implemented three separate radio intercoms in the safety and medical cars to make sure they can be reached. As well as the three separate intercoms, each driver also has a regular walkie-talkie handset located inside their car's cockpit. There are two push-to-talk buttons on the dashboard, so in case one fails, the driver has access to another.

Racewatch: The iPad support for the stewards

Racewatch uses real-time data from lap timing, the Global Positioning System, tyre and motor information to look for patterns in car movement. Also the signals from the cameras in the race cars are included. The system works in conjunction with the Riedel RiDAR system used by the FIA to monitor the races. Everyone having the Racewatch software running on his iPad now is able to see where a car exactly is on the track.

The software has been developed since 2008. There are already automatic alerts for speeding under yellow flags, which is hard to spot by eye, and they now come up automatically using the data, but with all of this it is still the race controls decision whether to refer incidents to the Stewards and their decision as to whether the driver is penalised or not.

The wired intercoms employ a special ruggedised fibre cable made specifically for Riedel. If you lay a cable for a permanent installation it is likely to continue working without any assistance. But if you lay a cable, remove it, ship it and re-install it 20 times in a year, it really needs to be heavily ruggedized. In total there is around 8km – 12km of cable weaving around the garages, pit lane and the race official's control room in a fully redundant system, meeting the zero-failure standards expected by Riedel's high-profile clients. This redundant fibre ring is set up by Riedel technicians and is constantly monitored before, during and after a race so that if something fails Riedel can react immediately.

In total, Riedel freights around four tones of communications equipment from venue to venue. A team of 17 Riedel engineers and one super visor are on location to support FIA (five), the Formula 1 racing teams (eight), the Porsche Cup (one), the GP2 Series (one) and to set up the redundant fibre ring (two). This weekend the Riedel team was in Suzuka in Japan to again guarantee pristine communication between the drivers and the teams and between the teams and FIA.

Sebastian Vettel moved to within four points of Fernando Alonso in the fight for the world championship, after Sunday's Japanese Grand Prix saw Red Bull dominate and Ferrari’s leader meet with another first-corner disaster. As Vettel sped into a lead he never relinquished, Alonso had a brush with Lotus’s Kimi Raikkonen and spun with a punctured left-rear tyre in the first corner. At the same time, Raikkonen’s team mate Romain Grosjean hit Red Bull’s Mark Webber and Williams’ Bruno Senna collided with Mercedes’ Nico Rosberg. 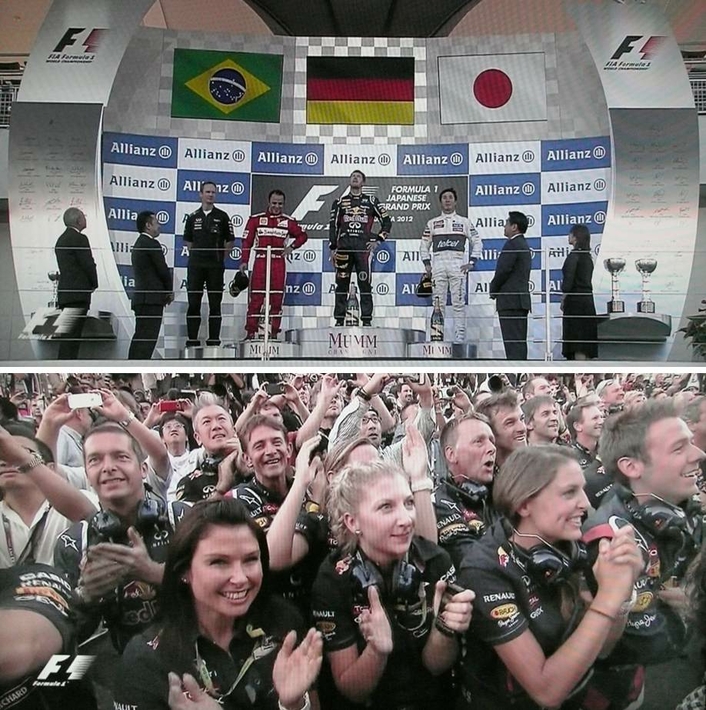 The safety car was deployed for just two laps, and thereafter Vettel picked up where he left off to score a win that brought his points tally to 190 compared to Alonso’s 194. He was simply untouchable. Behind him, Sauber’s Kamui Kobayashi valiantly held on to second place ahead of McLaren’s Jenson Button and Ferrari’s Felipe Massa, but the Brazilian leap-frogged both rivals during the first pit stops to snatch a second place that he kept without challenge to salvage something for Ferrari. It was his first podium since Korea 2010, and the performance may well cement Ferrari’s decision to retain him for 2013.