VRT, Belgium: Barco is the reference beacon in reference monitors 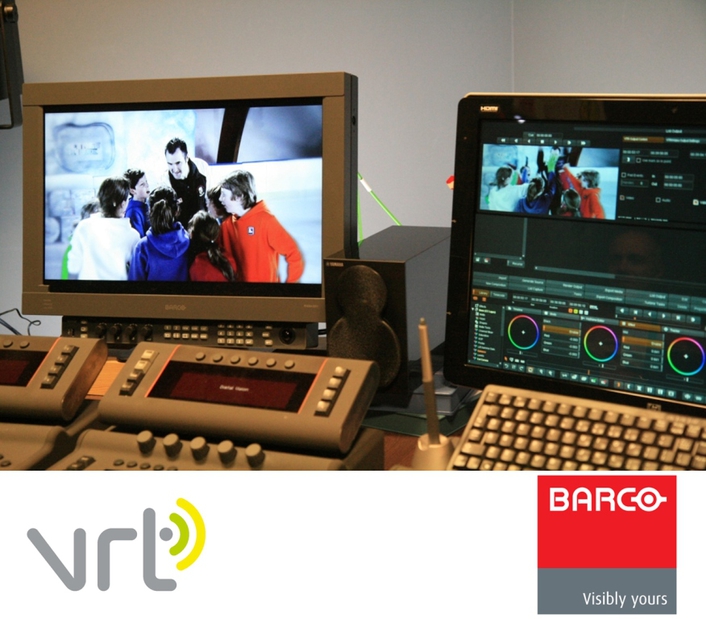 VRT installed Barco Grade-1 LCD reference monitors (RHDM-2301B)
Reference monitors have a straightforward, yet complex mission: to ensure that “what you see is really what you get”. To function as a real reference, they have to deliver images with an accurate, reliable color balance. In the early 1970s, VRT, the public broadcaster for the Flemishspeaking part of Belgium (6 million people), used Barco reference monitors to guarantee the seamless transition from black and white to color TV production.

The VRT's objective is to 'inspire, inform, educate and entertain’ a maximum number of viewers and listeners with high-quality radio and television programs. Besides providing good content, the VRT also aims to deliver the best possible images. It is therefore constantly expanding its HD offering. This digital transition makes the need forexceptionally accurate, high-reliability reference monitors greater than ever. VRT relies on the monitors of Barco, a long-term partner.

You could say that the histories of VRT and Barco are interlinked in many respects. Barco was set up in the 1930s as an assembler of radios and later introduced TVs to Belgium. The roots of VRT lie in the 1930s too, as a radio broadcaster. Their roads really crossed in 1969, when the then-called BRT purchased some Barco studio monitors that had been developed together with BRT experts. The technical perfection impressed broadcasters worldwide and Barco continued fine-tuning its products until 2001. Recent advances in LCD technologyand an acute market need for high-end reference monitors to support the digital shift, made Barco re-enterthe market in 2008. The return was warmly welcomed by the VRT.

“Reference monitors have to produce extremely accurate, consistent images that reveal any image defects correctly, without being glossed over. The monitors we used before 2009 were not really good enough to control the quality of our new HD offering,” said André Saegerman, manager Media Technology at VRT. VRT submitted a tender and extensively tested various competitive solutions. Barco confirmed its established reputation and came out as the most qualitative, color-stable and userfriendly reference monitor. So Barco and the VRT signed a framework contract for the delivery of RHDM-2301B LCD monitors. 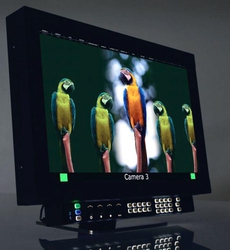 The RHDM-2301B integrates all the latest display technology to ensure the best color accuracy, image stability and motion handling. A 10-bit panel technology and 48-bit image processing capabilities (16 bits per color) help totruly reproduce a possible 1024 levels per color, resulting in over a billion possible colors and gray scales. The widegamut LED backlight that is used allows achieving the current color standard.

To make sure that what you see is what you get, the monitor incorporates advanced calibration sensor technologythat draws on Barco’s experience in markets like healthcare and air traffic control. It helps the display remain calibrated over a wide temperature range and for a long time, thereby eliminating the need for frequent maintenance or recalibration. The motion handling is excellent thanks to the high-speed 120Hz panel and scanning HD backlight technology.

In studios and OB vans 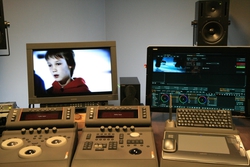 VRT relies on Barco monitors for various applications, both in the TV studios and in the Outside Broadcast (OB) vans. Saegerman: “We deploy them for camera shading, i.e. making sure that all the cameras match, while our camera and lighting professionals also use them during production, as they need an accurate representation of incoming feeds for source quality validation and for program and output monitoring. In addition, the monitors help the color graders inside our post-production center and our maintenance team when they have to fine-tune cameras.”

Ease-of-use
Everyone at VRT who works with the RHDM-2301B praises the monitor’s accuracy, color stability and reliability.Furthermore, the product stands out through its ease-of-use, said Saegerman. He illustrated this with an example: “The main menu does not obstruct the image as it’s not fully inserted on the screen. That’s only one of the many details that distinguish Barco from other monitors, thus making our long-term partner our preferred solution.”