Yellow Card for the Vuvuzelas! 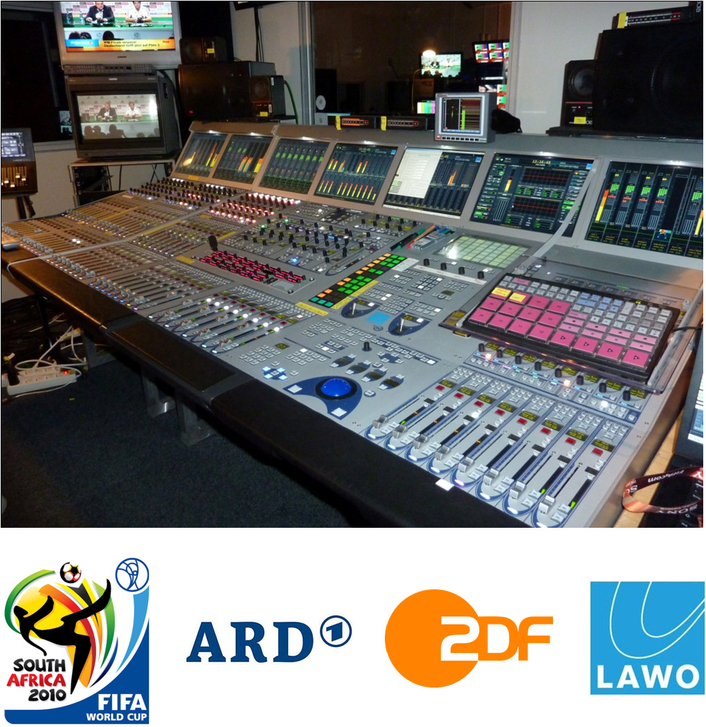 The Lawo mc²90 in the Audio Control Room of ARD & ZDF at the IBC in Johannesburg
The controversy surrounding the constant hornet-like swarming noise produced by vuvuzelas haunted this year’s Soccer World Cup since the very first games. Meanwhile, broadcasters had to resort to filtering the audio: “The ability to use the steep notch filters on a Lawo console’s EQ was extremely helpful in the creation of signals with reduced interference from the vuvuzelas,” explains Carsten Higler, technical director of ARD, the German public national radio and TV network.

ARD was responsible for planning at the venues, the SNG (Satellite News Gathering), and the DFB (German Football Association) headquarters, while ZDF – the other public national German broadcaster – fulfilled the same role at the International Broadcast Center (IBC) and provided the line management. With Swiss based Host Broadcast Services (HBS) being responsible for the production and distribution of all the audio and video feeds (global, as well as international audio and video), ARD contracted SWR for on-site operations. 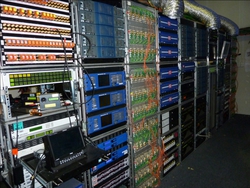 With the planning and preparation for this mammoth event taking approximately two years, the actual setup started roughly four weeks prior to the first broadcast (ARD’s Sportschau programme on June 5). Much of the equipment was sent over from Vancouver, but was held up in Durban due to a strike by harbour workers, resulting in a one-week delay and thereby making logistics the biggest challenge in the run-up to the tournament. “Because of this, we had to send personnel in earlier, to complete the setup in a reduced time-frame,” describes Higler.

HBS provided twelve feeds for the IBC’s control room, and up to 14 in the stadiums, depending on the match taking place. In addition, return lines from Germany, for transfer and switching to SNGs, DFB headquarters, and national OB vans at the stadiums, were handled in the IBC. With HBS once more acting as the host broadcaster, the infrastructure was comparable to that used four years ago in Germany. Nevertheless, there were some problems: “We experienced multiple power outages at the IBC, which further delayed the set-up. In addition, line connections to two undersea cables were initially prone to errors,” reveals Higler. 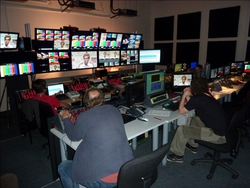 A mc290 was deployed at the IBC. According to SWR sound engineer Erich Ebert, this console offers a high degree of flexibility and easily lives up to all its tasks (the creation of a 5.1 output, among many others). The ‘level function’ was of particular importance, since it allows immediate control of all faders assigned to the VCA master. Plus the aforementioned notch filters. “Because Lawo engineers worked for HBS in the IBC, an efficient path was available for the fast exchange of information, and to deal with any problems,” continues Ebert.

All six OB van control rooms (provided by Alfacam for ARD & ZDF) featured mc266 consoles, while an additional mc256 was employed at the DFB headquarters. With Lawo technology in use at so many locations, sound engineers could be organized with flexibility, and crews at the stadiums switched smoothly between the six OB vans. “SWR uses a significant number of Lawo consoles, and we have had very positive experiences with them, especially in our large FÜ2HD OB van,” says Higler, as a final comment on the benefits of Lawo consoles.

Lawo, headquartered in Rastatt/Germany, specialises in developing, designing and manufacturing mixing consoles and matrix systems for radio and TV broadcasters, as well as for use in live events. Standards of high quality and innovative technology are supported by decades of experience in the field of professional audio technology. In 2010, the company celebrates its 40th anniversary.

Lawo’s product range covers digital audio mixing consoles for use in radio, broadcast, production and live applications, including the required software. In addition to the provision of matrix systems and audio networks, Lawo also carries out project engineering tasks and acts as a main contractor for radio OB trucks; these services include user training and maintenance. This high level of expertise results in a comprehensive support service for Lawo customers.