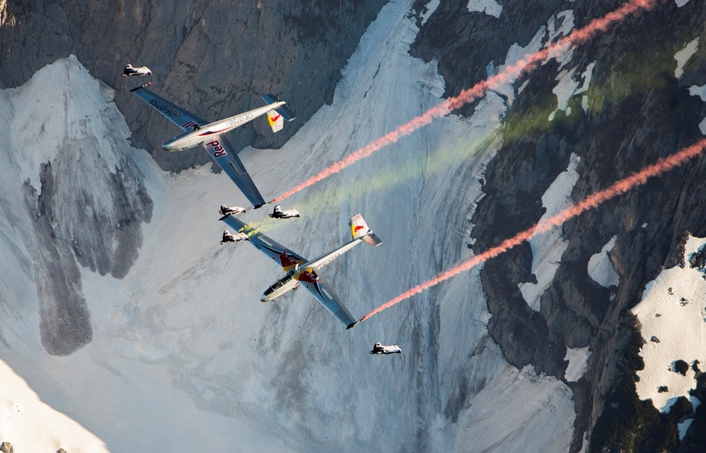 .
The Red Bull Skydive Team recently performed a spectacular performance high in the skies above Austria well worthy of any James Bond film. As part of the project Akte Blanix III, the five-man squadron set off in hot pursuit of two Blanix gliders cruising 4,000 metres above the ground. In one of the most daring wingsuit manoeuvres ever seen, the skydivers then inched their way towards the aircraft before flying along side by side at speeds in excess of 180km/h.

When the Red Bull Skydive Team meets up with the Blanix Glider Team, one thing is for sure – you’re not going to believe your eyes. The two teams, which have already wowed millions around the world with images of their breathtaking performances, recently upped the ante even further with the final part of their Blanix trilogy.

“Normally the idea is to stay as far away as possible from other flying objects. Instead, we headed straight for them! We were even able to look the pilots straight in the eye. I’ve still got goosebumps,“ explained Red Bull Skydive Team leader Paul Steiner, who played a major role in planning and coordinating the unique stunt requiring eleven people and seven aircraft.

“The gliders are constantly moving around,” added Georg Lettner an experienced member of the Red Bull Skydive Team. “It was definitely scary at times, but looking back it was an unbelievable experience. There are few things better than being able to look a pilot right in the eye as you fly alongside him.”

While the risks of the mission were plain for all to see, pilot Ewald Roithner was keen to underline how much preparation had gone in to making the stunt happen. “None of us are adrenaline junkies. We’re all just guys who are looking for challenges to make our lives more intense. The secret is to prepare everything very carefully so that you can push the limits without going too far. It’s all about professional planning, conscientious training and absolute trust.” 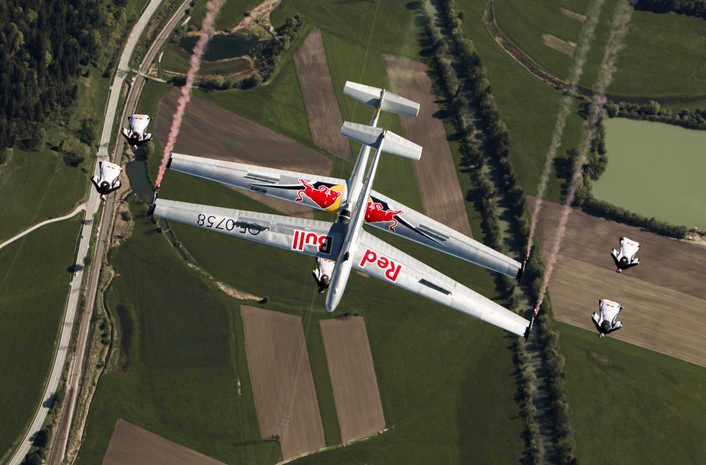 “Never before have humans and aircraft flown this close in formation. It is the first performance of its kind in the world,” said a proud Steiner. With the Akte Blanix trilogy now completed, the sparkle in his eye leaves no doubt that the next daredevil project is just around the corner: “Somewhere deep down the next idea is already brewing,” grinned the Austrian.