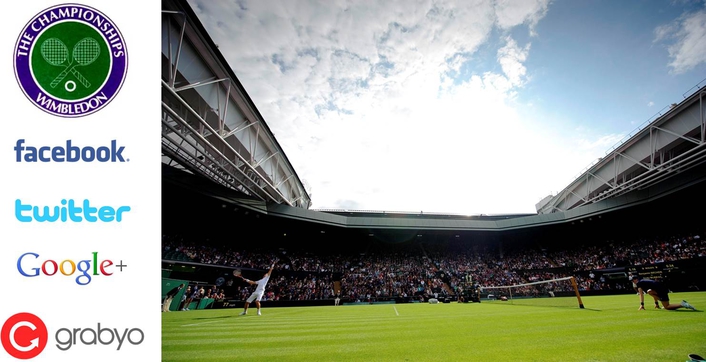 .
It already enjoys a billion-strong TV audience around the world, but for Wimbledon’s All England Lawn Tennis Club (AELTC) that wasn’t enough. In a pioneering move that will put The Championships firmly under the global spotlight this summer, Wimbledon is partnering with London startup Grabyo to bring near-live highlights to billions of Facebook, Twitter and Google+ users around the world.

The AELTC will use Grabyo’s social video platform to instantly share colourful clips from Centre Court, No.1 Court and No.2 Court. Anyone with access to Facebook, Twitter and Google+ will be able to enjoy the real-time clips directly within their feeds, whether on the web or using mobile apps and wherever they are in the world. Highlights will also be posted each evening on Wimbledon.com for those that want to catch up on action from the day.

The digital experience will be complimenting the live TV coverage, being aired in more than 200 broadcast territories in 2014. Alongside the broadcast coverage, tennis fans can enjoy Live @ Wimbledon, the AELTC’s live video and radio channel, delivered on Wimbledon.com and the official apps.

Clips will be anything from between 30 seconds and 60 seconds in length, with around 25-50 clips each day being broadcast. The Championships, Wimbledon will be running from 23rd June to 6th July 2014.

Grabyo recently revealed that 72% of its video traffic is mobile, illustrating how effective real-time social video is at reaching an increasingly mobile audience. Its platform regularly scales to hundreds of thousands of users within seconds as clips are shared.

Quotes:
“We’re really excited to be taking another leap forward in our ambition of giving fans an experience that is the next best thing to being at Wimbledon,” comments Alexandra Willis, Content and Communications Manager at the AELTC. “This will enable us to share engaging moments in real-time with those not already watching Wimbledon, to help bring The Championships to life online and encourage them to tune into the live TV coverage."

“We’re truly delighted to be involved in such a pioneering project with what is the longest running and most prestigious tennis tournament in the world,” comments Gareth Capon, CEO at Grabyo.

“We see huge and immediate spikes in traffic as premium sports content is shared to Facebook, Twitter and Google Plus. All of this is complimentary to YouTube, where video content can attract audiences longer-term,” comments Grabyo CEO Gareth Capon. “This is particularly exciting as it will be the first time a major sports rights holder has delivered real-time video highlights to a global audience across multiple social platforms.”

About Grabyo
Grabyo is the leader in real-time video. Its scalable, cloud-based platform enables broadcasters and content rights holders to instantly create, distribute and monetise real-time video clips across any platform and device. With rich experience in industry, Grabyo also provides broadcasters and rights holders with strategic guidance and support in order to extract maximum value from real-time video content and capitalise on the significant commercial opportunities in sharing live TV across web, social and mobile. Grabyo launched in 2013 and works with broadcasters in Europe, North America and Asia Pacific, as well as some of the most popular TV formats and largest advertisers globally. As a mobile first video business that plays into social media, Grabyo operates in all three of the most important growth sectors of the $520bn global advertising industry.