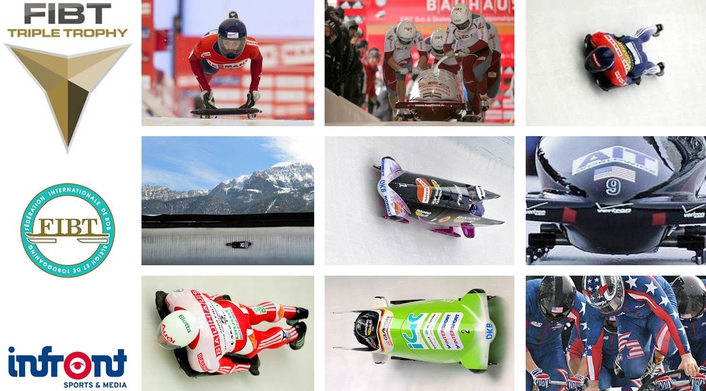 FIBT and Infront jointly enhance commercial appeal of bobsleigh and skeleton events, introducing new 100,000 Euro jackpot
The 2012/13 FIBT World Cup season is adding a new highlight to its calendar – the FIBT Triple Trophy. The International Bobsleigh and Skeleton Federation (FIBT) and Infront Sports & Media, its media and marketing partner for the FIBT World Cup and World Championship events, are introducing the Triple Trophy as an innovative 100,000 Euro jackpot concept, which requires athletes from each discipline to win three pre-defined race highlights within the season. Also in commercial terms the FIBT looks forward to an exciting and fruitful season: All sponsorship packages available have been successfully sold by Infront for the FIBT World Cup as well as the World Championships.

New jackpot incentive
With the introduction of the FIBT Triple Trophy, Infront together with the FIBT is aiming to raise the appeal of the event for fans, media and commercial partners and at the same time provide a unique incentive to the bobsleigh and skeleton athletes. The Triple Trophy concept requires one athlete or team from across all FIBT World Cup disciplines (women’s bobsleigh, two man and four man bobsleigh and women’s and men’s skeleton) to win three pre-defined races within their respective discipline and within the same season with the incentive of prize money totalling at 100,000 Euro.

Triple Trophy concept to boost sport and image
The FIBT and Infront aim to raise the profile of the sport across the board – also creating an image and brand unison with the new Triple Trophy series. A logo along with a corporate identity has been developed to ensure consistent branding at the three event locations. The visual identity will guarantee impactful and long-lasting image association for the Triple Trophy as a highlight event within the Viessmann FIBT World Cup. Featuring graphical elements based on the form and geometry of ice crystals, the logo picks up the font and color scheme of the FIBT and symbolizes the “Triple” aspect by depicting three corners.

Ivo Ferriani, FIBT President, said: “The Triple Trophy concept presented to us by Infront is an exciting and promising approach that will add true value to the disciplines of bobsleigh and skeleton racing. It creates a new feature to excite the fans and is an additional highlight within the FIBT World Cup. The concept forms the next step of the journey for us and will help boost the position and profile of the FIBT events in the world of winter sport.”

Bruno Marty, Executive Director Winter Sports at Infront, said: “Since 2003 we have embarked on a path of expansion for the FIBT that has resulted in increasing levels of exposure and raised the commercial appeal of the FIBT events for sponsors. Our target is always to surprise our partners with innovative concepts that enhance and develop the sportive value on a global scale – the FIBT Triple Trophy will further strengthen the series. It increases the commercial value of the Viessmann FIBT World Cup as a whole. The media and broadcasters will be able to take advantage of the additional highlight and there are extended sponsorship opportunities – including a role for a potential FIBT Triple Trophy Presenting Partner.”

Winning the Triple Trophy requires tremendous skill and athletic performance – the challenge demands that athletes master three different tracks in a row. This is possible; however, to date only two athletes/teams have achieved Triple Trophy status in the history of the series: The four man bob of Andre Lange (GER) in 2009/10 and Frank Rommel (GER) in men’s skeleton in 2008/09.

Major international brands line up
The FIBT season gets underway this week with the Viessmann FIBT Bob & Skeleton World Cup in Lake Placid, USA with a full inventory of sponsors eager to associate their brand with the FIBT events as a result of its growing appeal. Viessmann (heating systems) leads the pack as Title Sponsor of the Viessmann World Cup and will benefit from the wide reach of the events boosting its brand awareness worldwide. Crystall Lefortovo (beverages) is involved as Main Sponsor, Omega (watches) as Timing Partner and Adidas (sports apparel) as Official Supplier.

All sponsors will profit from the wide scope of media coverage. This year media agreements have been sealed with broadcast partners on each continent ensuring wide reach for sponsor brand messages in more than 30 countries. Last season, coverage of the FIBT World Cup competitions reached a cumulative audience of 499 million viewers watching a total of 857 broadcast hours. The FIBT World Championship gauged a cumulative audience of 81 million from a total of 182 hours of coverage across 12 countries and this year levels are predicted to increase further.